KILDARE MAN IN LONDON: The death of the fried breakfast

Robert Mulhern on his mission to find a proper fry up 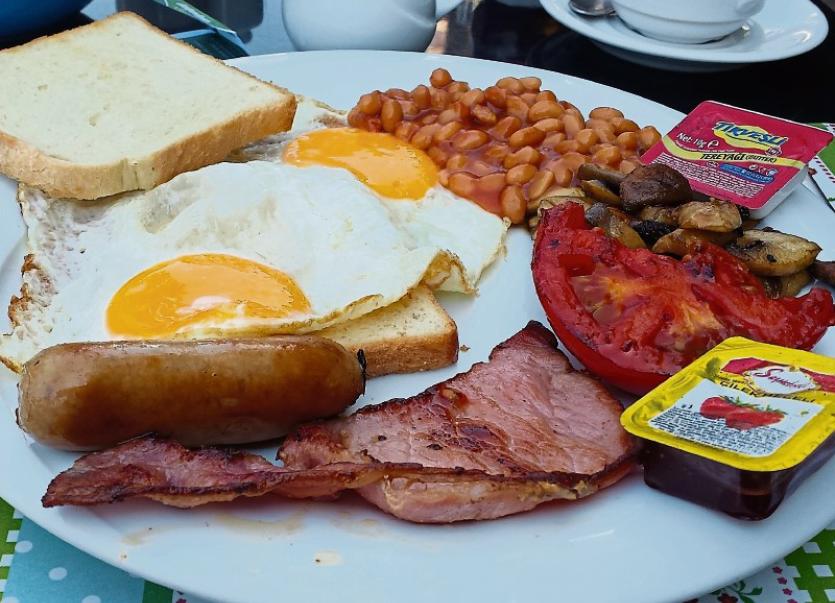 I flew into Cork recently on the early flight from London. From the moment I woke, I couldn’t stop thinking about breakfast.

On the train through Redhill and Purley, I could picture myself parked up in some warm cafe by the Lee, curling the crust of a brown loaf around an egg.

I fell into a food-like coma, dreaming of some of the best breakfasts I’ve ever had — Costello’s in Belfast’s Ardoyne.

The High Cross Inn at Moone.

Say what you like about the Brits, but they’ve coloured their capital with the kind of cafes that serve the breakfast experience customers like me are looking for — a sea of beans, a mountain of chips and cups of tea for 80p.

But, increasingly, this kind of breakfast is on the run, pushed out by a phenomenon I now call breakfast snobbery.

Don’t get me wrong, I enjoy an avocado as much as the next environmentally-friendly eater. Probably more. But crushing this green-peak-like thing with a fork, squeezing a lemon over it and serving it up on a slice of sourdough bread does not equate to six pounds worth of value.

And something I find similarly distasteful in now-sophisticated breakfast land — a painfully cheery student rocking it out behind the counter, marker in hand, wanting to write my name on a coffee cup.

Already, the creep of this new experience has stolen into Kildare to colour our Main Streets.

But down in self-proclaimed People’s Republic, where Corkonians delight in telling us how they do it right, I thought there would be sausages spilling out the doors onto Oliver Plunkett Street.

“We don’t do that type of breakfast here,” one waitress told me. “And not even the vegetarian edition!”

It was a withering dismissal, and the situation grew increasingly desperate as I struck ever deeper into the city in search of the lost breakfast.

Poached eggs? Sure, but only served with hollandaise sauce and smoked salmon.

Another establishment held the promise of hope in the form of black pudding. Lovely? But served with a deep berry marmalade.

Eventually, I thought I’d cracked it on Washington Street, but really I should have known that no self-respecting breakfast joint would sell craft beer, and it was no surprise, really, when my poached eggs arrived on a piece of slate.

And I thought this fad of serving food on material designed to go on your roof and keep the rain out had passed.

This moment marked the end of a very forgettable breakfast week, that featured another major lowlight in the form of The Love Cafe in East Dulwich.

Yeah, I know, the name carried its own health warning. But I had to visit Denmark Hill hospital, and there was nowhere else open. As you might expect it, it was the kind of place that inhabits the opposite end of the spectrum to, say, Tougher’s on the road to Newbridge.

That morning, staring at the miserable offering I was served up, I made a promise to myself that the next time someone tried to convince me that a portion of toast constitutes just one slice — well, I’m up and leaving.

Possibly — and coffee aside of course — Naas now has become too bourgeois to cater for morning food diners like who, like me, want the kind of no-frills-tar-like tea breakfast experience a greasy spoon will supply.

In fact, I’m scratching my head trying to think if Naas ever had an establishment that built its name on the fairly-priced cooked breakfast alone.

In the cafe that used to live over the old Gem, maybe?

And increasingly now on return visits, and Swans on the Green aside, I find I have to get in the car and drive to find it.

In latter months, I’ve sought solace in The Final Furlong in Kilcullen, and was going there when it was the Copper Kettle: simple, clean, warm, friendly, and with a monster feed with change from a tenner. Crucially, they give you a big pot of tea.

And driving in the opposite direction — The Johnstown Inn, where again you can enjoy the novel experience of someone coming to take your cooked breakfast order, and then cooking after you’ve ordered.

When the now default experience for places serving cooked breakfast is to deep fat fry everything and dump it into large vats, buffet style.

But on Washington Street in Cork that morning, I resigned myself to jumping in the car and having to make do with a breakfast roll at the next available petrol station.

I wasn’t too many mile down the road when I discovered that that, too, is a relic of another time!