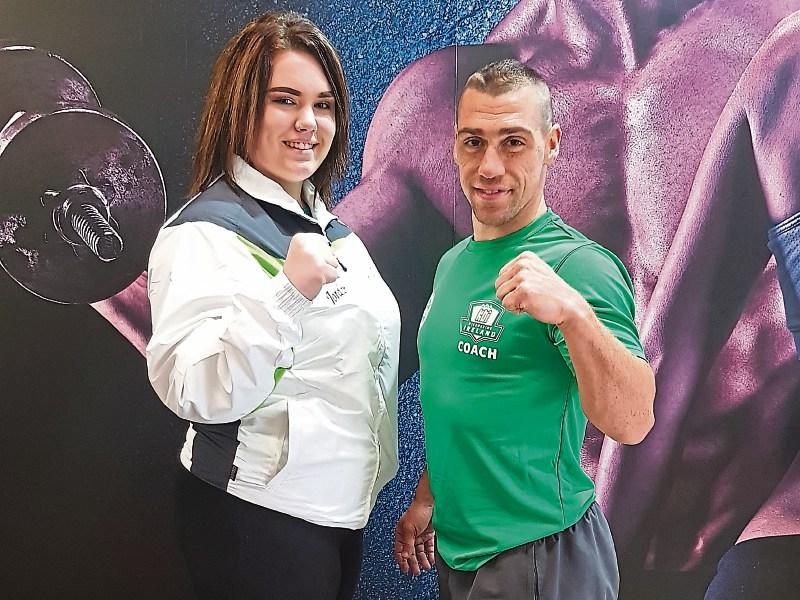 Jordan Doran has just turned 17 years but for one so young has achieved an amazing amount of success in the world of kick boxing.

Jordan lived in Ardclough until she was three before the family moved to Derrinturn where they still reside. Jordan's mam, Sarha (Ennis), was originally from Boston Road, Ardclough, while dad, Tommy is from Straffan son of the late Michael and Dympna Doran.

Jordan has a 12 year old sister, Shannan and a 7-year-old brother Shawn and she (Jordan) is in her final year in Oaklands Community College, Edenderry.

Jordan, in her own words “was never an active child and would have been quiet happy sitting at home.”

However at the ripe old age of six she got involved with kick boxing and training with Hurricane Martial Arts.

She picks up the story.

“Since that first time that I stepped on the mats my passion for the sport grew. I enjoyed every second of training. I was a very headstrong child which was a good thing since I didn't actually win at a competition for two years but this taught me a valuable lesson.

“It taught me the true meaning of discipline, commitment, dedication and hard work. And this has benefited me not only in my sport but throughout life as well.”

Jordan began travelling to WAKO (World Association Kick boxing Association) World and European championships at the age of 12 and since that point she has attained many titles across three disciplines: Point-Fighting, Light-
Contact and Kick-Light.

The Derrinturn girl, who is sponsored by Nature Valley, is one of very few Irish athletes to compete in all 3 tatami disciplines and is the only female on the Ireland Junior squad to do the three.

Jordan explains that “after beginning my journey in Light-Contact and Kick-Light, I made the decision this year to leave Hurricane Martial Arts and transfer to Red-Star in Finglas to develop my skills in these two categories.

“Since I joined I have been welcomed and treated like I was always a part of their family which is everything a Junior Athlete could hope for, and for that I am extremely grateful.”

Jordan still trains with Hurricane at least once a week and, as she confirms herself “I am truly honoured to be able to do so.”

Jordan is off on her travels again this week (September 15 to 23) when she represents her country in Jesolo, Venice in Italy in the WAKO Junior World Kickboxing Championships.

Something tells me we will be hearing a lot more of Jordon Doran is the not too distant future.

Some of the many titles Jordon Doran has won to date: