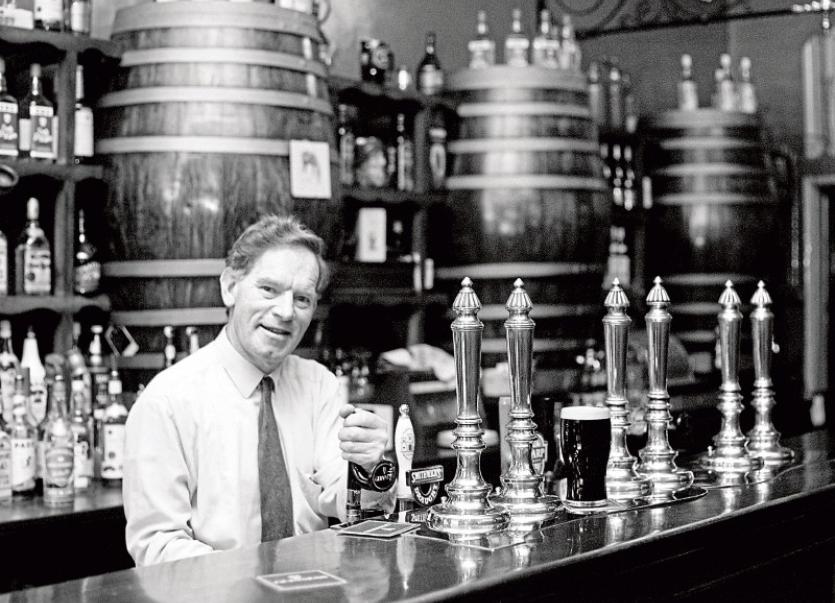 A quarter of a century ago, Naas photographer Tony G Murray captured a series of black and white portraits featuring well-known Naas faces. The photographs, which were the start of Tony’s own photography business, have become iconic in the town. We delve further into the genesis of the original exhibition.

Where did the idea come from to capture Naas in a series of 26 local portraits?

The idea for the exhibition began with a chat over Sunday lunch. My wife Denise’s mum, Gertie, with her husband Denis, ran a successful business in Naas for many years — Coughlan’s Drapery.

My own dad, Michael, was a shoe repairer in Navan. After both businesses closed, we began to talk about the well-known businesses still in the town of Naas, the people who ran them and how this gave a town its real personality.

I thought it would be great to capture portraits of personalities in Naas town, and it could possibly make a great photography exhibition.

How did you decide on who to photograph?

I wanted people were known in the town for their work; people everyone knew and admired, who were part of the community.

Why did you shoot the photos in black and white?

My Dad’s hobby was black and white photography. He even had a darkroom back in the 1950s and early ‘60s.

How did you choose the setting and pose for each portrait?

As well as the ‘at work’ image, I thought, why not capture a second portrait of these business people showing what they do in their spare time or ‘at play’. And so, the exhibition ‘At Work and At Play’ was born.

The A-Z index was a quirky way of limiting the selection and applying a portrait to each letter of the alphabet as in 'the Butcher, the Baker, the Candlestick-maker’.

However, I could only have one ‘B’ so that’s when the research began.

Do you have a favourite Naas portrait?

Back in 1993 there were no phone cameras, so asking someone if I could take their portrait was very personal and it required a certain amount of trust.

I was fairly new to Naas then, but Tommy Fletcher’s was a place that always had a great pint and Tommy was delighted to be asked.

He was the very first person I photographed. It’s a lovely relaxed shot.

I had a pint on the house from Tommy, and it wasn’t even Christmas.

Is there one portrait that you've been asked about above all others?

Bill McCormack — and it’s one I’m really proud of.

I set up my single flash mono-light in his bar and Bill walked over leaned on the counter with cigarette in hand and said: ‘ok, what way do you want me?’ That that ended up being the photograph.

When Bill’s son Conor was renovating the pub, he came to me and bought 10 of the portraits for display in the back bar, including the one of Bill, of course.

In the years since, did you ever think you missed someone you would include if you were back in ’93 again?

Larry Swan — he has grown his business to become one of the great community meeting points in Naas.

He has a great business acumen and what he has achieved over the last 25 years is admirable.

After 25 years, how do you compare Naas then and Naas now?

The development of retail parks on the perimeter of the town have taken the daily shop out of Naas town centre.

Twenty five years ago, coming into town from Dublin, one was greeted with the road sign ‘Naas — a nice place to shop.’

However, now Naas, which was once a bustling town during the day, has become a lot less busy in the daytime but instead has a vibrant evening business with the restaurants and pubs thriving.

Has some of the town’s unique energy from 1993 managed to survive?

The same traits and characteristics that were admired in 1993 are still admired now.

The businesses that continue to attract people into the town are those which still provide a bespoke and personable service. They know you and you know them. It’s a personalised shopping experience.

Why does the exhibition endure, do you think?

People love people. These portraits are not selfies that fade with time, they are genuine portraits of people and hopefully they capture their character and personality.

These people allowed me into their lives for a short time to capture a moment in their live.

It is what I strive for each time I capture a portrait of a person or family in our portrait studio in Naas, hence our strap-line: ‘capturing memories for the future”.

Would you do another Naas A-Z now?

Probably not, even though revisiting this exhibition has really shown me how much people appreciate portraits, which capture a personality and a person’s character.

It’s nice to see many people carrying on the family business: Conor taking over from Bill in McCormack’s pub, Nikki Teahan taking over from her mum Carmel as an optometrist, and Derek taking over from Leo in Nolan’s Butchers. A lot of them are still there, but sadly about eight of the original 26 of those photographed have passed away.

But if you were to do a 2018 portrait exhibition of Naas what might it look like, in a general sense?

I would focus not just on the business people but also those who play an active role in the community and have a real sense of social awareness.

I suppose these people form the real heart of the community and give a personality to the town.

These are the real people who make a town special and a still make Naas a great place to live.

I suppose you could call them the ‘Hidden Heroes of Naas’.