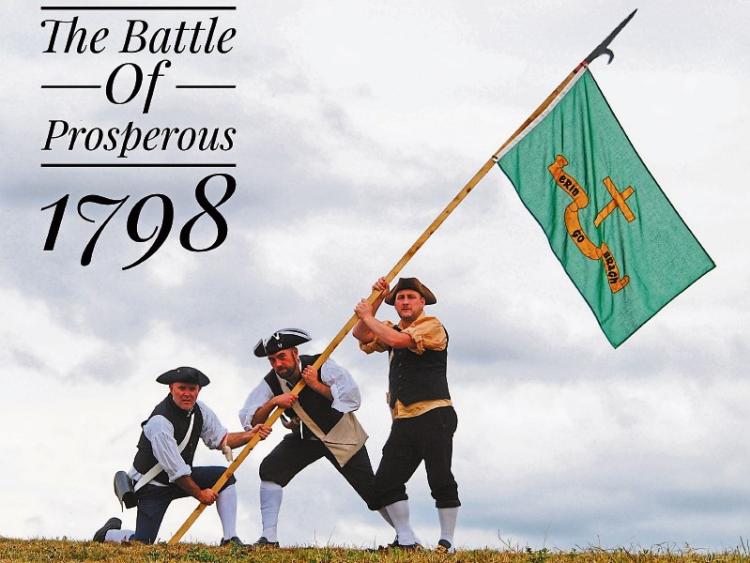 The cover of The Battle of Prosperous 1798

Last Sunday in Larry’s pub in Prosperous a local man launched a CD of Kildare songs.

Nothing terribly unusual about that. Local man, local songs, local pub — except that the genesis of the album, and one of the songs in particular, has a most unusual tale.

The lyrics to the song The Battle of Prosperous are more than 200 years old, and it’s likely that nobody alive today has ever heard it sung before this year.

The musician, Darren Brereton, released a CD of Kildare songs on Sunday last, September 2. This is a project that has stemmed from Prosperous Heritage Festival, on whose committee he was a member this year.

The Heritage Festival was very successful and celebrated the links between the village and the 1798 Rebellion.

In the process of researching the history of the time, Darren and his fellow organisers uncovered affidavits from people who were alive and living in Prosperous at the time the rebellion began.

“We also uncovered many poems, songs, witness statements and even came across some extracts about the Battle of Prosperous in some old British military journals,” he explained to the Leinster Leader.

“It was truly an exciting journey piecing the story of how things transpired together and read into the role of the village in the rebellion. When you start to read information presented from books from either side of this period, you really do start to see the story unfold in front of your eyes.

“For the rest of my life I know that every single time I walk down the old Main Street of Prosperous, I can picture the few days and where certain events took place.

“We are very lucky that a lot of the old buildings from that time are still standing and in pristine condition, considering they were built in 1780. To have so much detailed information about where you come from buried in your memory banks is a truly amazing thing for anyone into local history.”

One of the committee members Joe Murphy, who is a huge local history fan, presented Darren with a page of lyrics last winter called The Battle of Prosperous. After much research there was literally no known music they could find for it.

The only information they could find was that it was a very popular song that was sung in Prosperous and surrounding areas following the 1798 Rebellion, but unfortunately it got lost in time, like much of Ireland’s songs and stories. Darren was asked to try and put some music to it by Joe.

“What resonated with me in the context of the lyrics was the story deep within it. It wasn’t just your typical rebel song. It had the characteristics of a typical rebel song but there is a deeper and more emotional story in the lyrics. For me it is all about the story of a man called Edmond Lalder.”

Lalder was a suspected United Irishman and when the British soldiers arrived to Prosperous in search of stolen weapons and suspected members of the United Irishmen, he was one of the first they came looking for.

They had received intelligence from a spy that he was in the village at the time. The soldiers first went to his house where his wife and newborn baby were. After failing to give up the whereabouts of her husband, the soldiers murdered her and her baby in cold blood by bayonet blades.

The soldiers then went to his parents’ house looking for the suspect. Again, just like his wife, his parents would not give up his whereabouts so the soldiers murdered them too.

“The fact that they feel like they had to wipe out his family really goes to show the tensions between the Irish Catholics who wanted liberty and equality, versus British forces. It was barbaric and didn’t just happen in Prosperous,” Darren said.

“It is a sad song but in the lyrics of the song we do find out that poor Lalder got his revenge. He found the soldiers involved in the murder of his family and piked them to death while the barracks of Prosperous was stormed.”

Darren says there are two other songs on the CD and a spoken piece.

The songs are Sean Bhean Bhócht and The Curragh of Kildare and the spoken piece, which was written by Mario Corrigan is called If We Dare.

The Prosperous Heritage Festival was attended by over 1,000 people back in May and was recognised nationally by history fans and reenactment groups as the biggest 1798 commemoration of 2018.

“It’s something I am proud to have been involved in,” Darren says. “I put a video up on the Facebook page performing the song and within 24 hours it had thousands of views and hundreds of shares. I was quite shocked about that.

“When we had our launch before the festival, members of Kildare County Council asked if I would be interested in recording the song. So,of course I said yes!

“They funded a day in the studio and the CD duplications for the project. It was a great experience.

“For all my years playing music, I have never seen my own name on the front of a CD before.”

He said that there were e certain key people involved in the project that he wanted to acknowledge.

“Mario Corrigan from Kildare Decade of Commemorations and Kildare library was a driving force behind this ever happening. “And Joe Murphy, for his vision of having the commemoration stemming this project... and also his extremely good photography work!”