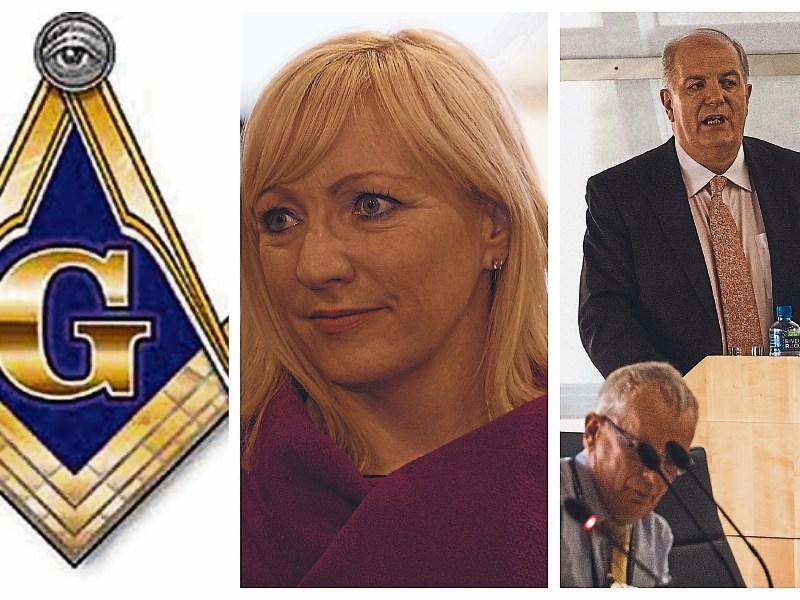 Cllr Fiona McLoughlin Healy queried if Mr Duffy was a member of an oath-based secret organisation, like the Freemasons

Just days after he denied being a member of any oath-based organisation other than the Catholic Church, presidential hopeful Gavin Duffy has had to deny being a Freemason after a video emerged on Twitter of him appearing to speak knowledgeably of the organisation.

Mr Duffy, who has family links in Naas, and who made a pitch to the full council last Monday for its nomination was asked by Cllr Fiona McLoughlin Healy if he was a member of an oath based secret organisation.

In response, he said that other than being baptised, he was not a member of any oath based organisation.

However yesterday a video emerged of much younger Duffy him speaking to camera about the Freemasons, emphasising its “philisophical attractions” of the organisation.

A video of Mr Duffy speaking about the Freemasons

Cllr  McLoughling Healy responded on Twitter and addressed him directly saying that having seen the video his response was “more disingenuous now”.

“Why, when you evidently understood what an oath-bound secret organisation was, did you dismiss the question as to whether all potential candidates should declare secret memberships by referencing your communion and confirmation?” she asked.

In response, Mr Duffy responded that “For the record this was a programme about the Free Masons produced by the late Vere Wynn Jones and I was merely the Presenter. I have never been a member of the Masons.”

Responding to her directly, again on Twitter, he expanded: “Hi Fiona I presented a programme on the history of the Free Masons in Ireland back in the 80s. I have never before that one day’s filming or since had any association with the Masons and was never a member nor took an oath.”

But that was not the first controversy to emerge from his appearance in the council chamber in Aras Cill Dara last Monday.

A brochure handed out to councillors on his behalf featured the logo for Kildare’s Local Enterprise Office (LEO). Again it was Cllr Fiona McLoughlin Healy who queried it. She wondered if it appeared that he was being endorsed by Leo.

The brochure from Mr Duffy with the LEO logo

Initially he responded to her yesterday, that he had “worked with Kildare LEO for many years and for the purpose of this brochure I have permission to use the logo”, although he added that it was “certainly not intended to political endorsement”.

However, later he rowed back admitting: “Fiona, permission was never sought or granted to put the The LEO Kildare logo on a photograph of a LEO Kildare event that appeared in the 40 folders, one each for the Kildare Cllrs containing a copy of my speech yesterday afternoon.”

He accepted that although not intended, the position of the logo on his brochure could give the impression that LEO was endorsing him.

Fiona permission was never sought or granted to put the The LEO Kildare logo on a photograph of a LEO Kildare event that appeared in the 40 folders, one each for the Kildare Cllrs containing a copy of my speech yesterday afternoon.

“I now accept it could be, I apologise for the infringement and thank you for drawing my attention to it.”

In a later, somewhat rueful tweet, he admitted: “I was caught rapid made a mistake in an earlier tweet and corrected it rapidly.” He clarified that he had run a number of workshops for LEO, and that it was paid work.