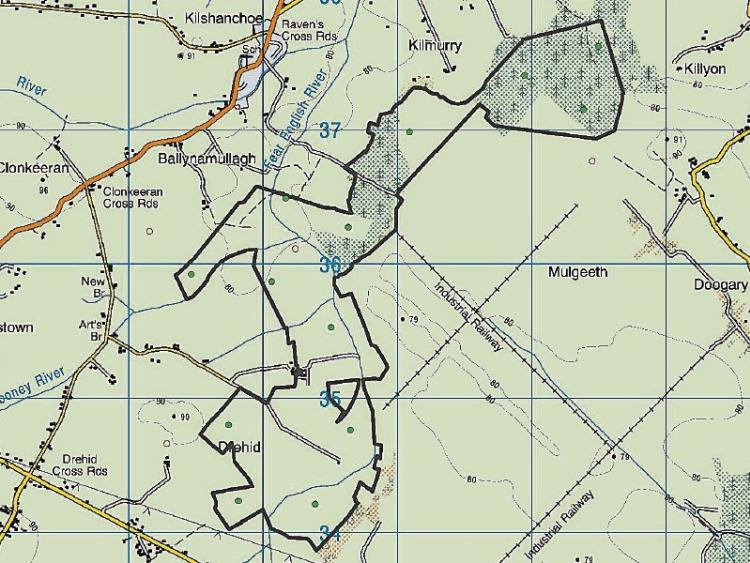 The proposed locations of the turbines

A new community group set up to fight wind farm plans for West Kildare is stepping up its campaign against the plans.

Many residents living in the Drehid/Carbury area are furious with Element Power’s proposals for a 14 turbine wind farm.

It reports "Such was the crowd in attendance that the meeting continued until 11pm. Seamus Langan Chairperson of the newly formed group opened the meeting and welcomed everyone including three councillors who attended.

"Seamus declared to the packed house that 'we the community are the custodians of our landscape and environment and it is up to us to protect our countryside.'

"He added that 'this community is ready to fight Element Power on the proposal of 14 industrial wind turbines, 169 metres high and around 4 megawatt, much more powerful than those of the Maighne wind farm turbines which were refused by An Bord Pleanala on two occasions'."

Members of Kildare Environmental Awareness Group were also present and pledged their support and experience to the new group.

"Images of an existing wind farm built in Banagher, Co. Offaly by Element Power, and subsequently sold, were shown to the audience. This demonstrated the horror of having an industrial wind turbine 169 metres high as close as 505 metres from a family home and others between 700 to 900 metres from other homes. Gasps of disbelief were heard from the audience," said a spokesperson.

"Questions were asked as to why TDs have sat on their hands for the past four years concerning the wind energy guidelines which allows this to happen to family homes. It was mooted to the meeting that to protect our community we now need to put forward our own candidates in the forthcoming local and general elections."

Pledges of support to the group were given by Councillors McEvoy, O' Cearuil and Weld.

A further question was raised in relation to the Kildare County Development Plan and and the reference that this area of County Kildare was suitable for wind.

The spokesperson said "Councillor Weld replied that 'they were not privy to this information.' Councillor McEvoy stated that 'the County Development Plan has to be consistent with National Policy."

The meeting concluded with a letter of support read from South Kildare Against Spin (an umbrella member of KEAG) which stated; "Your lives, your peace, your physical and mental health are at risk."

"The mood of the community on leaving the meeting was sheer determination to fight the wind farm proposal and protect their homes. The next meeting of Drehid Against Turbines in the Castle Inn will take place on Wednesday 5 September at 8pm," they added.

Element Power has said that thousands of people live beside wind turbines all over the world without any problems. It said it has embarked on public consultation with the homes in the Carbury/Drehid area about the plans prior to submitting them for planning.