WATCH: Kurt Cobain's family discuss his youth and his legacy at Newbridge Silverware

Trip to Ireland is healing, his daughter Frances Bean reveals 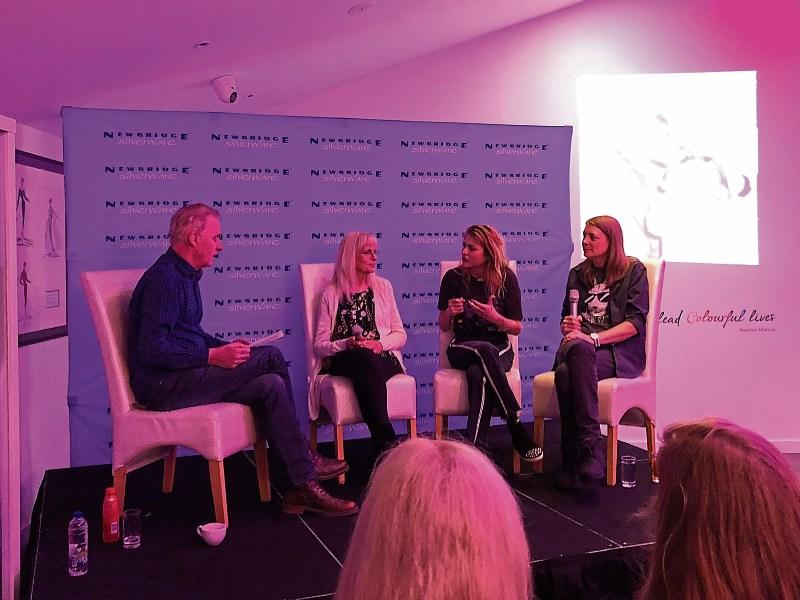 The mother, sister and daughter of Kurt Cobain took part in a question and answer session this morning at Newbridge Silverware.

Questioned by well known RTE radio host Dave Fanning, the three women, Wendy O’Connor, Kim Cobain and Frances Bean Cobain gave accounts of their relationship with the man who, to quote Mr Fanning, was behind “the last great movement in rock”.

Kurt Cobain died on April 5, 1994 was the lead singer of Nirvana, a grunge band which, in a reasonably short career, established itself as one of the greatest bands of all time.

The event took place to mark the start of the 'Growing up Kurt Cobain' exhibition about the musical legend which will run at Newbridge Silverware until the end of September.

The Museum of Style Icons will house Kurt’s drawings and sketches along with clothing, hand-written lyrics and the only known car Kurt owned during his life, a powder blue 1965 Dodge Dart.

The exhibition includes intimate artifacts donated by Cobain’s family. It is, his mother and explained, something of an attempt to wrestle the man from the myth.

Frances, his daughter, said that while his well established public persona was that of a mysterious prince of darkness, he was not like that in real life.

He was, his mother said, “the sweetest little devil” and very loving, as a boy.

His sister Kim recalls that “disco was played in the house,” but she also recalled Kurt writing on one of the walls of the house “Disco sucks”.

His family recalled him as an artistic boy, with a great ability to draw even at a young age. His sister Kim recalls going to see Nirvana in tiny clubs before they were a big act, and also recalls him making her pay for their first record!

His mother, Wendy, had come from an artistic family, with numerous relatives involved in a variety of artistic endeavour.

She relayed her first hearing of Smells Like Teen Spirit, which was their first and possibly best known hit. She said she and Kurt were at home when he played it for her. As a music fan, she loved it, but she knew it would be huge and that he wasn’t ready for that level of fame.

Frances Bean Cobain has a slightly separate story to the other women in that she is the child of two famous parents (her mother is Courtney Love, the lead singer of band Hole) and she was famous, as she told Dave Fanning, before she came out of the womb.

She was still a toddler when her father died. She made the point that while others whose parents have died young will have photographs or maybe a home video to remember their loved ones, because of his fame, she had what she called “an arsenal” of information with which to get to know him.

“It’s one of the most humbling experiences of my life to have people tell me how my father’s words have changed them. That’s beautiful,” she added.

She had her own difficulties own, and had struggled with substance abuse, but has now come out the other side of it, with a good appreciation of what lead her there, and how, as she told Mr Fanning, it might have been a good thing for her to have gone through it.

Wendy O’Connor became emotional when speaking of her granddaughter. She felt Frances never had the chance to get to know Kurt.

She also spoke of a farm she lived in the years after his death., which she described as a sanctuary. “I healed in the garden,” she explained. Frances recalled the farm as a “grounding experience”.

She said that Frances reminds her of Kurt, “most particularly her compassion,” which she felt was a side of his personality not necessarily well known about.

When asked by Dave Fanning if she was proud of Frances, she replied: “Absolutely. I knew she would make it.”

Frances concluded the question and answer session by noting that “it was important for us to come to Ireland. This is where our roots are (they’ve been traced back to an ancestor who left Tyrone on a famine ship) this is our healing place.”

She said that her aunt and grandmother had never really travelled outside the US.

“I’ve been here before, and it was super-healing for me as a child, and I wanted to come and be part of this experience with them. This reason this (trip) is cohesive and healing is because it’s in Ireland.”