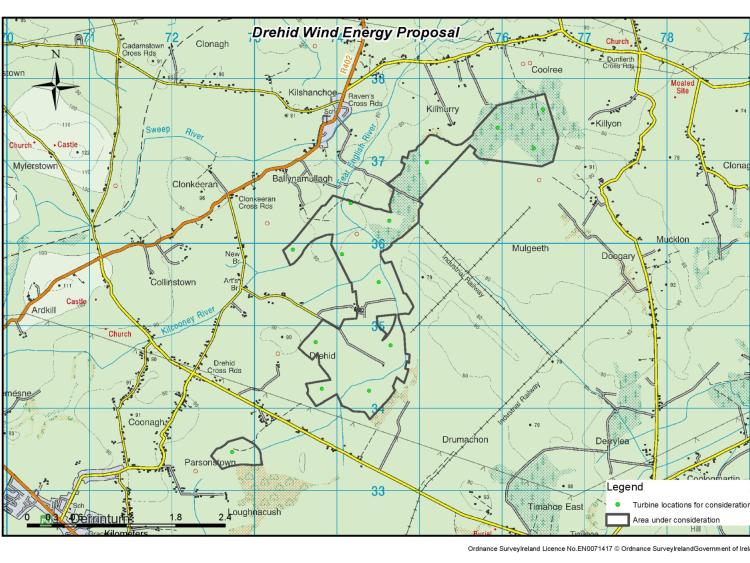 The green dots marked the proposed location of the turbines

Proposals for a scaled back 14 turbine Kildare wind farm are up for discussion as Element Power plans to embark on a major public consultation campaign.

The company revealed last week that it had hand delivered letters to 180 homes in the Drehid area informing local residents that it is proposing to apply for permission for the 50mw Drehid section of the previously refused Maighne Wind Farm.

That application for 47 turbines was refused by An Bord Pleanála due to concerns about the spaced out nature of that development and the extensive cabling resulting in major road disruption.

Over 800 submissions were made from members of the public including two groups — Kildare Environmental Awareness Group (KEAG) and Donadea Against Turbines.

Element Power asked for a judicial review of the decision and the High Court asked An Bord Pleanála to look at it again. They re-examined the case and refused it again.

Last week, Pat O'Sullivan of Element Power said the company had taken on board the concerns raised by the council and the planners. He said the County Development Plan had earmarked the Drehid landscape as “robust” enough to accommodate a wind farm and disruption would be minimal as less cabling would be needed.

“The council has said it would be a suitable area in the county for a wind farm development and we want to work and engage with the community, talk to people, to get feedback, get their views. This is not set in stone, it is a proposal and we can go back to the designers with that feedback. We won't be able to please everyone but we can work with people to achieve the best possible outcome,” he said.

He stressed he also wanted to hear from residents about projects they would like to see developed as part of a community benefit scheme.

The company's community liaison workers will be calling to houses over the summer. Anyone who wants to find out more can email enquires@elpower.com or call 057-9361540.