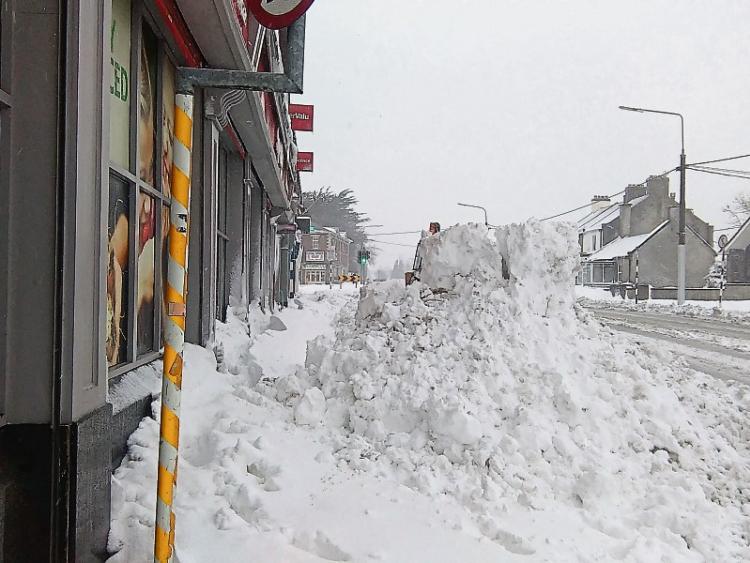 Snow piled high outside the SuperValu store on March 2

So, how was it for you? The Big Snow of 2018. Maybe you tired quickly of the grim news emanating from Met Eireann’s equally grim looking building in Glasnevin and took to the bed.

Perhaps, while the rest of us fretted about diminishing bread and milk supplies, you lumbered past the supermarket food queues and exited with a slab of Scrumpy Jack under either arm.

And with nothing on your mind but to watch re-runs of Little House on the Prairie.

There was little doing in most workplaces for most of last week and less demand for what was produced inmost places.

Just one member of the Leinster Leader newsroom staff turned in to the building at the weekend. He says he knows now how Kevin Costner’s character felt in Dances with Wolves .

You’ll remember him as the soldier who volunteered for duty at the most remote and most dangerous outpost in the days of the Wild West — with the expectation that reinforcements in the form of his colleagues would arrive. But they never did. Over 17 inches of snow were dumped on the Naas area last week and a visit to Kill, Johnstown, Caragh and Sallins, to name some confirmed this. Most businesses in Naas closed as the weather worsened. Among the first to shut up shop were the three main banks on South Main Street — AIB, Bank of Ireland and the Ulster Bank.

Given that, in general, they’d rather you didn’t come in at the best of times and that their staff are overworked because their managers think that technology can solve every problem; it wasn’t the biggest loss. Kildare County Council managed the deteriorating conditions as best it possibly could, bearing in mind that this county was hit hard, with help from various agencies .

But at the very height of the crisis — and this was a life threatening crisis — it resembled a miler in a 100 metre race.

The task KCC faced was truly monumental and we should be grateful.

If any good comes from this crisis it is a reaffirmation of the generosity of the human spirit. That’s a hoary old cliche to be sure.

Nevertheless it was there to be seen all around us .

And it came from some people who, unlike others deployed during this emergency, are not the best rewarded in financial terms.

The bookie offices, the great aficionados of public service which are generally open at least 12 hours a day, tried to maintain a service. Seriously though , my colleague Niamh O’Donoghue’s story of the nurses who stayed overnight in a Naas hotel and then made their way through the icy conditions to turn up at Naas Hospital to do their shift was remarkable. The picture of them walking to work, which accompanied the piece, was almost apocalyptic.

Residents in Monread suffered no less than the rest and it’s a highly populated area.

The Costcutters store on Monread Avenue is essentially a two man show run by Gary and Shiv and the proprietor stayed open for as long as he could and many people were grateful that he did. The same applies to Super Valu at Fairgreen, Naas, where the staff worked in testing conditions to ensure that people had essential food items for as long as possible.

Some taxi drivers braved the conditions for as long as they could.

There were others , too many to mention, working in minimum wage jobs and some in public service jobs, who also volunteered, whose spirit was life affirming.