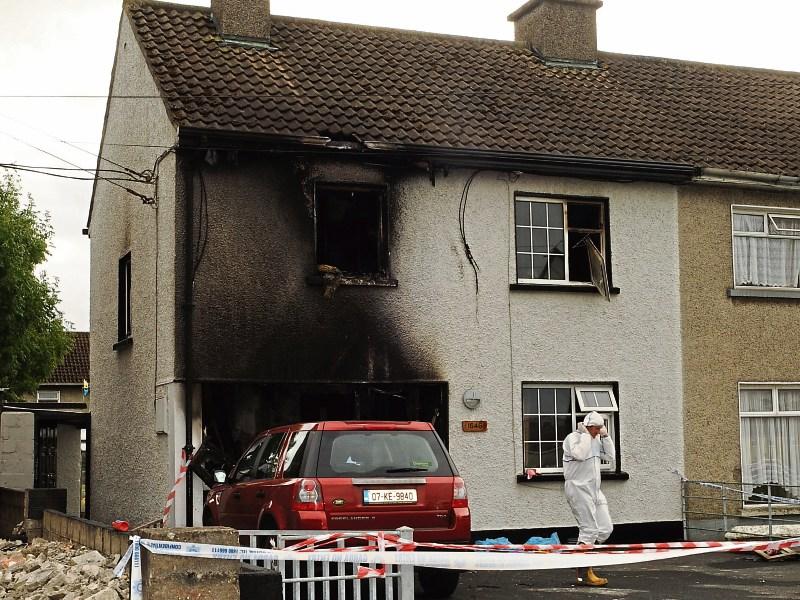 The scene in1646 Pairc Mhuire, Newbridge after the fire.

Gardai are hoping that the passage of time will help to “prick the conscience” of somebody who knows something about a fire which lead to the death of Newbridge man Michael Crowe eight years ago this week, in October 2009. Inspector Mel Smyth told the Leinster Leader he believed that over time relationships might have changed and somebody who knew something might come forward with vital information.

Mr Crowe, then 81 years of age lived at 1646 Pairc Mhuire, Newbridge with his wife Betty, who has since died, and their son Thomas Crowe. The couple had another son, Sean, who did not live that address.

In the early hours of October 4, 2009, at approximately 2.15am a brick was thrown through the front porch window of the house. The Gardai were called, details were given and the household returned to bed once the Gardai had left.

At 6am Thomas Crowe was woken by a loud bang downstairs and quickly realised that the hallway and bottom of the stairs were on fire. He immediately went to the assistance of his parents.

With the help of neighbours, in particular Robert Whyte, Trevor pearse and Martin Meade, they were able to get Betty Crowe out of the house through the top floor front bedroom window using a ladder. Thomas Crowe then fell out of the same window due to the intensity of the flames, falling into the grasp of his neighbour.

Unfortunately Michael Crowe was unable to escape from the fire and died as a result. As a result, Gardai immediately started a murder investigation, during which they have taken nearly 700 statements, carried out hundreds of separate lines of inquiry and followed up on all and any information garnered.

In a statement released today, they emphasise that “this is a live and ongoing investigation and is subject to ongoing review”.

“Today we are again seeking the assistance from any member of the Public who may have any information which may assist in bringing the perpetrator(s) of this heinous crime to justice. We would appeal in particular to anyone who may have been in or around Pairc Mhuire estate on the early morning of Sunday, October 4, 2009 between 2am or 6am to contact us, if they have not done so already.

All information will be treated with the utmost confidentiality and we urge anyone who has any information, even if they believe it to be insignificant or trivial, to get in contact with us at Newbridge Garda Station on 045-440180 or on the Garda Confidential line @1800 666111 or Crimestoppers at 1800 250025.