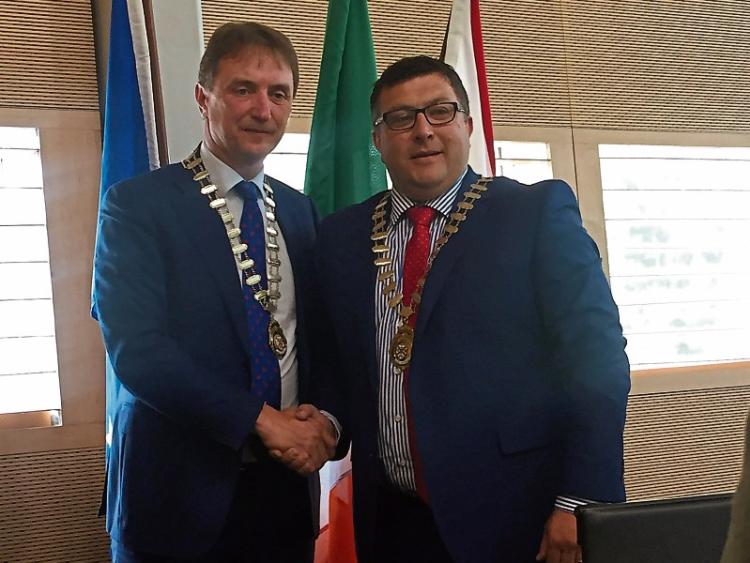 Fianna Fáil Councillor Martin Miley has taken over from Fine Gael’s Ivan Keatley as the new Mayor of Kildare.

At the annual meeting of the County Council today (June 30) Cllr Miley was elected as the new Mayor for the coming term 2017/2018.

Cllr Keatley said: “We solidered together for many years in red and yellow in our local GAA St. Laurences. You will make an excellent Mayor”.

A majority vote throughout the rest of the Council was then given through a show of hands.

Mayor Miley, of the Athy Municipal District, became very emotional at the handing over of the Mayoral chain.

He was first elected in 2004, said it is a “great honour and pleasure” to be given the title of Mayor.

Both his grandfather Billy, elected in 1950, and father Martin, elected in 1974, served in Kildare County Council, and he joked saying: “I suppose it took us 60 years to get here so!”.

Mayor Miley thanked Cllr Keatley for being Mayor for the last year and said he hopes to “serve with distinction and pride”.

He spoke of the challengs ahead with regards emigration, population, infrastructure, public transport, employment and homelessness.

“This county is extremely prouid, it is time to put our energy into this county. Ladies and gentlemen, members of the County Council; I am ready to serve you”, said Mayor Miley.

“It’’ll be a pleasure to work under you. I know your load will be heavy and my load will be light!”, laughed Cllr Fitzpatrick.

Tributes were paid by Members of the Council to Ivan Keatley and Deputy Mayor Billy Hillis for their work over the last year.

He was described by Cllr Sean Power as being “very fair and served the county well”. Cllr Mark Stafford said Cllr Keatley “served as a great ambassador for our county, and carried it out diligently and with humour”.

Cllr Keatley gave a number of highlights of his year as Mayor, including the 1916 commemorations, welcoming home the All-Ireland winning Lilywhite ladies, the County Development Plan, and the Tidy Towns to name a few.

“I have no doubt our members of staff are standing up for our county. I’d like to think over the last three years we’ve become more effective as a council. No doubt you as members will continue for the next two years”.

Cllr Keatley thanked his family and in particular wife Elainea. “Thanks for baring me over the year. I wouldn’t have been able to do it without her support”.

Cllr Keatley was given a photo album and new notebook as a momentum to his time as Mayor.