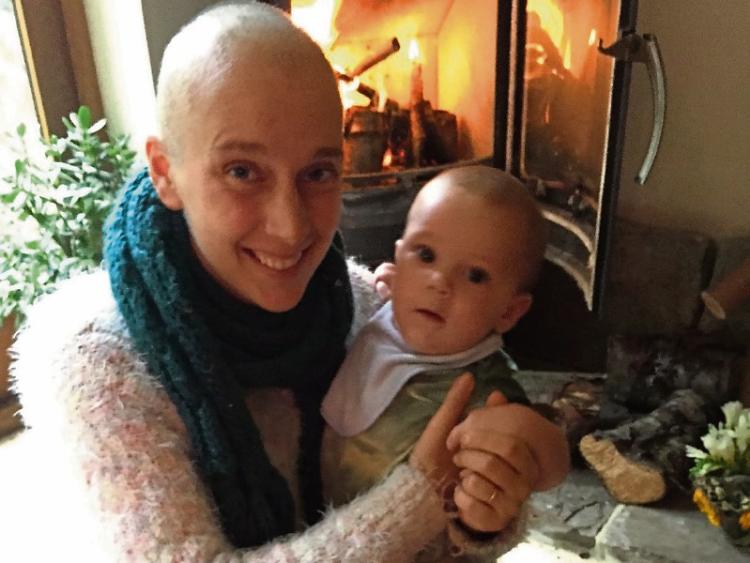 Colette Nolan and her son Zebedee

The loving sister of a 33-year-old Newbridge mum, who has been diagnosed with a serious form of cancer, has launched a fundraising campaign to help her fight the disease.

Colette Nolan, who is from Newbridge but living in Bristol, was diagnosed last July with triple negative rapid inflammatory breast cancer.

Her sister, Yvonne (née Nolan) Carey and a group of friends, Jenny Marsh, Angela, Hilda and Carol Whelan have organised a special night in Johnson’s pub in Newbridge on Friday, November 18 to raise funds for Colette’s treatment. Hilda’s sister, Elaine Price, who has had breast cancer herself, will also be taking part in the Shave or Dye event.

“Colette is just amazing. She is just so positive, but it’s been so tough for her,” said Yvonne.

“She has a six month-old baby boy, Zebedee, and she has been receiving chemotherapy. It’s been such a shock.”

The fundraising night starts at 8.30pm. There will be a DJ, performances from Tina Turner and Elvis Presley impersonators and a raffle with over 40 spot prizes. The team of brave volunteers for the Shave or Dye challenge will be under the care of Fiona and Sharon Hayden from Designer Hair Salon.

Clairvoyant Tara Wickham will also be present for readings.

“People have just been amazing. You really get to know who your friends are when something like this happens,” added Yvonne.

Colette and Yvonne come from a well known local Newbridge family. This is the second time for tragedy to strike with the girls losing their sister Darina White in a tragic accident 20 years ago.

This latest nightmare began when Colette discovered she had a cyst while living in Spain. Yvonne explained she had it checked out and was told it was benign. However, doctors became concerned when it started to grow during her subsequent pregnancy.

She returned to England and was diagnosed with breast cancer on July 26. On August 19, a follow up scan revealed the cancer had spread to her lungs, liver, spine and lymph nodes. Since then, Colette has been undergoing chemotherapy and a scan in October revealed it was having some impact.

Colette is also pursuing holistic treatment and feels this is making a huge difference. Any funds raised will finance this treatment and help Colette fight the battle of her life, supported by her partner Tim.

People can support this worthy cause by attending the fundraising night or by logging on to https://mydonate.bt.com/fundraisers/colettejoannolan. For further information call Yvonne on 085 1242371.