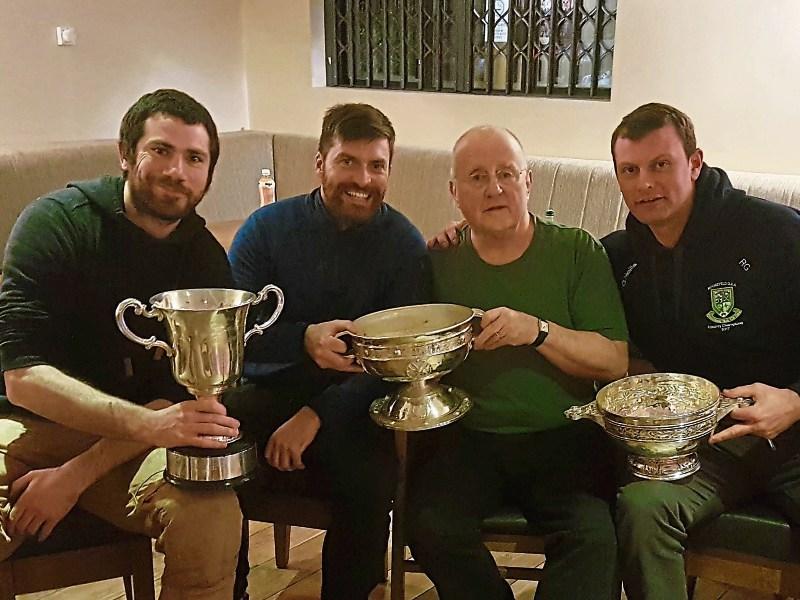 He won a senior football championship medal, at the age of 17; the following year he captained The Moores to a minor football title while ten years later he led Moorefield to  senior honours.

Ross Glavin is one of the most decorated players to have donned the green of Moorefield, winning minor, U21 and senior titles; representing his county at the same three grades; winning a Leinster U21  while, of course, winning a Leinster Club, along with his many other club accolades.

When asked in 2013 what is his  favourite position, ironically he replied 'manager'.

So, now at just 33 years of age and in his  first season as manager of Moorefield he has guided his club to sweeping the boards in Kildare; adding the Leinster title and now facing into an All Ireland semi final, along with his trusted lieutenants Frank Hanniffy and Kevin O'Neill.

So how are things going?

“Preparations are going well; it's been a long haul since the Leinster final; followed by Christmas and then back into it; lads arrive back at the start of January full of enthusiasm and then within a few weeks you are nearly half way there.

Is it very difficult to keep lads happy, fully tuned in such is the big gap between games?

“It is tough  have no doubt about that, but, on the other hand this is a game that the winners head to an All Ireland final on St Patrick's Day,  so this is huge, All Ireland semi finals don't come around too often and All Ireland finals are even scarcer, so while it is drawn out there is a big, big prize at the end of the day.

“I suppose the big task is to keep players fresh; keep them hungry; it's more than just keeping them ticking  over; it's about getting them to peak at the right team; on the right day but we have a brilliant group, each and everyone of them; a great bunch of lads and they really all put it in, night after night and game after game.”

You have played a fair few friendlies since the turn of the year, how have they gone?

“You must remember we have a very big panel of players and a lot of them would have gotten very little football during the local championship and the Leinster campaign, possibly just 19 or 20 players so we have another 12 players or so on the panel they are training equally as hard as the lads who are getting regular football but, yes, we have had a lot of friendly games since January so these lads have got a lot of football over the last six or seven weeks and they (panel members)  are now really pushing the lads that have been ahead of them up to now“ quickly adding but that is  vital.

“It is vital that lads that start realise that there is no shortage of players behind them, ready, willing and more than capable of coming in if and when they get their chance so that, naturally enough keeps the starting lads very much on their toes which is very positive.”

And do you know much about the opposition, Connacht champions, Corofin?

“You talk about the Super 8s at inter-county level but from a club perspective Corofin are one of those Super Clubs; they are one of the big clubs in the entire country and that is why they will be going in as huge favourites against us.

“Go back to the Leinster final and sixty minutes on the clock and that game was dead and buried and we were not going to be in the situation we now find ourselves but you are talking here about season campaigners; they (Corofin) know how to win; they do whatever it takes to win; they are a really hard working side; score goals and we will have to be at our very best on the day if we are to get over them; they are a team that have earned huge respect throughout the entire country.”

You have a few lads abroad with the Defence Forces, any chance they might be back for the semi final?

“Adam Tyrrell will be home on leave  which coincides with the semi final; home about two weeks before it in fact while Ryan Houlihan has been home earlier and has returned to the Lebanon at this stage.

“Ye, Tyrrell will be around, we'll have a look at him and if he gives us everything (and more) in training over the weeks prior to the big game, you never know but remember the Leinster final was just three days before he was due to depart to the Lebanon; he's a good lad and if he can get back in and add to the group well that would be another positive.”

So as the countdown gathers momentum what is the plan in the run up the semi final?

“Some might say we got a bit of luck; a little bit of fortune went our way in the Leinster final; but  over the sixty minutes  if I was to be a little bit critical I felt the opposition out-worked us at times; throughout our whole season both individually and collectively we out-worked the opposition and in many respects we let ourselves down in that regard.

“Many will be writing Moorefield off but that is no different than any game we have played this year; the only game we went in as favourites in the entire season was against Rathnew so we feel we are still only earning respect but if we put in a big, big performance and play to the height of our powers, outwork the opposition on the 17 of February,  have no doubt we are going to be in an All Ireland final.”

Throw-in on Saturday in O'Connor Park, Tullamore is at 2 pm.