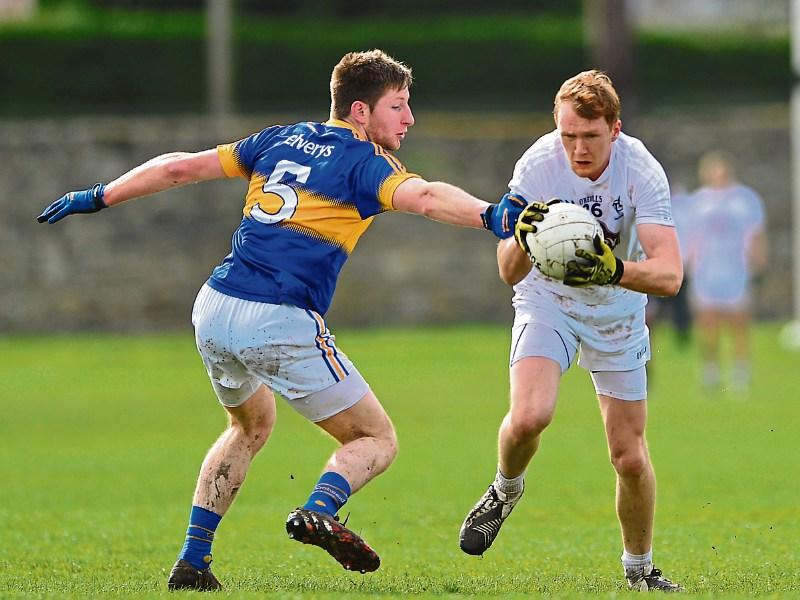 Paul Cribbin gets past Jimmy Feehan of Tipperary in the AFL Div2 fixture at Clonmel on Saturday, March 26

The no. 1 objective has been achieved as The Lilies gain promotion from the hell hole that is Division 3 of the
Allianz Football League.

And good riddance to it, that's all I can say.

And what is so distasteful with Division 3 football I hear you say?

I will sum it up in just one word.

No disrespect to Tipperary and its people but playing an Allianz Football League, of any division mind you, in what is named on the programme, as Clonmel GAA Field, is nothing short of an absolute disgrace.

Kildare have been messed around by Tipperary and the GAA in general over this fixture. Originally fixed for the Holy Grail of Semple Stadium it was quickly displaced out of there to Tipperary town.

Last week this writer was informed by a Tipperary source “don't mind what you hear; don't mind what fixture Croke Park put out at the start of the week, the game will be played in Clonmel,” and so it was.

Not too long ago Kildare were told St Conleth's Park was not fit for purpose and county games would not be fixed until remedial work was carried out. Work such as proper (health and safety) barriers were installed along with work on toilets, etc.

The only barrier in the Clonmel GAA Field on Saturday was the man collecting the tickets on the way in (and even he missed a fair few fans as they simply walked past).

As for press facilities?

The PA system did not work because there is no PA system in place.

To get to the 'stand' fans had to cross a muck path before attempting to climb up a grass bank.

Back in 1976 Kildare played Kerry in the U21 All Ireland final in Clonmel GAA Field.

Looking around just two things have changed in 40 years: A new shed (referred in some quarters as a stand) has been erected while the most modern convenience visible was an electronic score board.

There were few complaints back in 1976 as one of the greatest teams ever to come out of Kerry walloped Kildare 0-14 to 1-3 as Mick O'Dwyer was about to embark on an incredible run of victories, not only at U21 level but at senior level.

But that was 40 years ago and what was acceptable then is not acceptable these days. To bring travelling fans to such a ground is downright deplorable. It is time Kildare Co Board made a stand, but it would seem that when it comes to Kildare fans, anything goes.

The U21 final on Saturday next was fixed for O'Moore Park on Wednesday night but we are now told that due to “remedial work” it is now not available but you can bet your bottom dollar it will be available come Sunday when Laois host Meath in the final round of Division 2 of the Allianz Football League.

Kildare's opening championship game against Wexford has been brought forward eight days and on a Saturday at that, due to a concert being staged at Croker.

Were Kildare asked if they had any objection?

The Co Board may have been but certainly the Co Management team were not.

And why is that game not being played outside of Croke Park?

Because Dublin hurlers are due to play on the same bill that's why, yet there will hardly be 20,000 at those
games in eight weeks time.

Did Kildare kick up?

Did Kildare kick up over the U21 final being switched from Portlaoise to Pairc Tailteann on Saturday?

Did Kildare kick up when informed that their championship opener against Wexford was being brought forward to a Saturday at 5?

Have Kildare any clout at Leinster Council?

Not that we aware of.

It is known for many a year now that Kildare have no power, or influence, in Croke Park but it is time we called a halt. Time we stood up and our voices were heard, let it be at Leinster Council or Croke Park.

There seems to be a nice cosy consensus operating in both these bodies and certainly from a Kildare point of view, there seems to be little willingness to rock the boat.

On Saturday last Kildare overcame all the obstacles that were placed before them and while no doubt the official line will be that where a county fixes a league game is entirely up to the host county, but treating patrons like this, many of whom
travelled a near 200 miles round trip, is simply not good enough.

It's time to cry halt.