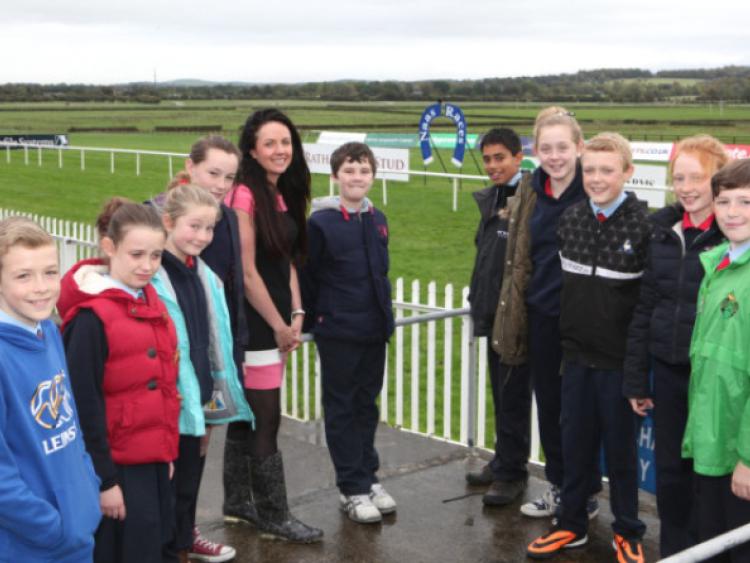 School pupils got a taste of the world of horseracing at Naas Racecourse as part of an initiative to build ties with the community.

School pupils got a taste of the world of horseracing at Naas Racecourse as part of an initiative to build ties with the community.

Horse trainers Richard Pugh and Denis Cullen met the children and jockeys Gary Carroll and Jody McGarvey were also on hand to give them a taste of what life is like in the demanding world of race riding.

Almost 300 children 5th and 6th class pupils took part in demonstrations and listened to talks while racecourse manager Tom Ryan told them about how the track staff prepare for a race meeting.

According to Lorraine Page of Horse Racing Ireland the project also aims to generate an interest in the sport and, hopefully, produce future racegoers.

“The activities educate school children about racing and show them what happens behind the scenes at the racecourse,” she said.

They learned about how a trainer works to get a horse ready for a race, what a horse eats, who much exercise it must get and they were talked through the anatomy of a horse and shown how to “tack up”. They met the jockeys in the weigh room where they asked questions about what it takes to be a jockey.

Some of the pupils had a try on a racing simulator which is used at the Racing Academy and Centre of Education in Kildare town to replicate the feeling of riding a horse.

And they were shown how to ride a racehorse.

Manager Tom Ryan said the children were enthusiastic and interested in all they were shown.

He added that horseracing is a vital part of the local economy and efforts are being made to encourage families to come racing.