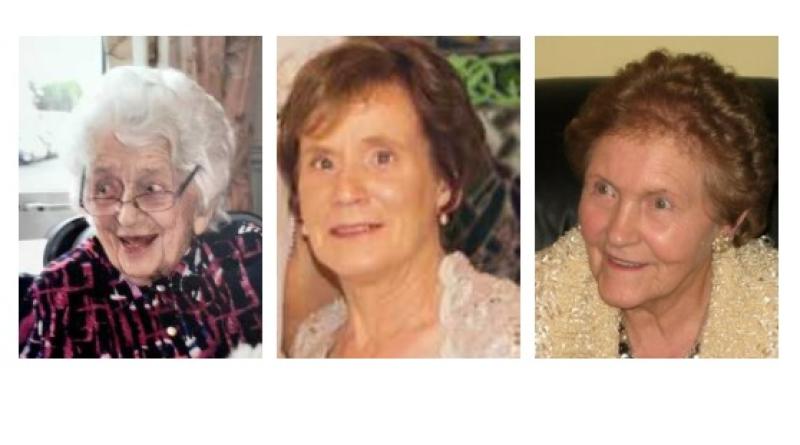 The death has occurred of Josephine (Jo) RYALL (née Curran), The Priory, Newbridge and late of Brownstown, The Curragh and Annascaul, Co. Kerry. She passed away peacefully on January 6 in the presence of her loving family and under the wonderful care of the nurses and staff of Willowbrook Nursing Home. Dearly beloved wife of the late Brendan and treasured mother of Sheila, Dermot, John and Maria. Sadly missed and lovingly remembered by her children, sons-in-law Brendan, Seán and Ric, daughter-in-law Mairéad, beloved grandchildren Louise, Elaine, Aoife, Eoin, Shane, Seán, Orlaith, Laura and Cliodhna, great-grandchildren, sister-in-law Kathleen, nieces, nephews and dear friends.

Ar dhéis De go raibh a anam dílís. Removal from Anderson & Leahy Funeral home, Newbridge on Monday morning at 10.30am to arrive at St Conleth’s parish church for 11am. Funeral afterwards to St. Conleth’s Cemetery, Newbridge. Mass will be live-streamed on the Newbridge Parish website.

May he Rest in Peace. Funeral Mass on Saturday at 10 o’clock in Church of the Precious Blood, Cabra (Masks must be worn and social distances guidelines should be followed ) followed by cremation to Glasnevin Crematorium. For those who cannot attend the funeral Mass it can be viewed by clicking on the following link https://www.churchservices.tv/cabrawest and the cremation service can be viewed at 12 o’clock by clicking on this link https://www.mcnmedia.tv/Camera/glasnevin-cemetery

May Mary Rest in Peace. Reposing at her family home on Friday with Rosary at 7pm. Removal by Glennons Funeral Directors on Saturday to arrive at St. Brigid's Church, The Curragh, for Requiem Mass at 12 o'clock. Burial afterwards in St. Conleths Cemetery, Newbridge. Mary's Funeral Mass will be live streamed on the St. Brigid's Church, The Curragh, Facebook page. Please observe current HSE and government guidelines at all times.

May Jim Rest In Peace. Reposing in his funeral home at Mill Road, Castledermot on Friday and Saturday from 12 noon until 10pm (for family and close friends). Removal on Sunday morning at 11:50am to the Church of the Assumption Castledermot for Requiem Mass at 12.30pm followed by burial in Coltstown Cemetery.

Mass will be live streamed on https://www.churchservices.tv/Castledermot

The death has occurred of Carmel Kavanagh, late of St. Conleth's Terrace, Naas Rd., Newbridge, Newbridge. Carmel passed way peacefully on January 5 in the wonderful care of the nurses and staff of Craddock House nursing home, Naas, predeceased by her brother (Bunny) & sister-in-law Kathleen. Sadly missed by her loving niece Fran & her husband Jim, her nephew Sean, and all her grand nieces & nephews & her great grand nieces & nephews of the Kavanagh & Clarke families, all her extended family, relatives & friends.

May Carmel Rest In Peace. Reposing at Anderson & Leahy funeral home on Friday from 4pm with prayers at 7pm. Removal on Sat morning at 10.30am to arrive at St. Conleth’s Parish church for 11am. Burial afterwards to St. Conleth’s Cemetery, Newbridge.

The death has occurred of Msgr. Daniel B Logan, Killina, Carbury. Monsignor Daniel B Logan, Jacksonville, Florida, and late of Killina,Carbury, Co. Kildare. Predeceased by his parents Peter and Ellen. Msgr. Dan is sadly missed by the Bishop and Priests of the Diocese of Saint Augustine, his brothers Tom (& Sally) and Jay (& Bridie), nephews, nieces, grandnephews, grandnieces, cousins, and a wide circle of friends in Ireland and Florida.

May Msgr. Dan Rest In Peace. No flowers please. Masses may be offered for the repose of his soul.

Msgr Dan’s Vigil will be held on Wednesday, 12th January, in the Immaculate Conception Church in Allenwood, County Kildare(W91N265). He will repose in the church from 5pm with Prayers of Commendation and the Rosary concluding at 7pm.

Prayers will be said in Allenwood Church at 12.45pm on Thursday, 13th January, after which Msgr Dan will travel to the Holy Trinity Catholic Church in Derrinturn, Co. Kildare (W91XN35) for his Funeral Mass, which will take place at 1.30pm. Following mass, his burial will take place in the adjoining cemetery.

His Funeral Mass will be live streamed on www.Carburyparish.ie.