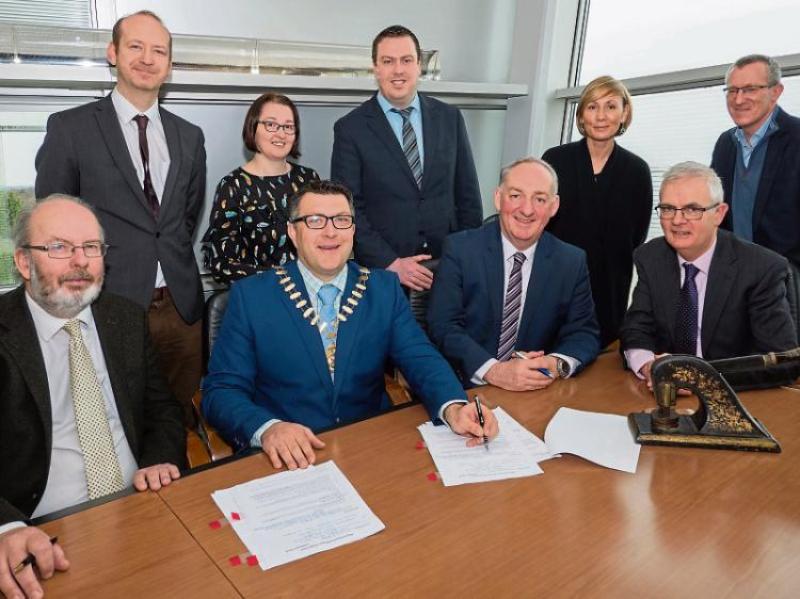 Builders at a social housing development in Kildare town have reached a stale mate with Kildare County Council after their efforts to remove scaffolding from the site this morning were halted by the council.

JRS Scaffolding was subcontracted to build 32 houses at Dunmurray Rise in Bishopsland, Kildare town, but have cited fears that they won’t get paid for their work as the reason behind removing their equipment from the site.

Owner Alan Sherlock told the Leader that KCC let them take down some of the 32 scaffolds this morning but by the afternoon that had all changed.

“We are owed money,” said Alan. “They (KCC) let us take our equipment down this morning and that changed in the afternoon. They haven’t given us a reason other than it is their site and they are not letting us take anything off their site.”

Kildare County Council and MDY Construction of Staplestown, Naas signed a contract for the construction of the new homes in Dunmurray on March 9 last and MDY subcontracted the work to JRS.

“We are a new company. We have four trailers all ready to be loaded tomorrow morning at 8am but the security on the site is going to stop us from doing so. I don’t know what is going to happen – we are going to be there at 8am trying to get our stock back – maybe the gardai will have to be called.”

Kildare County Council in response said "the council has taken measures to secure and control the site and is dealing with contractual matters in relation to the site."