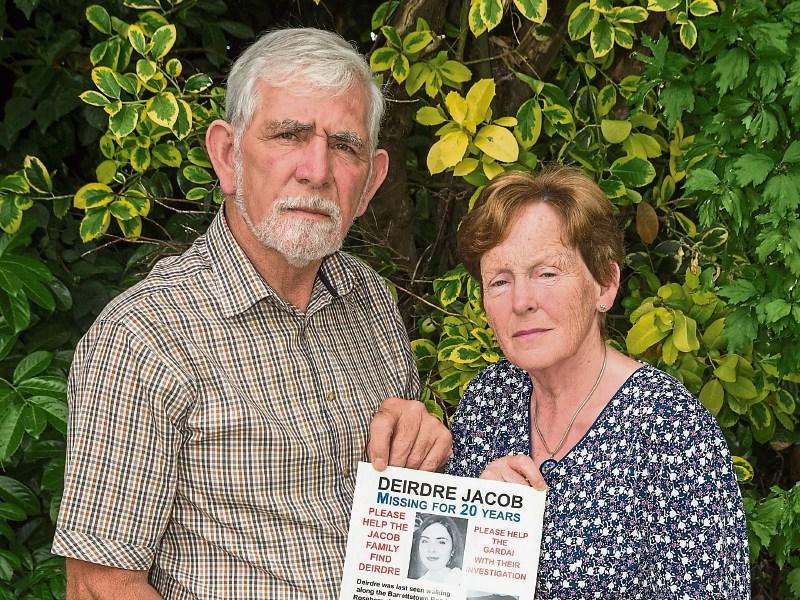 The parents of missing Newbridge woman Deirdre Jacob, who disappeared from outside the family home in Roseberry almost 20 years ago, are positive the answer to what happened to their daughter is still out there. Next Saturday, July 28, marks two decades since the young Newbridge student teacher vanished.

“We are 100% positive that one or two people know more about what happened to Deirdre and it is to those people we are appealing,” said her father Michael Jacob, speaking ahead of the 20th anniversary of the date he last saw his 18-year-old daughter.

“We’re as wise today as the first day Deirdre went missing. That’s very tough. We’re in a situation where we’re desperate and the gardai are desperate for the piece of extra information and we know that it is out there — someone heard something or they overheard something.

“That person or persons with information, we’re imploring them to please come forward. There is someone out there to tell us something more.”

Deirdre’s mum Bernie said that even if someone is not certain as to the value of their information, it would be best to come forward.

“Even if somebody is unsure but if they have any suspicions about anything, come forward because you never know,” she said.

“It may be someone who heard something in the aftermath, or other comments over the years. Even the smallest thing that somebody heard, it might tie in — just a conversation that sounded out of the ordinary, or someone may have noticed something about someone’s mannerisms at the time but they were never in a position to talk about it.

“Now with the passing of the years, whether they are a more mature person or maybe their conscience is looking at them in a different light, this would be a very, very good time to let it be known.” 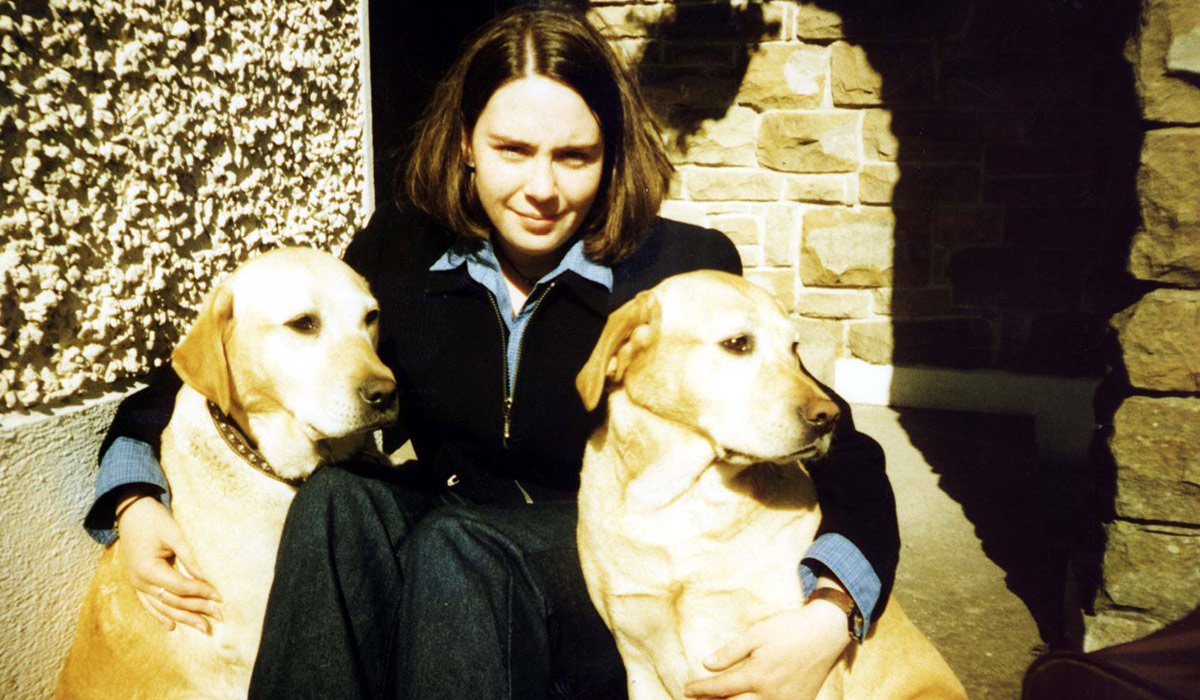 Newbridge woman Deirdre Jacob, pictured with her two labrador dogs before her disappearance

The Jacobs are appealing for even the smallest bit of information about their daughter’s disappearance that might be the last piece of the puzzle in what happened to their teenage daughter.

On the afternoon of Tuesday, July 28, 1998, the 18-year-old walked home from Newbridge town — where she had been at the AIB Bank and the post office, as well as visiting her grandmother — a trip which takes about 25 minutes.

Shortly after 3pm, she walked along the Barrettstown Road in Roseberry, and was seen at the gates of the family home.

She was carrying a CAT black canvas bag. She has not been seen since.

“We want a big break and it could be something very very small,” said Michael.

“And it may well be playing on that person’s mind. We believe that there is a person or persons out there who want to get it off their chest but are hesitant about it.

“They may not realise that it has been 20 years and it might make them think ‘I’m going to tell that. I’m going to bring forward that piece of information’.

“The gardai will make that assurance that whoever comes forward will be treated very sensitively, and even there are other ways too of letting that information be known. It is important for people to understand and know that.”

The Jacobs describe the 20 years since Deirdre has been gone as being both long and short. Her absence is felt every day by the family, but perhaps more so at family occasions, both happy and sad, where Deirdre should be present but isn’t.

“It’s been a long and short 20 years since Deirdre went missing. When you think of all the various attempts we’ve made to get information and at the same time you just look back and think it was just the other day,” said Michael.

“Every day is the same. It’s no different. It’s the same situation and there is no change in it,” added Bernie.

They recall a happy outgoing teenager, who was very close with her family (the Jacobs have one younger daughter) and friends, and one who, in a time before mobile phones, still liked to write letters.

The former Holy Family pupil was a bright student, studying primary school teaching at St Mary’s College in London. Having come home for the summer after her first year in the UK, she was due to return to her studies that September.

“Deirdre would be 38 now. She was very outgoing, and liked to stay in contact with her friends. They were very important to her. She was a very good friend and she had very good friends, particularly from school and college,” said Bernie.

“Deirdre at that time loved writing letters. Even the night before she went missing, I went in to say good night and she was sitting up in bed writing a letter. That’s the way it was, even when she was in St Mary’s College at Strawberry Hill in Twickenham in London, we wrote to each other all the time.

“The night before she went missing, she was writing a letter to one of the girls from college who she was going to share a house with in London. She had to send over a bank draft for the house share, and that is why she went to the bank that day and later to the post office.

“We went over and met with all her friends after she went missing and we went to the house that she would have been in — it seems long ago now.

“And that is why immediately I thought it was strange when I got home that day and the double lock was still on the door, and I knew straight away Deirdre wasn’t there.

Deirdre Jacob was a student teacher in Twickenham, London

Their lives constantly revolve around the day Deirdre disappeared.

“The fact that Deirdre is 20 years missing is no different from when she was five years or 10 years or one year — nothing has changed for us.” said Michael.

“You live with it because you have no choice. No day is different from the previous or the next in the situation we’re in. Deirdre is missing, day in, day out. You’re all the time thinking what can you do, particularly at this time of 20 years missing. We have to bring it to the public’s attention because at the end of the day you are depending on the public to help find her,” added Bernie.

Thoughts of Deirdre and what happened to her are never far from their minds.

“I remember, in the past moreso, you would when you see somebody with her hair or figure you’d take several glances, thinking it might be her,” said Michael.

“Thinking about that last day and the amount of times when you are driving in or out the gate you are conscious of it. You wonder what happened next. Even though the whole area has changed completely since then — it was all hedges then, now there are more houses — Deirdre is the constant.

“When you look at a photo of a family occasion, you subconsciously see a gap where Deirdre should be standing. It’s hard.

“Mobile phones were only hitting the street back then, Deirdre didn’t have one. We only got one after Deirdre went missing. That’s how much technology has changed. Even with Facebook now, nothing is local anymore it’s world wide.”

They haven’t looked for Deirdre on Facebook and say they have no idea where, if anywhere she could have gone, except that she fitted into her college life very well in London, but she was very much a creature of habit and one who always kept in contact.

“We had two dogs, labradors when she went missing. Juno and Misty both have passed on long since and we now have a Jack Russell and you wonder what would she make of this? She chose Juno when she was a pup — a big easygoing labrador and very different from a Jack Russell. There is that photograph of her taken with the dogs not long before she went missing.

“We don’t know what information is going to make the difference but what we do know is that in the aftermath of Deirdre going missing, and ever since, there is a huge volume of information there.

“It may be a very small amount, even insignificant to somebody, that might tie the lot together and create a new dimension and it may be as simple as that.

“Half a dozen words might just do it, or DNA. But it’s hard to know until something comes up but it has proved very relevant in other cases. They are now able to reach conclusions far quicker than 20 years ago.”

Deirdre’s disappearance remains unsolved and open as a cold case. While there have been many false leads over the years, including speculative links of Deirdre’s disappearance to the activity of known offenders, including convicted rapist Larry Murphy, there is no concrete proof that they were involved. As a result, her family believe that it is important not to distract from the search for Deirdre with such speculations. A nationwide appeal will be held on Friday.