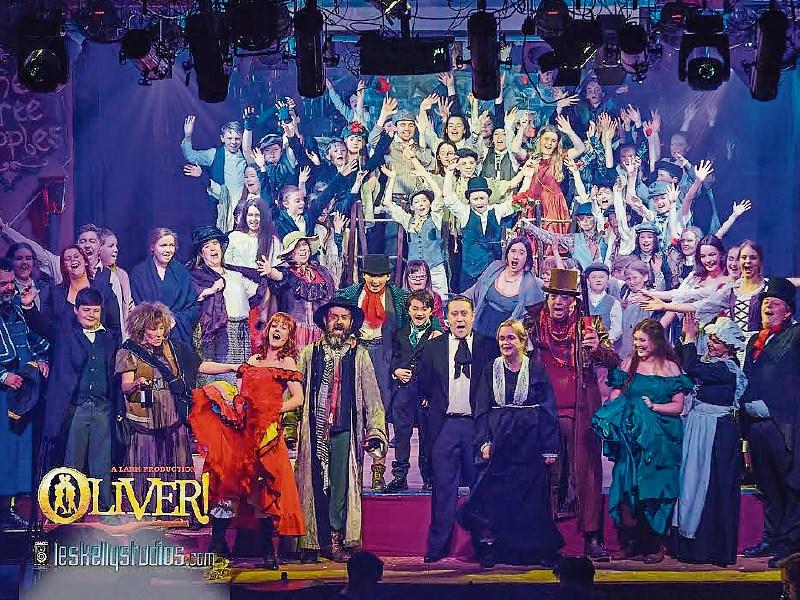 The cast on stage at opening night Pic Les Kelly

LARK’s long awaited production of Oliver! took to the stage last night in what has been hailed as a great success.

The production, which opened last night (Tuesday) will play at Kildare town’s CWMS hall nightly at 7.30pm until April 1 next. It hits the stage after months and months of hard work and over 20 hours of local filming, which will also be shown in the performance.

The cast consists of some incredible talent including Charlie Reid and Ryan Sexton  both playing the lead role of Oliver.

“We had our opening night last night and it was a huge success,” said PRO Kym Kelly.

“Opening night was a sold out event and the cast and crew were delighted to hear this at 7.30pm. The hall has been revamped with black floor to ceiling drapes and a red carpet up the centre of the aisle.

Meanwhile some quotes from people leaving the show last night included "stunning performances" and "very stong cast"  as well as "the staging was super" and "cast were simply brilliant”.

"Our nine piece orchestra were lead by Katie Conlan and  also sounded amazing. It was such a great night. We are all still on a high."

Tickets are selling fast for the remainder of the shows so be warned.