This is the CCTV gardai released today, Friday, April 7, of a black-clad man seen speaking to missing Trevor Deely, from Naas, shortly before his disappearance in the early hours of December 8, 2000.

The footage was recently digitally enhanced from old VHS tapes, thanks to new technology which has become available in the years since the Kildare man's disappearance in Dublin city shortly after his office party.

The video shows a black-clad man acting suspiciously in the vicinity of Trevor's workplace, Bank of Ireland Asset Management, on Wilton Terrace, Dublin 2, for half an hour before the young Naas man arrived. He had called into the office after his night out to collect an umbrella for the walk home.

The man followed Trevor to the back gates of the bank building, where they can be seen having a conversation. The footage cuts to scenes of Trevor leaving the bank, and then Trevor was last captured on CCTV passing the Bank of Ireland ATM machine on Haddington Road at approximately 4.14pm.

Gardai believe that the dark-clad figure who follows him approximately 30 seconds later is the same man he talked to outside Bank of Ireland earlier in the night.

Meanwhile, Trevor's family and gardai announced this morning that a €100,000 reward is being put up for information leading to his disappearance. 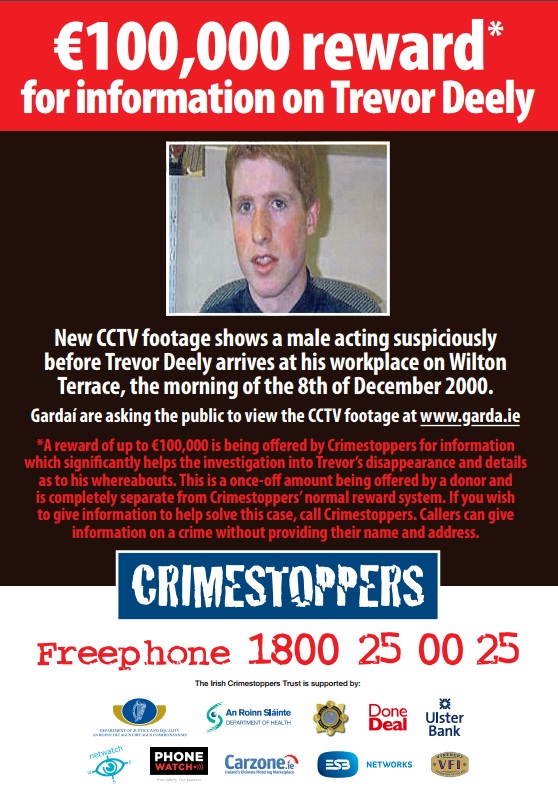