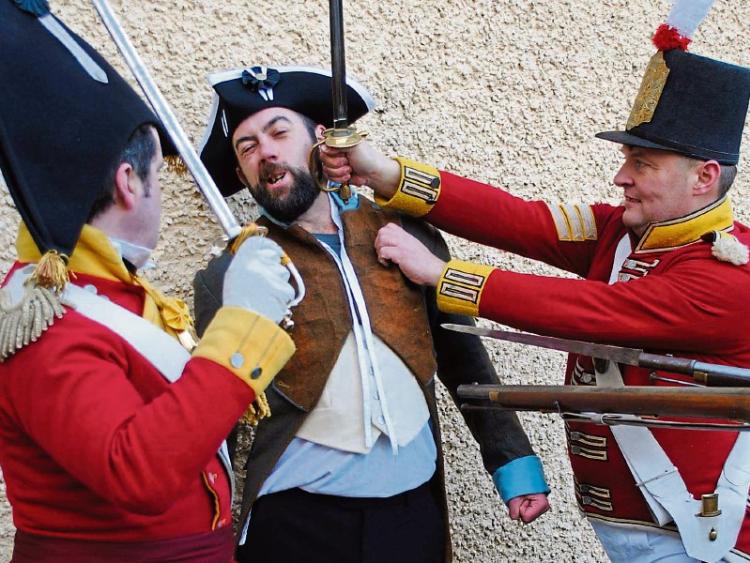 Re-enactors get to grips with the 1798 Battle of Prosperous, and each other, in preparation for the Heritage Festival on May 25 - 27

The organising committee of Prosperous Heritage Festival has finalised and released details of the festival weekend.

And it promises to be an event that brings the history of village’s involvement in the 1798 rebellion very much to life.

The Festival will take place over the course of Friday to Sunday, May 25, 26 and 27.

On both the Friday and Saturday, there will be a show at the Drama Hall starting at 8pm which will involve a history talk by acknowledged expert Mario Corrigan.

The local drama society will act out particular scenes from the lead up to the battle.

“There will also be 20 minutes of 1798 songs, including one called the Battle of Prosperous,” said Darren Brereton.

Mr Brereton said that Battle of Prosperous had no known music to it, but that researchers had come across the words to it and he put it to music.

“We will probably record it in the coming weeks.”

Tickets for the event in the Drama Hall are €5 and they can be bought through the festival’s Facebook page (Prosperous Heritage Festival) or from Mr Brereton on 085 7120720.

On the Saturday after, at 2pm, there will be a talk at Downing’s House including a guided tour of the period building.

That building was the residents of Henry Starmars who was the landlord’s agent at the time, having taken over Robert Brooke, the founder of the village, left. The tour will including the secret escape tunnel and Starmars vault (where he was discovered hiding and murdered), the house’s original basement.

In more recent times, Christy Moore recorded his album, Prosperous, in the house.

Historians Seamus Cullen and Mario Corrigan will give talks there.

More than half are already gone.

They are available from Mr Brereton and from the Facebook page.

The area of the village street down around Larry’s bar and the ICA hall will feature battle re-enactments with groups from all over the country coming to the area.

“The battle will be from 3pm and there will be farmer and craft markets in the area.”

The ICA hall will be a temporary 1798 museum and will have weapons, uniforms, a video slideshow and pike heads on display.

The R406 which goes through Prosperous, from Clane to Allenwood, will be closed to a new hours on the Sunday, and diversions will be in place.

“It’s for all amateur and professional historians or even just for anyone with a passing interest in history or the village. Everyone is very welcome,” said Mr Brereton.

The organisers are locals Joe Murphy, Ciaran Healy, Brian Moran and Darren Brereton and are a subcommittee of Prosperous Community Association.