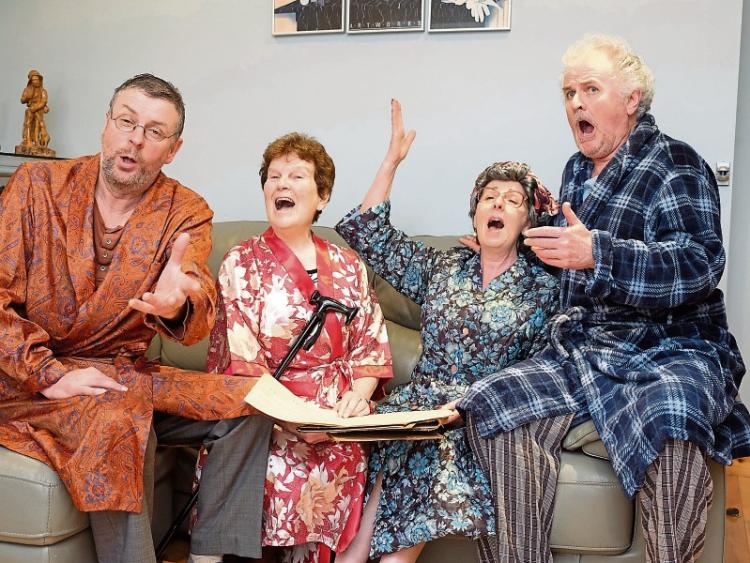 The bodies may be fading but the spirit never dies! That description could well be applied to the four characters in the Moat Club’s forthcoming production of Quartet by Ronald Harwood.

In the retirement home, Wilf (Padraig Broe), Reg (Eugene Delaney) and Cissy (Moll Fullam), who consider themselves ‘the élite’, gather to pass the time and plan for a performance in the birthday gala to mark Verdi’s birthday.

The rumour circling the halls is that the home is soon to play host to a new resident. Word is, it’s a star.

Jean (Cathy Lawler) arrives and old rivalries resurface, secrets are revealed and chaos unfolds, but in true theatrical tradition, the show must go on — and it does for five nights at the Moat Theatre, Naas on Tuesday, February 13, running to Saturday February 17 inclusive at 8pm nightly.

The play was originally inspired by a TV documentary, Tosca’s Kiss, which told the story of Casa di Riposa in Milan, the world’s first nursing home for retired opera singers, founded by composer Giuseppe Verdi in 1896.

Harwood also has his characters celebrate Verdi’s birthday each year on October 10 by giving a concert where, in their minds, they sing as exquisitely as in years gone by.

With the benefit of a little modern technology, Quartet does the same.

The play was made into a film of the same name, released in 2012 and directed by Dustin Hoffman. It starred Maggie Smith, Pauline Collins, Tom Courtenay and Billy Connolly.

Directed by All-Ireland winning director Barbara Sheridan, this production will have you laughing and crying at the same as you enjoy the antics of these four very different characters against a background of wonderful operatic music.

Quartet is a celebration of the twilight years and the hilarity of growing old disgracefully!

There is a special offer of four tickets plus a bottle of wine for €60.

Call the box office on 045 883030 to avail of the offer or book online at www.moattheatre.com