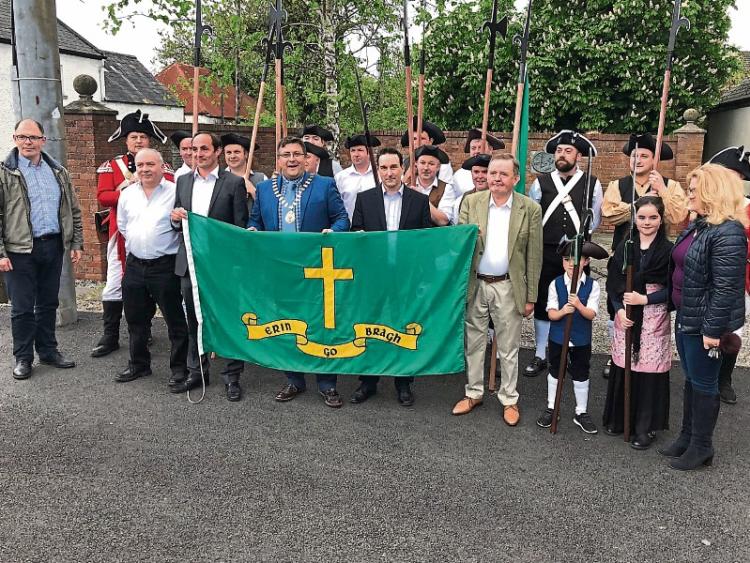 The 1798 Rebellion was commemorated during last year's Prosperous Heritage Festival

This coming weekend will see the 2019 edition of Prosperous Heritage Festival. It follows the huge success of last year’s Festival which commemorated the village’s significance in the 1798 Rebellion.

This year’s theme is the Irish War of Independence and will take place over the weekend of the Friday, Saturday and Sunday, June 28 to 30.

Prosperous may not have had such a significant impact on the War of Independence as it did in the 1798 Rebellion, there was still much activity by the Old I.R.A. in the area during this time of guerilla warfare.

Many local men made up the Kildare’s 4th Battallion, Prosperous G. Company as did volunteers from Timahoe, Donore, Caragh, Kilmeague, Blackwood and Robertstown. They were often involved in weapons raids, post office raids, roadside trenching and the felling of trees to block main roads that British convoys would have used. They were also involved in the ambush at the Hill of Allen and an attack near Hazelhatch, just outside of Celbridge.

The festival will include a night in Prosperous Theatre featuring history talks about the I.R.A. activity that took place in the area by renowned historians James Durney and Mario Corrigan, and will finish with a short musical segment by local musician Darren Brereton who will be singing songs focused on the War of Independence.

A big part of this festival will be centered around the local GAA at the time and the Heritage Group have teamed up with the local club Caragh GFC for the Saturday and Sunday.

On the Saturday June 29, Caragh GFC, will host the first ever under eleven’s “Larry Stanley Cup Tournament”. It will commence at 12pm sharp. The Kildare Decade of Commemorations Committee have kindly sponsored once off unique medals for this very significant tournament.

Larry Stanley was regarded as one of the greatest players of his generation. He won two county club championships with Caragh GFC and won an All-Ireland title with Kildare in 1919 and was captain of the team.

He was also a successful high jumper, and represented Ireland in the Olympics in 1924. Stanley was recognised as one of the greats in Gaelic Football and was the recipient of the inaugural All-Star Award. He was also named in the Kildare team of the millenium. He died in 1987 aged 91.

Caragh GFC themselves have quite a big history in Kildare Gaelic football. They are the only club to have played in five successive county finals - from 1918 to 1923. During the Irish Civil War in 1921, they played in the County Final against St. Conleths of Newbridge.

The match ended in a draw and the replay was suspended due to one of the players, C. McCarthy, giving a false name and was on the run from the Free State Army.

On Sunday June 30 at 2pm in Caragh GFC grounds, the big event of the weekend will take place. A football game to reel back the years where we will see two teams of Prosperous footballers, past and present, do battle in a game dubbed as “Heroes Versus Legends.”

Both teams will feature their own captains, Dominic Campbell on one side and Kevin Gannon on the other. There will be a “very big and loud” re-enactment on the day but that will remain a secret until the day itself!

The gates will be manned by none other than the renowned Lord Edward’s Own Re-Enactment Group from Monasterevin playing the part of the R.I.C. and Black And Tans. There will be re-enactment groups travelling from all over Ireland for this event, such as Enniscorthy, Belfast, Ashbourne, Co. Clare and Co. Kilkenny, just to name a few and word on the street is they will be coming with a lot of firepower… Just in case!!

The day will also feature vintage vehicles from the period, the hall itself will be turned into what is shaping up to be a really interesting museum, there will be balloon modelling and mascots for the kids, a brass band to start the day and lead the teams on to the pitch, a swing band towards the end of the day, a period dress competition with some great prizes, a special half-time show, and much more surprises on the day.

All events over the weekend are free, although those interested in attending Friday night’s event can book tickets by texting 0857120720 or through the Facebook page “ProsperousHeritage Festival” - where further information is available.