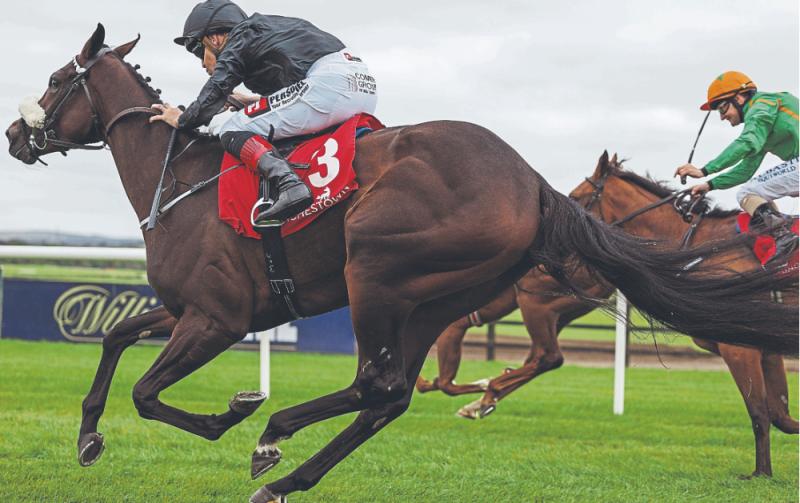 Saturday saw the Commonstown team of Jessica Harrington and Shane Foley record a double at Gowran Park, Maud Gonne Spirit getting things under way in a thrilling finish to the seven-furlong Gowran Park For Golf Race.

Off the track for a year, the consistent five-year-old was produced in excellent condition and found plenty for Foley to score by a neck, with the same distance separating second and third and third and fourth.

It was a typically strong effort by Foley and he was seen to similar effect when getting the improving Paris Peacock to prevail by the same distance again in the Group 3 Denny Cordell Lavarack Lanwades Stud Stakes.

Dundalk
There was a Flat card at Dundalk the same evening and Michael O’Callaghan was on the board again, providing Dylan Browne McMonagle with the first leg of a double. Darkdeserthighway was an easy two-and-a-length victor in Division 1 of the Irishinjuredjockeys.com Handicap.

Downpatrick
It was Luke Dempsey who registered a double at Downpatrick on Friday, getting off to the perfect start as the William Durkan-trained Favorite Moon obliged in the Downpatrick Autumn Maiden Hurdle by eight lengths.

A smart performer on the flat when with William Haggas, Favorite Moon made no mistake on his second run over timber, having also finished sixth in the Connacht Hotel Handicap for qualified riders at Galway, and once Dempsey got him into position two out, the verdict was never in doubt.

The Carbury man clocked up his brace on Krujers Girl for Thomas Coyle in the Remembering Caughoo Handicap Chase. This proved even easier than the opener, as the 10-year-old mare took it up three out in the three-mile contest and stretched effortlessly clear to score by nine lengths.

Keith Donoghue maintained his good run, wearing the colours of his father on the Pat Griffin trained Trishknowsbest in the M B McGrady & Co Accountants Handicap Hurdle.

Ridden confidently in rear, the five-year-old mare was asked to take closer order before the third last and was delivered to challenge up the inner before the last, showing good speed from there to win by three-quarters of a length.

Martin Brassil’s Desertmore House won the feature, the JPC Rated Novice Hurdle with Ricky Doyle in the saddle.
The pair tracked the leaders and despite making a mistake when making a forward move, continued to make ground and found plenty in the closing stages to delivery by two lengths.

Naas
On Thursday, Seamie Heffernan doubled up on home territory at Naas by claiming the €100,000 feature, the Goffs Sportsman’s Challenge.

The Caragh native got the call up from British trainer Tom Dascombe to do the navigation on Felix Natalis and capitalised with a typically well judged ride from the front to score by two lengths in the six-furlong contest.
Heffernan had earlier linked up with breeze-up king Willie Browne to win the Irish Stallion Farms EBF Fillies’ Maiden on Spirit Gal over the same trip and in identical fashion. The juvenile daughter of Invincible Spirit delivered on earlier promise when breaking smartly and making all, prevailing by two lengths.

Jessica Harrington saddled of the Irish Stallion Farms EBF Maiden and Bold Discovery was very impressive in giving Shane Foley a double on the day.

The 15/2 shot was sent to the front once more by Foley and after being left along there early on, was able to build up speed after turning in and gallop to a two-and-a-half length triumph at the end of the seven furlongs.

Earlier, Johnny Murtagh admitted to being surprised as Bay Of Plenty sprinted to a one-and-a-quarter length triumph in the Irish Stallion Farms EBF Maiden for colts and geldings.
The Ben Coen-ridden son of New Bay clearly reserves his best work for race day and he showed an eye-catching turn of foot when finally getting daylight after being switched by his navigator to put the affair to bed very quickly.

Promising debutants
Michael O’Callaghan unleashed two very promising debutants at Punchestown on Tuesday that got off to a perfect start to their careers by recording victories despite showing plenty of greenness and providing the Curragh trainer with a quick double in the opening two contests.

Both were ridden by Leigh Roche, who would go on to record a treble later in the card.
On each occasion, Roche showed his horsemanship and strength, giving the debutants time to get the hang of things before rattling home late on, Gozen snatching the Irish Stallion Farms EBF Fillies’ Maiden over seven furlongs by a short head in the colours of the trainer’s wife Siobhain and Rothko getting up by a head in the seven-furlong Anglesey Lodge Equine Hospital Maiden, this time for Michael O’Callaghan Snr.