Kildare JFC: Kill beat Grangenolvin in extra-time to get to Championship final 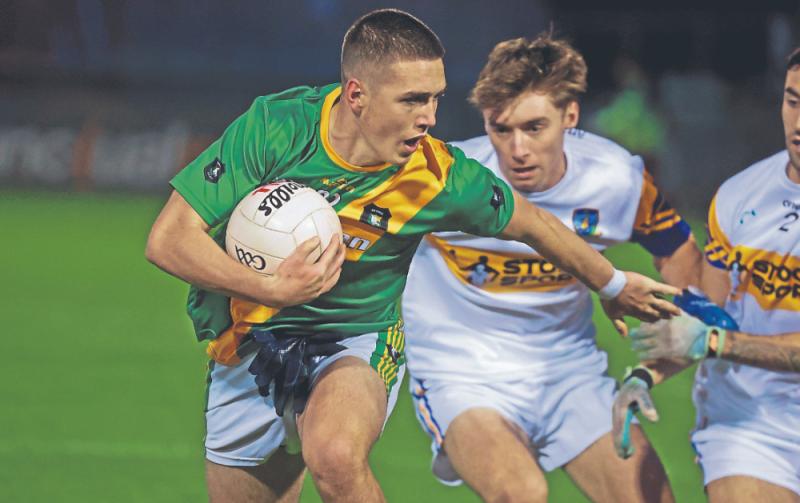 Carl Lennox's 74th minute extra time goal was enough to see Kill through to the final of the Tom Cross Junior Football Championship.

In a game that lacked any real quality it will be remembered for the sheer guts, determination and fight of both teams as they sought that elusive place in the final.

The semi-final brought together two of the form teams of this campaign. When they played each other, back in July it was Kill who won out by ten points but this encounter was much closer.

Tomas Cullen had Grange on the board inside the opening minute after good work from Oran Bergin.
Straight from the kick-out Dara Challoner fielded and his run lead to the leveller.
Paul Kirwan, with the first of his seven points, moved Kill in front after five minutes.

Grange had started to get a grip at midfield and their greater defensive play and workrate yielded three points in a row before the 12th minute Fionn Bergin with two from a free and play and Oran Bergin also from a free after Nathan Doyle was hauled to the ground.

As we entered the second quarter Kill came more into the game and their sheer physical presence forced Grange into giving away frees.

There indiscipline had two of these brought forward and Paul Kirwan duly obliged.
A lovely move involving Kevin Corrigan and Alan Wren set Kirwan up for his third in a row and after 22 minutes Kill were back in front 0-5 to 0-4.

The closing action of the half was all Grange and when Nathan Doyle went on a brilliant run he found brother Lee who levelled it up again. Fionn Bergin capitalised on a free after Tomas Cullen was fouled and he pushed Grange 0-6 to 0-5 ahead as Ryan Moran brought the half to an end.

The second half was a tough battle and the officials were kept busy as players got more accustomed to each other. Paul Kirwan was proving to be Kill's star man and his three points after the break had Kill two ahead again by the 37th minute.

Two pointed frees after fouls on Kirwan himself and Alan Wren before a brilliant mark after Kevin Corrigan's long pass bringing the corner forwards tally to seven.

Grange had started to come more into the game when Oran Bergin put brother Conall through on goal he somehow was blown for over carrying as from our vantage point it was a penalty.

Grange were sprung into action and a Timmy Doyle free from forty metres coupled with points from the Bergins Oran and Fionn had Grange in front three minutes from time.

They tried to hold on but James Lawlor kicked a great point under pressure to bring us to extra time.
Grange did have a late free but just as Timmy Doyle arrived to take it the ball was moved quickly and the chance of a point had gone.

The opening ten minutes of extra time failed to register a score with only Paul Kirwan missing a simple tap over.
On the change of ends and as we headed towards eighty minutes of play Brian Cullen got Grange noses ahead again.

Cramp for both teams was becoming an issue but Paul Kirwan wasn't showing any signs of tiring and after a great run his goal bound effort was well saved by Timmy Doyle but Carl Lennox was on hand to tap home the rebound.
Lennox had time to ad an 80th minute point to seal a 1-11 to 0-11 victory.

Both teams deserve great credit and despite some flared tempers towards the end it was all handshakes at full time.
Carl Lennox was the Kill hero as they advanced to the final awaiting the winners of Straffan and Roberstown.
Grange will be disappointed and their indiscipline cost them at times but this young team won't be away for long.

MAIN MAN
PAUL KIRWAN
Although Carl Lennox will be the Kill hero it was the seven point haul from Paul Kirwan that saw him been Kill's main man.When everyone around him was cramping he found the legs to create that late winning goal.

TURNING POINT
When Grange were two down after 42 the decision to award a free out to Kill rather than a penalty to Grange was a major turning and talking point.

SCORE OF THE GAME
Well all others were wilting around him Paul Kirwans run from the corner flag set up the winning goal that proved to be the winning score.

WHAT NOW?
Kill are through to a final meeting against the winners of the Straffan and Roberstown semi final.
After a Div 4 league title and promotion Grange's season is over.