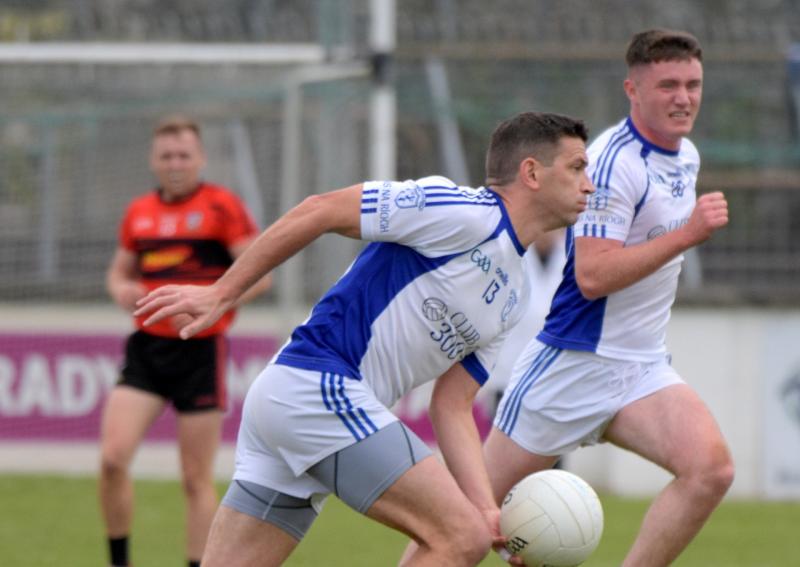 Eamonn Callaghan on the attack for Naas against Celbridge

Naas are back in the SFC final after coming through a stern test againt Celbridge in St Conleth's Park, this afternoon.

In a tight, tension packed  game the sides were level five times in the opening half and 0-5 apeice at the break.

The second half was something similar until the 48 minute when Darragh Kirwan hit a blistering shot into the bottom right hand corner from some 25m out to go two clear, before pushing it out to four.

Back Celbrige and reduced the gap to one on 58 minute before a miss-placed pass out of defence saw Naas gain possession with Darragh Kirwan on the end of the move finding the net again and ensuring the win.

Meanwhile n the Intermediate Football Championship Ballyteague booked their place in the decider after a fine win over Caragh. Leading at the break by five  - 0-9 to 0-5, The Larks won in the end by five points 0-14 to 0-9.

In the second semi-final Sallins lost a six point second half lead as Maynooth came back from the dead to lea in the 62 minutw for the only time of the match. They now take on Ballyteague in final.

Meanwhile the in the Junior Football Championship the two finalists will see a local derby clash between Kill and Straffan.

Kill defeated Grangenolvan on Friday evening, after extra-time by three points 1-11 to 0-11, while on Saturday Straffan got the better of Robertstown in a tight encounter, by two, 0-10 to 1-5.

In the JFC play-off game, Athgarvan got the better of Cappagh by four.