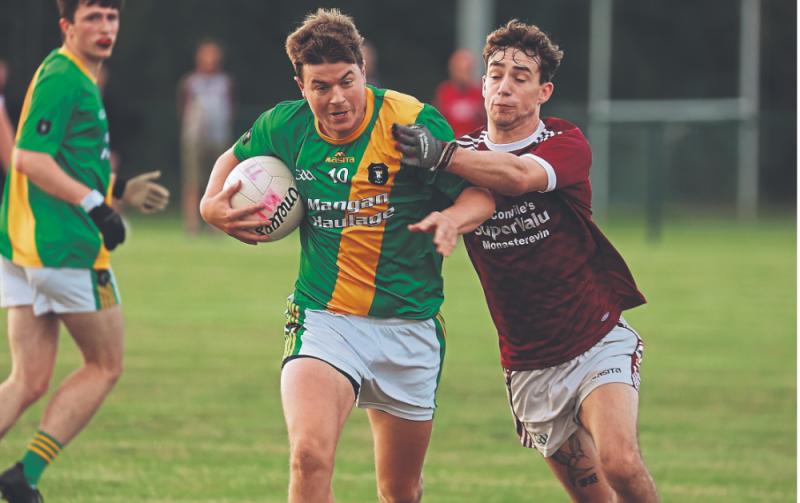 The Auld Shebeen Pub Athy IFC is as tough to call in 2022 as it has been for many a long year.
Some great football has been witnessed, especially in Round 3 of the Group games and it has led to four quarter-finals that are certainly far from easy to predict.

Just two quarter-finals down for decision this weekend with the action getting under way on Thursday (September 1) when Ballymore Eustace take on Caragh in Hawkfield.

Few could have predicted Ballymore to make it through undefeated especially after being relegated in the league but with an excellent return to form, coupled with a number of their missing players returning, they have reached the quarter-final with a 100 per cent record.

On Thursday they take on Caragh who have enjoyed more than a decent campaign to date and would, no doubt, count themselves somewhat unfortunate not to have gotten the better of table toppers Allenwood in Round 3.
The fact that Allenwood keeper, Luke Anderson, was the man of the match gives an indication of how unfortunate the Caragh boys were. They are a fine big side, solid throughout have some excellent players and I have to say I was very impressed, particularly against Allenwood.
Could be a right clash this one but I expect the boys in maroon to prevail.
Verdict: Caragh.

Saturday in St Conleth's Park sees Monasterevan and Castledermot go head-to-
head for a last four spot in the IFC.

Monasterevan dropped just one point, their opening draw, somewhat surprisingly to Suncroft.
Castledermot drew with Leixlip and defeated Sallins by a point making it through on the three point mark.
Both sides will fancy their chances here, both can be very stubborn sides to defeat and while this may not be the prettiest of games, it is all about winning, with Castledermot getting the nod.
Verdict: Castledermot.

Tom Cross Transport Junior Football Championship
Ballykelly take on Robertstown on Friday in the first of the Junior quarter-finals.
Robertstown should have enough to take this one.

Kill and Athgarvan clash in quarter-final no. 2.
Kill finished in second place in Group 1 while Athgarvan have enjoyed a good championship finishing second in group 2 but Kill get the vote to record another victory.

Grangenolvin take on Cappagh in quarter three. Cappagh have made it five from five in Group 2 while Grange, operating in Group 1 finished in third place behind Straffan and Kill.

Toss of a coin this one but Cappagh just might squeeze through but really it could go either way.