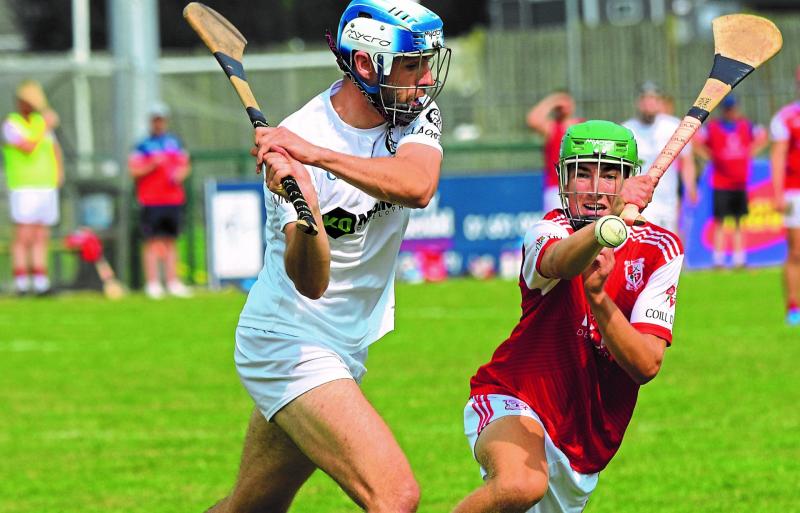 Clane claimed a hard-fought victory over Coill Dubh in their final group A game in this year’s Senior Hurling Championship. The win sends Clane into a quarter-final bout with Confey, the winner of which will play Naas in the semi’s.

Clane looked in command come the 40th minute of this tie with some well-taken scores stretching their lead to a healthy seven. A combination of Coill Dubh’s star man Mark Delaney’s exceptional free-taking with some great scores from play to boot was clawing them back into this one.

One of the key changes to this game was the introduction of Coill Dubh’s Declan Flaherty at halftime. The full-forward rose above his man time and time again claiming the long, searching passes into him.

Flaherty’s fielding prompted the young man operating the scoreboard beside me to call it the ‘Hand of God’ each time he emerged from a crowd in possession of a long ball.

One of those long balls into Flaherty would inevitably provide a goal scoring opportunity and the first one came on 48 minutes with just three points now between the sides. However, Flaherty’s effort was expertly denied by Clane goalkeeper Paddy McKenna who had a brilliant game at both ends of the field, with crucial saves and 0-3 to his name.

A Mark Delaney score would bring the sides within two of one another as we entered the final 10 minutes of this game. The ‘Hand of God’ rose once more as Flaherty turned his man and was fouled but still got a shot away on McKenna’s goal, only to be denied by the Clane and Kildare number one once more.

The foul was brought back for a free and that was comfortably dispatched by Delaney and with 54 minutes on the clock it was one point game.

A long-range Seán Christianseen score brought to an end a fifteen minute spell where Clane scored one point in reply to Coill Dubh’s seven.

The gap back to two and with it brought a raft of changes as Clane sought to close out this game. But there would be one more chance for Coill Dubh, the ball broke inside the box to substitute Ryan Casey who had Paddy McKenna at his mercy with the keeper scrambling across his goal.

Casey swiped at the ground ball drawing celebration from the Coill Dubh faithful, only for them to be dismayed to find out he had dragged his effort wide of the mark.

An Aidan Mooney point put the gap to three but Clane weren't out of the woods yet as a draw was enough for Coill Dubh to claim that quarter-final spot in Clane’s place on score difference.

A scuffle ensued down the Coill Dubh end as they searched for one final chance. The tempers eventually died down and resulted in a red card for Coill Dubh’s Ryan Casey who most certainly had a few minutes to forget.

A Chris Bonus score, who was brilliant on the day with an excellent goal earlier in this game, sealed their fate and Clane would claim four point victory and a crucial quarter-final place.

Another comfortable win for Naas in Kildare SHC over Maynooth