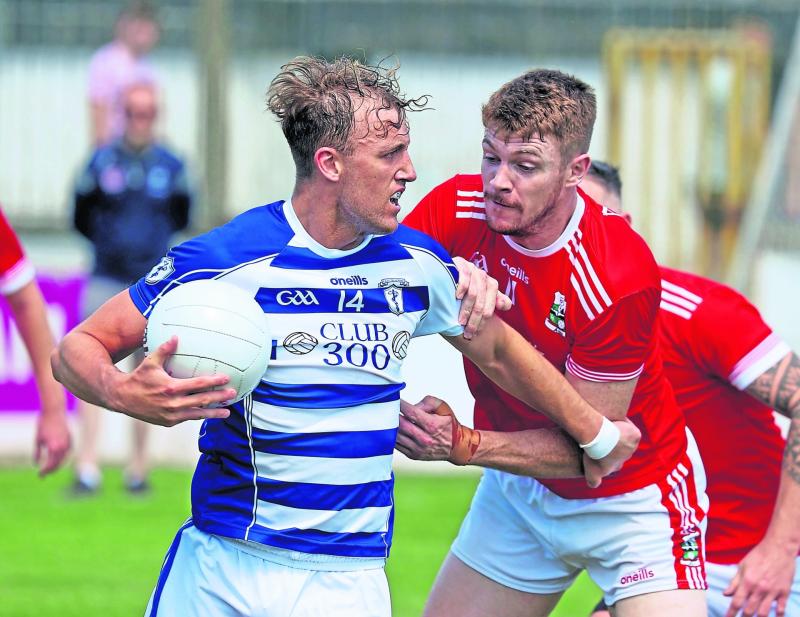 It’s a busy schedule with some incredible games so here is my lookahead to all of the Senior Football Championship games this weekend. Crucial games for sides looking towards the quarter final stage and plenty of jeopardy as sides in Group C and D look to steer clear of a relegation play-off.

This is the first game of an absolutely jam-packed weekend and is by no means a bad way to start it. Carbury are always a good watch and the Moores played out a thrilling draw with Johnstownbridge in their opening game.

This has all the makings of a great game and despite Carbury’s wildcard nature I think Moorefield will have enough to win this one. Although they will want to start more than they did against JTB who ran into a six-point lead at one stage. But to their credit they clawed their way back into it and should show improvement this time out.

Clogherinkoe beat Kilcock last time out in a hard fought if not thrilling game. Clogherinkoe defended astutely and kept their opponents quiet but their ability to do so was most certainly aided by the poor quality balls into the Kilcock forward line.

St Laurence’s meanwhile took a while to get going but did so in brilliant fashion against Confey. Podge Fogarty registered an exceptional 1-7, including a stunning strike from a  sideline ball with the outside of his boot. His scoring tally was more than opponents Confey managed on the day.

This game could be tasty with some of the forward players on offer. Two from either side have stood out for each side in this year’s championship, Larries have the aforementioned Fogarty and Felix Lawler who got 0-2 against Confey but was brilliant in his chance creation for others and really helped kickstart the Larries second half spell that saw them pull away from Confey.

For the Cloghers it's all about Cein McMonagle and Jack Robinson in that full forward line who, similar to the whole Clogherinkoe team played as well as they needed to get the job done last time out. Registering 1-4 between them.

I’m gonna give Clogherinkoe the slightest of edges here as they seem to rise to the level of their opponents wherever they go, which was perhaps to their detriment last time out. I can see this being very close come the final whistle with some great stuff on show from the four forward threats amongst others.

Celbridge upset the status quo against Sarsfields last time out. Although the result was surprising going on past performances, it’s not when you look at the level of quality in that team to potentially produce big moments and win those close encounters.

Clane came out on top in an absolutely thrilling game by a point against Raheens. Clane’s Tadhg Montgomery had a good claim to player of the weekend in the Senior Championship following his performance against Raheens, scoring 1-3 from play which included an incredible solo run that ended with a goal. Montgomery was also relentless in his work rate.

I think Celbridge will have too much for Clane but this could be another great game if Clane perform above what is expected of them.

Towers came up short against Carbury last time out which ramps up the pressure on them for this game as they look to avoid a relegation play-off. As is the case with any team in a loser’s group that took an opening day loss. Despite perhaps feeling they were the better side for much of that Carbury game, they came up short and now the stiffer tests are coming.

Unfortunately I see a similar fate set for them here as they come up against Johnstownbridge who showed great improvement from the poor display they put out in the prelims against Eadestown. JTB dominated the first half before Moorefield clawed their way back in, I see them having enough to dispatch Towers and put them in potential danger.

This game is a crucial one for both sides as both will have their eyes firmly locked onto that third position that gets any winners’ group team a play-off for a quarter final.

Both sides came up short in their opening games against stronger opposition despite their best efforts. There was little to be learned or carried over in terms of how they will react on a more even keel. Maynooth would be favourites and are according to the bookies but in my opinion Eadestown have shown slightly more in terms of impressing and I think that hard work and endeavour they have shown in this championship so far could get them across the line here.

Another huge game for both sides as these two both lost in round one and will now be looking at one another as the chance to avoid a relegation play-off.

Confey came up short against St Laurence’s last time out and offered little in the way of inspiration for supporters as they registered just 0-9 against an open and attacking Larries side.

Similar things could be said about Kilcock in regards to their attacking output against Clogherinkoe. When they were not inspired and driven forward by young Shane Farrell they struggled to create or convert their chances. Long balls into Ciaran Murray were often of low quality and as a result the big full-forward saw very little possession.

The need to win might ignite these teams in Newbridge or it might create enough tension to ruin this fixture entirely. It’s hard to know but this one is a toss up in that sense and I feel Kilcock has shown marginally more in recent times, at least when I have been watching, so I’m gonna go with them in this crucial tie.

Sarsfields got their Senior Championship off to a less than ideal start as they were beaten by Celbridge. The Sash were undoubtedly favourites to top this group and second favourites overall with the bookies for the Championship itself. They now know what they have to do to avoid any further scares and you would imagine they’ll be raring to go.

They come up against a Raheens side who were left heartbroken in their opening game against Clane, beaten by a point in added time. After falling short against Clane they know the size of the task in front of them as they try and claw their way into that key third spot that will give them a quarter final.

Raheens have brilliant scoring potential in their front line, chiefly from corner-forward Rob Thompson who has 3-11 so far in this year's Championship. However the Sash will be raring to go and in all likelihood will get over the line here. Raheens can make this a real game if they respond well to that Clane defeat, but that isn't always easy.

The pick of the games on paper this weekend no doubt as we get a second instalment of the league final pairing but with that extra Championship spice added to the mix.

Naas did enough to get past Eadestown last time out, leading comfortably for most of the game and holding off Eadestown who did everything they could to battle Naas to the very last.

Athy had a similarly comfortable opening day against Maynooth, winning 1-16 to 1-9.

It’s Naas for me in this one again, I just think they are the more reliable and consistent choice. The added Championship connotations mentioned above I think will benefit Naas in this one as opposed to the wilder Athy.

I was able to manage two out of three in predictions based on the games I was covering last time out and if I can get a similar grade again from all eight games I'll go home happy. Let me know yours in comments and replies.