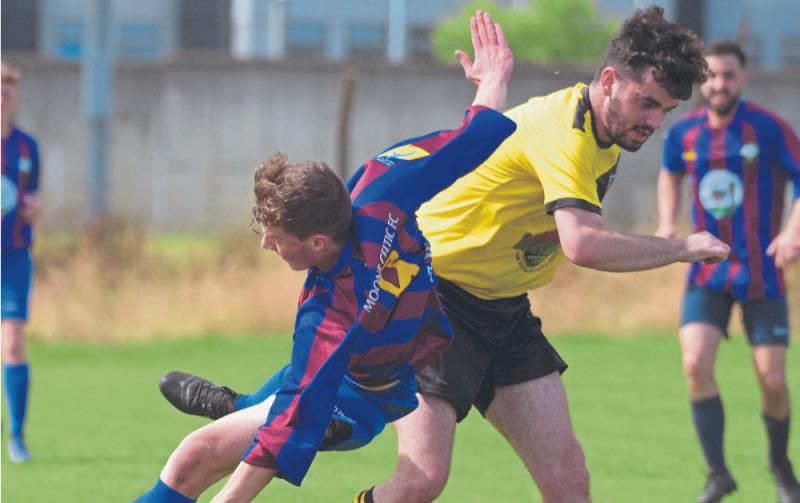 Moone Celtic left Snigs Brogan Park with all three points following a dominant display against Newbridge Hotspurs on Saturday.
Played in warm and windy conditions, Moone settled quickly when a ball over the top from Kian Lawler was headed into his own goal by Hotspurs defender Kelvyn Kavanagh and Moone went 1-0 up.

Hotspurs didn't lie down and produced a shot themselves going just wide. Mark Kavanagh starting in midfield lost and then won back possession and he shot narrowly wide.

Hotspurs levelled the game on 12 minutes when Sam Rooney played a nice pass to Sam Morrissey who controlled and fired his shot past the keeper.

From the restart, Moone started to assert themselves on proceedings and with the midfield trio of Sam Fogarty, Dylan Wynne and the busy Mark Kavanagh getting on top.

Moone’s second was only a matter of time away and on 16 minutes Sam Fogarty put Moone ahead again. Moone won a throw in the Hotspurs half and Kevin Power's throw was met by Tadgh Phelan and a Hotspurs defender resulting in a corner.

Evan Farrell swung the ball in and Sam Fogarty latched onto it from close range.
Hotspurs defended stoutly and they had outlets, particularly on their left side but Moone always looked dangerous and Adam Steed got his first and Moone's third on 25 minutes after being sent clear by Mark Kavanagh.

Soon after Steed turned provider but his cross was just a fraction too high for Tadgh Phelan at the far post.

On 35minutes Hotspurs attacked and won a corner which was gathered by Cian Flood. From the play, a Lee Ryan pass was flicked on by Evan Farrell to Adam Steed who crossed in from the right. His cross was met by Tadgh Phelan who headed into

Mark Kavanagh's path and he volleyed into the roof of the net from the edge of the box to make it 4-1.
Hotspurs continued to defend but could do nothing about Moone adding their fifth before half-time.

Mark Kavanagh worked tigerishly to win the ball back and set Steed free and he lobbed the onrushing goalkeeper to gather his second. Indeed he was unlucky not to get his hat-trick before half-time when he cut in from the right but shot across goals was narrowly wide.

On the stroke of half-time Tadgh Phelan, just off the plane from holidays, was doing his best to score was set free following good link up play between Dylan Wynne, Sam Fogarty and Adam Steed but he too shot narrowly wide.
The score finished 5-1 going into the break to the visitors.

As always with Hotspurs, they never lie down and for the first 15 minutes or so of the second half they really took the game to Moone but the Moone defence, marshalled superbly by Kevin Power and Cian Flood in goals kept them at bay.
Moone started to slowly get back into it with the midfield trio getting the upper hand.

In the middle of all this action, Dylan Wynne picked up a foot injury and was replaced by Jodh Thompson. Hotspurs again started to make in roads into the Moone half and won a couple of corners which were cleared. on sixty eight minutes, a long range Hotspurs effort was gathered by Cian Flood but the goal of the game soon followed.

Hotspurs pounced on a Moone clearance when good play from Dylan Lee saw the ball fall to Morrissey who fired in a shot from about twenty five yards out to make it 5-2.

After this, Moone took complete control for the remaining twenty minutes or so. Mark Kavanagh got his second a minute after the Hotspurs goal and two minutes later he scored his third, beating two defenders and slotting under the goalkeeper to claim his first hat-trick at senior level, much to the delight of the visiting support.

Charlie Rafferty and James Keogh entered the fray for Lee Ryan and Evan Farrell. Loudest cheer of the day came soon after when Tadgh Phelan eventually got his goal, lobbing the unlucky Hotspurs goalkeeper from close range. with ten minutes remaining Moone made their final two substitutions, T.J Kane and Killian Harney Lawler for Sam Fogarty and Tadgh Phelan.

And so the game finished 8-2 to Moone despite the best efforts of Gareth O'Hanlon and Sam Rooney of Hotspurs who were relentless up front but just could find no way past a stubborn Moone defence.

Many good displays from all on the Moone team but Man of the Match award has to go to Mark Kavanagh. Not alone for his hat-trick but his tireless work-rate in midfield was the foundation for this victory.

Best for the home side were Peter Higgins, Arthur Sheridan, Gareth O'Hanlon and Sam Rooney.