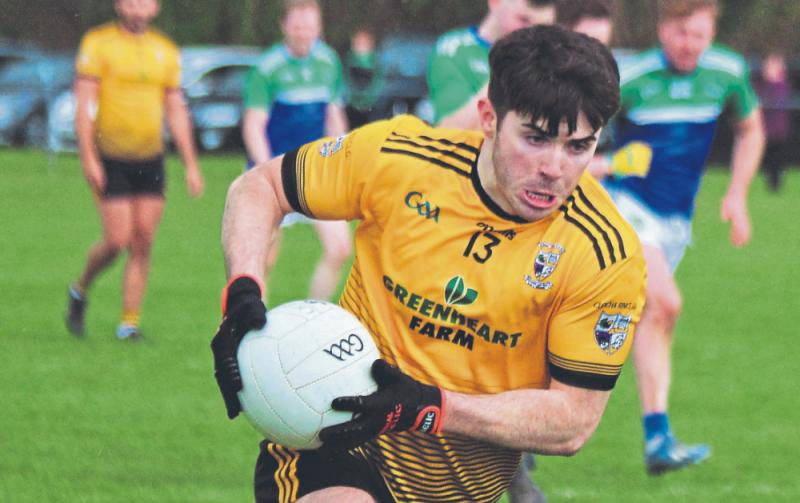 Clogherinkoe beat Kilcock in a hard fought opener to their Senior Football Championship Group D campaign. Little could be made of the opening five minutes as the sides registered a score a piece. Kilcock’s Shane Farrell raised the first whte flag of proceedings with a superbly taken score. Farrell was excellent throughout this game and the midfielder was no doubt Kilcock’s biggest scoring threat, with his exceptional long distance free-taking.

Clogherinkoe danger man Cein McMonagle got his side scoring underway with a well-taken point. It was a point a piece after five minutes with the crowd waiting for this one to explode into life. And the dramathey so craved wasn’t far away as the Cloghers Jack Robinson beat his man and was bearing down on Stephen Cussen’s goal when he was brought down in the box. There was a pause as hundreds of eyeballs locked onto referee Henry Barrett who signalled for the penalty.

Six minutes had gone in a tight game, no doubt plenty of pressure for penalty taker McMonagle who stepped up to the spot. But the forward made no mistake and side footed his effort into the top left hand corner. Given how the scoreline ended up, the dispatching of this penalty was absolutely crucial.

Kilcock were always trailing from this point and struggled to create opportunities as their opponents sat deep. The Clogherinkoe defensive shape worked well in limiting Kilcock to speculative shots, drawing several wides from their opponents in the remaining minutes of the half.

However the added defensive shape stunted creativity down the other end as Clogherinkoe failed to score for a period of 20 minutes in the first half. It was far from pleasing on the eye but the Clogher’s opened up in additional time and managed two quick scores to send themselves in at the break in the lead, 1-4 to 0-5.

The first score of the second half came from Kilcock’s Ciaran Murray, the towering forward drew plenty of goal chances for his side against Celbridge, although they were not taken. The man Kilcock often relied on to make something of long balls into him had little to no joy on the day. Largely through no fault of his own as supply was a mix of wayward and cut out before it reached him.

It was tight and tense for the remainder of this game as Clogherinkoe looked scarcely interested in doing anything other than protecting their lead for the final 10 minutes. But when Shane Farrell sent a brilliant 45 between the sticks, the gap was down to just one.

The dark arts were now in full motion as controlled possession was coupled with some time wasting to get over the line for the leaders in this crucial game.

Kilcock just could not get that final opportunity they so craved and as we entered the fifth minute of additional time the ball was turned over and Cein McMonagle broke away and converted a point to put this game to bed for Clogherinkoe.

Blood sub: Caelum Flanagan on for Aedan Boyle (26 minutes), Aedan Boyle back on at half time.

Subs: Shane O'Rourke on for Danny Maguire (Half time), Mark Durkan on for Rory Nairn (50 minutes).