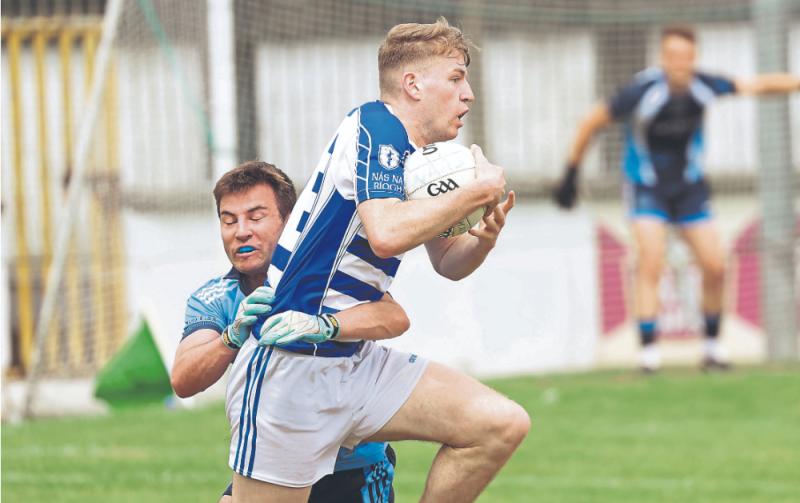 Naas recorded a seven point win over Eadestown in Group A of the SFC at St Conleth's Park on Saturdy afternoon, the second game of a four game programme.

While Naas were never in danger of losing this one, full credit goes to Eadestown who worked their socks off from start to finish, had an excellent second half and while they lost, they will gave a team or two much to worry about before this championship is over.

Naas had a lot of possession but certainly did not convert anything like what they would have expected to but have no doubt there is a lot better to come from the champions.

The game got off an explosive start as right from the throw-in, won by Naas, a quick move ended with Dermot Hanafin being fouled in the square. Up stepped Eamonn Callaghan who coolly planted the ball to the left of Eadestown keeper Mikey Quinn.

A big run from Padraig Tuohy saw the county man pass a number of defenders before being fouled and Cian Bolton duly popped over the free.

Eadestown lined out without the influential Emmet Bolton, a big set-back for Dessie Brennan's side, ,while Eoin Cummins picked up an injury in the warm-up.

Darragh Kirwan hit a couple of early wides before Shane Bergin punched a point, quickly followed by an Eamonn Callaghan free, and another from open play to leave the score reading Naas 1-3 Eadestown 0-1 with 15 on the clock.

Ronan Slattery picked up a yellow for a foul on Eamonn Callaghan — the Naas veteran received a few heavy knocks throughout the game – this time Luke Mullins came forward and extended the lead.

Daragh Kirwan had five attempts at scoring at this stage, hitting four wides and one off the post before he set up Paul McDermott; Callaghan added a point before Dermot Hanafin made it 1-7 to 0-1 after 28 minutes.

Eoin Doyle picked up a yellow for a foul on Conor McCarthy, Rian Boran got his side's second of the afternoon to leave it Naas 1-8 Eadestown 0-2 at the break.

On the resumption and Darragh Kirwan finally raised a white flag before Mikey Quinn denied Eamonn Callaghan with an excellent save.

Eadestown had plenty of ball but their problem was up front where a final pass, coupled with some excellent defending from Naas, saw them struggle here.

Dermot Hanafin found James Burke inside and he made it 1-10 to 0-4 on 38 minutes.
Eadestown then enjoyed their best period of the game hitting four points on the trot from Eoin Conneff (2), Cian Bolton and Conor McCarthy to reduce the deficit to five.

Luke Mullins converted a free, Ben Fitzsimons replied while Alex Beirne got his only point of the day followed by another Eoin Conneff.

Darragh Kirwan, Brian Stynes and Eamonn Callaghan completed the Naas scores before a bit of skirmish developed which ended with Alex Beirne and Cian Bolton being shown yellow.