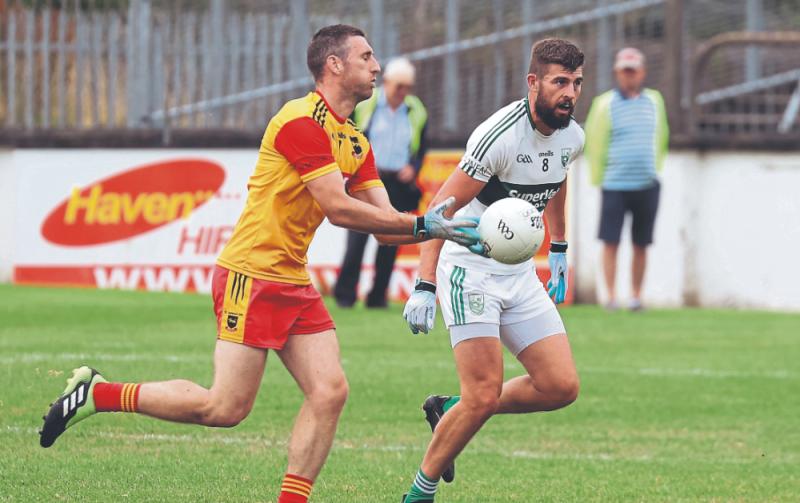 St.Laurence’s beat Confey to get their Senior Football Championship group D campaign off to the perfect start. It was a crucial tie for both sides in a group that is sure to be full of tight games.

Larries talisman Padraig Fogarty more than delivered in this one with an incredibly impressive 1-7, managing more scores on the board than his entire opposition today.

It was an underwhelming first half from both sides with Confey leading by one at the break but St.Laurences came out of the second half traps like a shot with Felix Lawler opening the scoring.

The corner forward would then be involved in the next three scores, setting up his teammates Chris Fenner and Padraig Fogarty for points. Lawler was instrumental in the Larries second half surge and put on a brilliant display in the second half, which included an excellently dispatched long range free off the deck.

Lawler’s contribution to wasnt limited to points as his effort came back off the post to Adam Steed in the 48th minute who passed to that man Fogarty to smash home and put this game to bed. That goal left the score at 1-12 to 0-7 and it was all but over.

It seemed to be as simple as Confey played as well as they did in the first half but Larries had raised their game, Confey had no answer to it.

Paul Divilly got scoring proceedings under way in the first half with a well-taken point after just 30 seconds. It would be another 10 minutes before we saw another white flag raised as both got off to a sluggish start. It was Divilly again who would break the long wait for another with another decent point.

Half way through the first half the score was still stuck at 0-2 to no score when Chris Fenner opened St.Laurence’s account for the day. Spectators can thank Fenner for that score more than usual as the game's quality seemed to improve from this point onwards.

Laurence’s through first Jason McHugh and then Padraig Fogarty got themselves back within touching distance of their opponents. But James Gately registered Confey's score of the game with a brilliant point.

A simple set-piece in response from Padraig Fogarty brought the sides just a point apart at 0-5 to 0-4 in Confey’s favour. But the strong breeze on the day would be on the Larries side for the second half.

The Larries found that scoring touch of old in that second half and their key forwards really came alive when it mattered most. The win is massive for St.Laurence’s in this group and puts them on a strong path to get a quarter final spot.

Conversely Confey looked to improve very little from their preliminary game against Clane despite their seemingly stronger lineup. They find themselves in a tough spot in group D now.

Subs: Neil Ryan on for Oisin Casey (Half time).