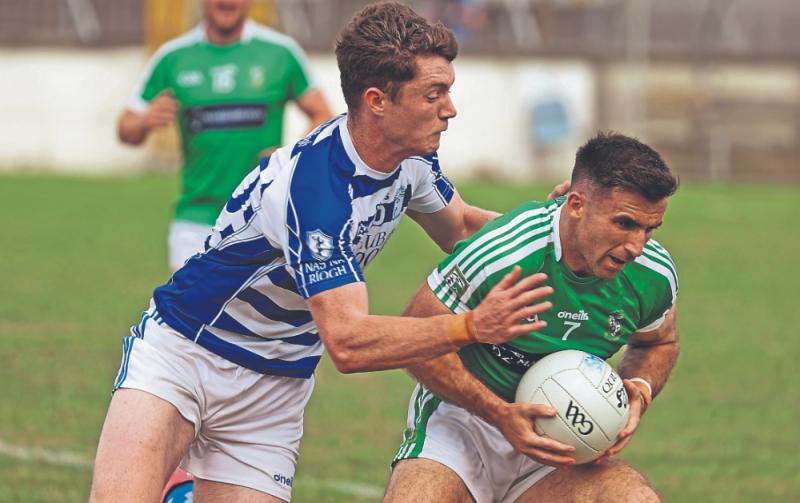 It took extra time to separate county champions, Naas and Moorefield in the SFC clash (Preliminary Round) at St Conleth's Park on Saturday afternoon.

And in the end it was the guile, belief and strength in depth that saw the champions edge it after a pulsating 80 minutes plus.
On an energy-sapping afternoon both sides are to complimented for giving it their all in an extremely tight game that saw Moorefield lead for most of the time but Naas never panicked, held their heads in the belief that it would come right for them in the end and that is how it panned out.

Having said that Moores, with young, inexperienced players, many making their championship debuts, had their chance to clinch it with a 45 deep into injury time but the kick, into the breeze, never threatened and so it was two periods of extra time.
Moorefield, through Gary Redmond and Eoin Meehan took a two point lead in extra time, Naas responded with Darragh Kirwan and Brian Kane leveling it up before Dermot Hanafin edged Naas ahead before the break.

Points from Kirwan and Hanafin followed by a goal from the latter put the champs six clear but Moorefield refused to yield and came back with a Harry O'Connor goal and a Ciaran Kelly point but it was not enough the long whistle arrived Naas clinching it by two, 1-16 to 1-14.

It was Dermot Hanafin and Eamonn Callaghan who opened for Naas but The Moores hit back with Ciaran Kelly, James Murray and Eoin O'Connor combining with the latter firing over.

Darragh Kirwan got his only first-half point before a fine effort from Eamonn Callaghan (Moorefield), Aaron Masterson, Jason Philips and another long-range effort from Callaghan saw Moorefield open a two point lead, 0-6 to 0-4 with 28 minutes gone.

That was pushed out to three after a brilliant catch by Liam Healy set up Ciaran Kelly and Moorefield led 0-7 to 0-4 at the break.

Alex Beirne reduced the lead on the resumption, Evan O'Brien converted a free and Aaron Masterson, another excellent long range effort, had four between them again, 35 gone.

Darragh Kirwan and Jason Philips exchanged points before Kirwan reduced it to three as we reached the mid-way point.
Naas were certainly upping the ante but The Moores were working their socks off but two quick points from Dermot Hanafin and Paul McDermott left just one in it with 51 minutes gone.

It was tight and tense at this stage with both sides going at it hammer and tongs.

Finally Naas drew level through Luke Mullins (free) on 54 and the same player had his side in front five minutes later with a similar score.

Moorefield hit back on 60 after Ryan Houlihan was fouled, Adam Tyrrell tapped over the close-in free to make it 0-11 apiece.
That late 45 for Moorefield failed to find the target and on to extra time with the champs very relieved to come out on top in time added on.

A tight, cat-and-mouse game, very tactical, intriguing in many ways that could have gone either way but in the end Naas showed that they will certainly not give up too easily as they bid to make it back-to-back senior titles.

The Moores, disappointed no doubt, but all things considered have to be more than pleased with their performance.

The second game of the four game programme at St Conleth's Park was a strange one to say the very least with Sarfields taking on Clogherinkoe.

It was a game that never really took off with The Sash beginning impressively hitting the opening seven points before Clogherinkoe registered a point.

The sending off of Gary White certainly had an impact, the veteran player contested a high ball with Clogherinkoe's Daniel Grehan but while the Clogh's man fielded impressively, he then fell to the ground holding his back. The match official spoke to his linesman before issuing a straight red card and with Sarsfields full back, Kiean Dwyer already on a black a few minutes earlier it left the Newbridge side with just 13 players at that time.

A Jack Robinson goal, just after the red card, put some life into the game and it was touch and go for the rest of the contest albeit with The Cloghs chasing the game.

Dwyer then received his black, soon followed by White's red before Jack Robinson received a pass from Aedan Boyle with the no. 13 firing past Marc Courtney-Byrne in the Sarsfields goal and when Daniel Grehan registered a fine point the lead was back to just two with 27 minutes on the clock, Kieran Dwyer returned before the break, Ben McCormack fired over as Sarsfields led at the interval 0-8 to 1-2.

Alan Smith and Jack Robinson exchanged points on the resumption in a game witnessed by a very paltry attendance.
Ben McCormack added a point before two points from Robinson (one free) reduced the gap to just one with 38 minutes on the clock. Cian McMonagle was the next player to see black.

Alan Smith (free) and Jack Robinson (free) followed by another 'Smithy' free had two between them as Cein McMonagle returned to action. And soon after McMonagle cut the deficit again.

Points from Ben McCormack and Alan Smith had The Sash three ahead , 59 minutes on the clock, a clock that obviously did not take to the warm conditions as it stopped and started a few times during this game.

Callum Bolton was the next recipient of a black card and while Clogherinkoe hit the two last points, a Jack Robinson (free) and a point from play from Cein McMonagle, it was not enough as Sarsfields held on to win by two on a final score line of Sarsfields 0-14 Clogherinkoe 1-10.

A win but lots for Davy Bourke to ponder with this insipid display, no doubt Sarsfields will be hoping that Barry Coffey — the man that pulls the strings for The Sash — will be back in action this coming weekend.