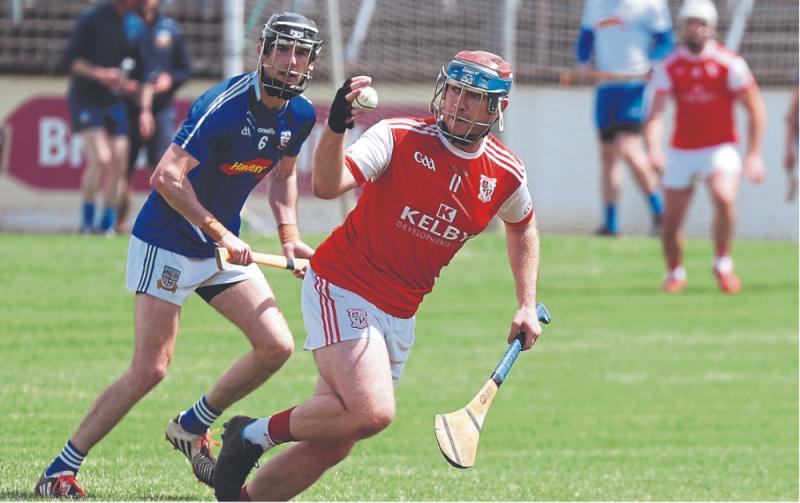 The result was never in doubt as Naas easily disposed of Leixlip in the preliminary round of the Senior Hurling Champion-
ship on Saturday.

While the game was competitive to begin with, two goals in each half helped the county town champions outgun their opponents.
Jack Sheridan contributed 2-6 of the final 4-23 tally while his brother Charlie also scored 1-3 as Naas ran riot in attack.

On the other side Leixlip only registered three points from play over the course of the hour and they really struggled throughout.

In what was their first championship game since winning the All-Ireland Intermediate title in Croke Park last February, Naas provided a very experienced starting lineup that included five of the starting 15 from Kildare's Christy Ring Cup victory.

Leixlip started the better though and Cian Bracken knocked over a third minute free to give the John Doran managed side an early advantage.

That point sparked Naas into life though as Leixlip succumbed to a scoreless 25 minute spell which saw the defending champions add 2-10 to their tally.

Jack was unmarkable all afternoon and after a long ball broke free in the 11th minute, he made no mistake in shooting past Keith O'Callaghan in the Leixlip goal.

A pointed brace from James Burke then arrived before Cathal Dowling netted Naas's second goal in the 13th minute.
Naas duly added on further points from the two Sheridan's and Brian Byrne before Leixlip got their second point.

Jack Sheridan continued to dismantle the Leixlip defence at the end of the half when knocking over his sixth point while he also had a shot for goal saved when set up by Cathal Dowling.

Leixlip finished the half with another Cian Bracken free but the score board didn't look pretty from their point of view as Naas led 2-11 to 0-3 at the half-time break.

James Burke and Ross Kelly contributed the first three points of the second half as the game really began to suffer as a contest with Naas much the dominant side.

Leixlip corner back Conor Burke got forward for Leixlip's fourth point in the 35th minute before Naas hit another blistering scoring spree.

Tom Mullally's outfit notched 1-5 without reply between 36th and 50th minutes with Charlie Sheridan grabbing the goal on the back of points from Sean Gainey, Cathal Dowling, James Burke and Kevin Whelan.

By this point Naas held a massive 24 point initiative and while Leixlip got a couple of consolation efforts from Jack Travers and James Canning, it was still the winners that finished the better and they didn't let up with points from Peter O'Donoghue, Simon Leacy, Conor Dowling and Cathal Dowling before Jack Sheridan rifled in a stoppage time goal.

A statement opening round display from a Naas side that will be very difficult to beat over the course of the rest of the championship.

A devastating final quarter gave Coill Dubh a fully deserved four point victory over Celbridge in the Preliminary Round of the UPMC Senior Hurling Championship at St.Conleths Park on Saturday afternoon.

Coill Dubh looked in a degree of bother when Celbridge led 1-12 to 0-9 at the 40 minute mark but remarkably the 2021 county finalists failed to score for the remainder of the contest as Coill Dubh racked off 10 points without reply.

Johnny Byrne and Mark Delaney led the charge for the winners as they scored 17 points in total with Byrne's eight point tally from midfield paricularly striking.

After a couple of disappointing championship campaigns, Coill Dubh started the 2022 version on the front foot and they almost had a goal within seconds of the start after a batted Ryan Casey effort was saved by Fiachra Ó Muineachéin.
Billy White then edged Celbridge in front in the 4th minute before Coill Dubh replied with efforts from Mark Delaney and Johnny Byrne.

Celbridge went on to get the next three points as White, Michael O'Donovan and Leo Quinn edged the Hazelhatch Road outfit 0-4 to 0-2 ahead.

Coill Dubh hit back with two booming efforts from play as Johnny Byrne added to his sizeable tally and when Delaney and Adrian O'Sullivan also found the target they moved ahead on the scoreboard.

Fresh from a year representing the Kildare footballers, Fergal Conway pointed in the 29th minute when a goal may have been on before Delaney and Pat Leahy swapped scores as Celbridge went into the break ahead 0-8 to 0-7.
Although Mark Delaney equalised in the 32nd minute, the opening to the second half was rather forgetful as the sides shared eight wides in the space of five minutes.

Celbridge eventually broke the period of wastfulness when Quinn, Leo Hogan and Gerry Keegan knocked over quick-fire points and while Delaney responded with a 65, the leaders appeared to be in full control.

A second Keegan point arrived before Sam White netted the game's opening goal when shooting to an empty goal after Fergal Conway blasted by a couple of Coill Dubh defenders before White landed the finishing touch to the move.

That goal arrived in the 41st minute and at that stage Celbridge led 1-12 to 0-9 but remarkably they failed to score again over the following 20 plus minutes.

Almost immediately Coill Dubh were back to within a point when five points in six minutes from Delaney, Byrne and Dylan Brereton left the game in the balance heading into the final 10 minutes.

Celbridge had a couple of goal chances in the aftermath with Conway and James Dolan both having efforts saved from Owen Lenehan and in the midst of a Coill Dubh surge, they also hit a couple of bad wides.

Byrne levelled up matters in the 54th minute before a Delaney free three minutes from time gave the 11 time county champions the lead.

Byrne was having one of those days and he added two more points from play before the end and when Delaney nailed his sixth free of the afternoon, victory was sealed on a 0-19 to 1-12 scoreline.

A big win for a Coill Dubh side that not only sees them advance to the winners group but they are also assured of their championship safety after flirting with relegation in the last few seasons.