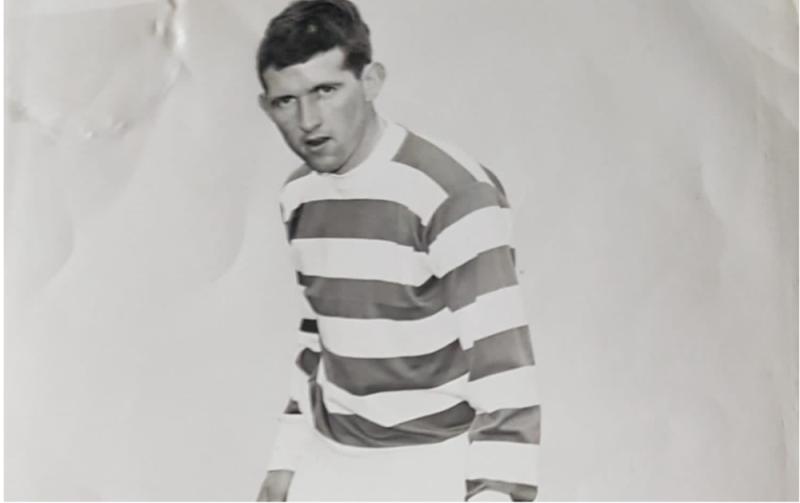 The first Kildare man to get a cap for the Ireland soccer, team and the only one until Bournemouth goalkeeper Mark Travers got his debut in 2019. Mick Kearin is from Kildare Town and was happy to confirm when I asked him that he is still there now.

Few have been capped for Ireland from Kildare and even less have played against European giants Bayern Munich. But Mick Kearin will definitely be the only one to have shared a beer with World Cup winning captain Franz Beckenbauer.

Even more impressively than to share the pitch and a pint (or steiner as it would have been) with such players as Gerd Müller and Sepp Maier was how Mick’s Shamrock Rovers side looked to put it up against the great Bayern Munich in the 1966–67 Uefa Cup Winners Cup.

Naturally the Irish media swirled around this fixture and Mick himself, as the versatile Kildare man would be the one marking the great Beckenbauer. Mick and Franz were called for press duties side by side.

“I went to a press interview with Beckenbauer in Powers Hotel in Stephen’s Green. Friends today and deadly foes tomorrow, they captioned the photo,” Mick recalled.

However, that Shamrock Rovers side weren’t there to create some fond memories to look back on in years to come. They were looking to upset the applecart and had the Bavarian side on the ropes when they visited Dalymount for the first leg of their knockout tie.

“I have won three (FAI) cup medals in a row but my favourite result was the one against Bayern Munich. We should have won the first leg at Dalymount too,” Mick said of the 1-1 draw.

“The reason we didn't was when we had them on the back foot and the ball went into the crowd our crowd wouldn't give the ball back for about 10 minutes, trying to waste time. But that gave them time to regroup and get themselves together and they got the equaliser.”

Dramatic in its own right as the Germans visited north Dublin but the spectacle would be enhanced 10-fold as Rovers made their way across Europe to Munich's Grünwalder Stadion.

Despite the scare of scraping a draw away from home Bayern’s board were more than confident their boys would get the job done on home soil. Bayern sold thousands of tickets for the next round of the European competition before the second leg was even dealt with and at half time of that game, they probably thought they were right to.

“We were 2-0 down at half time, we came back and pulled it back to 2-2. With two minutes and thirty seconds left they got a free kick and Beckenbauer threw the ball on the ground and lashed it forward,” Mick explained.

“It should have been re-taken, Muller jumped up and nodded it down to the centre forward who knocked it in. That was 3-2 for them but we would have won on away goals. It was terrible, we were so close to history.”

Mick’s disappointment and frustration with how it all played out could still be felt speaking to him over 50 years on from the dramatic defeat. Summed up by a comment that was slipped in of “I reckon that referee got something” accompanied by a laugh.

Not only did Mick and his Rovers side nearly knock Bayern out of Europe, the Bayern board would have lost “we were told at the time, a quarter of a million” in ticket sales had they been eliminated. To see the inside of a corporate box in Munich in those final stages would have been theatre for the ages.

The painful result aside, Mick reflects fondly on his European adventure as Shamrock Rovers took to the beer halls of Munich.
“We went for dinner out in the Bavarian alps before the second leg. They (Bayern) invited us out after a home fixture of theirs and it was a great time. We didn't speak much of each other's languages but they were nice fellas,” Mick said.

“The night before the match we were all in a big beer hall in Munich. There were only two lads that didn't drink, the rest of us enjoyed a few steiner's. It was like we were on our holidays.”

There is a certain poetry to Mick’s sporting highlight being him in a Rover’s team against a European giant because it mirrors his own first ever match-day experience.

After a half day from school and a bus trip, Mick saw his first live game, Manchester United against Shamrock Rovers in 1957. It was the famous United side of manager Matt Busby, affectionately known as the Busby Babes. The visitors didn't half put on a big show beating Rovers 6-0.

That game took place just five months before the Munich air disaster that would tragically kill 23 people on the flight, including members of the Manchester United team, alongside fans and journalists.

Rovers manager for their Cup Winners Cup endeavours against Bayern as well as an 8-2 victory over Spora Luxembourg in the previous round was Liam Tuohy. Tuohy played against the famous United side in Mick’s first visit to Dalymount, granted the 6-0 might be one to forget for anyone not in the stands or wearing red.

Mick’s sole Ireland cap was a big moment for both himself and as we would come to realise, for Kildare. But the event doesn't exactly conjure up fond memories as a mixture of defeat and more chiefly illness took away from what he hoped would have been a special occasion.

“I came on and I was taken off. I wasn’t feeling great before the game and when I came home I wasn't well at all. I had to go to the hospital with chest pains after (the match) and I ended up there for three months. I had pericarditis, swelling and irritation of the tissue surrounding the heart,” Mick described.

“It was nearly two and a half months before I was even out of the bed. It was probably something I’d had before but was never noticed. I was out of football for about two years and
was never the same after it.”

A tough end to a career full of both victories and memories but Mick is still going strong at 79 years old and the man from Kildare will go down in local folklore as having one of the most fascinating careers in sport there has ever been.