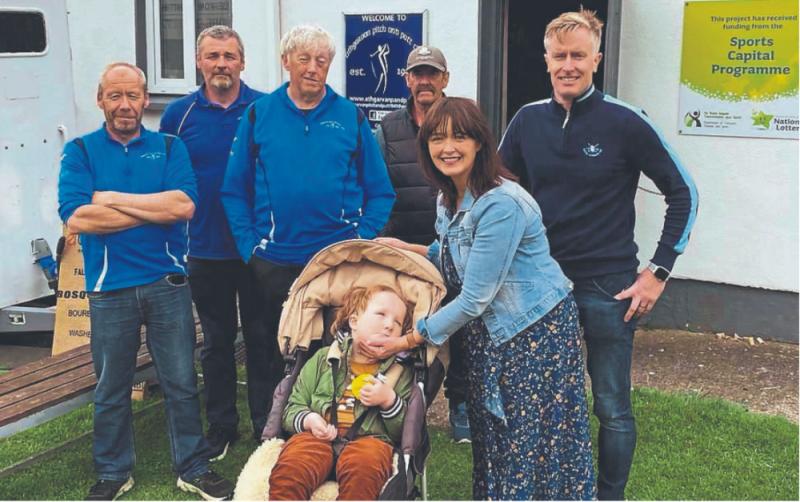 On Saturday morning, June 11, a Charity Cycle in aid of raising funds for vital medical equipment for a young boy with a severe condition named Oscar Fitzgerald made its start in Dungarvan, Co Waterford with the intention of arriving in Athgarvan, Co Kildare later that day.

Paddy and the boys set off on their journey with good conditions and the wind against their backs to help them along the way.

In the meantime, the Athgarvan Pitch and Putt Club was busy getting ready organising their charity Scramble in conjunction with the boys on the cycle.

Declan Power (secretary) and Co had dreamt up the idea to raise further funds for Oscar's care by holding a fundraising scramble (2 sessions).

The first Pitch and Putt shot gun session commenced at 9:30am, shotgun start with fifteen teams of three from various clubs took part in support.

All of the Kildare clubs banded together in a unified effort to help the Fitzgerald family and young Oscar. Not only did Kildare players support the event but teams from Loughlinstown, Kilbeggan, Eden, Bagnelstown, Rochfordbridge and Elm Hall all showed their support by playing. Many other clubs around the country also made donations to the 'Wilde about Oscar' gofundme link as well as many others who were associated with the Pitch and Putt community.

As the first session drew to a close, those playing in the second session began to arrive and sign in. Many of the players in this session were relatives of young Oscar, including his grandparents Josephine and John and his aunt Helen.

As spot prizes were handed out to the first session winners, Athgarvan member Micheal McMarlow got the second session underway.

Athgarvan's intention had been to raise just over €1,000 with both sessions being supported but what would develop during the day with donations was to leave the organisers speechless.

In a statement by the clubs secretary Declan Power, he said: “I cannot put into words my admiration and gratitude for the pitch and Putt Clubs of Kildare who rallied behind us for this event and gave us such massive support for Oscar and his family.

“In fact, clubs from around the country have come to our aide and I have such huge respect for the entire pitch and Putt community in general who showed such support.

“I also want to hugely thank the Kildare Co Board who donated €1,000 to Oscars fundraiser. Athgarvan raised a further €2,055 bringing the total now to €3055. On behalf of the Fitzgerald family and the Athgarvan P&P Club, I cannot thank you all enough for your generosity.”

With both sessions over at 2pm, the wait for the cyclists began. At this stage, they were close to Suncroft, where a garda escort would lead them the rest of the way.

At approximately 3pm, they made their final turn into the car park of the Athgarvan Pitch and Putt Club and were greeted by family and friends. The Clubhouse was ready and waiting with refreshments, snacks etc for these troopers.

Oscar's mum and dad, Karen and Sean were blown away by the huge response, generosity and how the day had gone. They conveyed their deepest thanks to the cyclists and the Athgarvan P&P Club for taking on such a huge task for them.
It is times like this, when there is so much negativity in the world that we see such an event take legs and we witness generosity, comradery, respect, thoughtfulness and joy.

And I can truly say, we are all 'Wilde about Oscar.'