Sarsfields move top of Division 1 with victory over Raheens 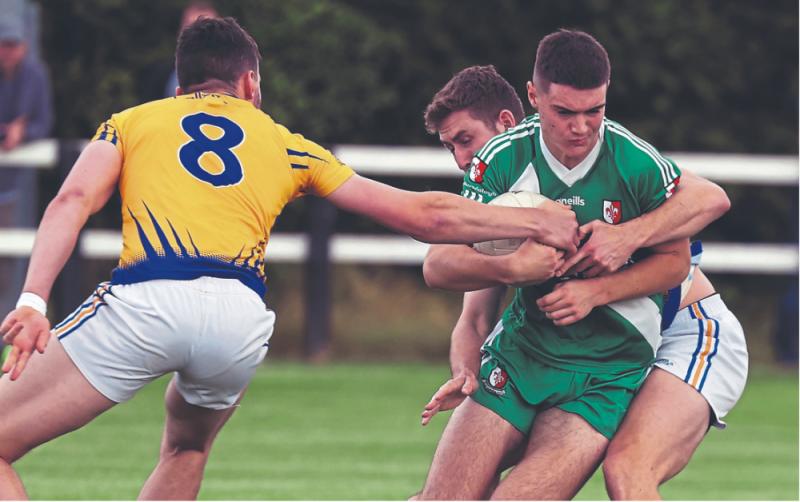 Sarsfields overcame Raheens by two points in a competitive SFL clash at Tom Lawler Park, Caragh on Saturday afternoon.
It was the visitors who got off to a flying start hitting their opponents early and often as the home side, not for the first time this season, began slowly and took a long time to get into the game.

The Sash's opening score was decisive and while it may have a look of fortune about it when an intended pass inside was partly blocked, Karl Hartley was on hand to knock over the head of the advancing Declan Campbell.

Barry Coffey added a free before Raheens opened their account through Liam Power after seven minutes.

But it was Sarsfields, with what can only be described as a team far from full strength, who dominated the score board, Barry Coffey converted a mark from close to the side line before Colin Bolton made it 1-3 to 0-1 after 13 minutes.

A fine run by Mikey McGovern looked promising but his pass inside was over-cooked and the danger cleared before the visitors added two more points from Cian Costigan and the accurate boot of Barry Coffey as The Sash now led 1-5 to 0-1.

That was extended with another free from Coffey on 20 minutes with the home side looking all at sea and now trailing by no less than eight points with 20 on the clock.

In fairness though Frank Hanniffy's side enjoyed a great final ten minute spell before half-time.

Paddy Woodgate got the ball rolling before the same player was fouled and Rob Thompson fired over; Liam Power used his strength to run through The Sash, firing over and in the next move, Collie Power put Mikey McGovern through and he made no mistake firing past Mark Courtney Byrne in the Sarsfields goals to make it 1-5 to 1-6 with 29 minutes gone.

And before the break the sides were level when Paddy Woodgate fired over to cap a great period for the home side who went in at the break having cut back a big deficit to be level at 1-6 apiece.

A great cross-field kick pass from Tadhg Hoey set up David Shelvey who fired over and soon after Dan Nea left two in it with a fine point.

Two poor free kicks, both short, from Paddy Woodgate left the score board unchanged before Barry Coffey extended the lead out to three and then four with Raheens yet to score with 40 minutes gone.

Paddy Woodgate finally found the range with a free after Dane Nea picked up a black card.

A long distant free from Woodgate fell short, Rob Thompson got on the end of the lose ball, twisted and turned before his goal effort was blocked by Karl Hartley for a 45, Declan Campbell converting to reduce the deficit and when Liam Power added another point the lead was back to one with ten minutes to go.

Rob Thompson joined Nea on the side line having picked up a black card before Cian Costigan converted a mark to put two between the sides once again.

Kieran Dywer came up from his defensive duties to punch over; Raheens had a chance of a goal but Rory Donnelly hit a weak effort right and wide and while Robert Thompson returned to five over a free it was not enough as Sarsfields won 1-12 to 1-10.
A decent, hard-fought game but one can only speculate the strength of Sarsfields once many of their first-team starters return to action.