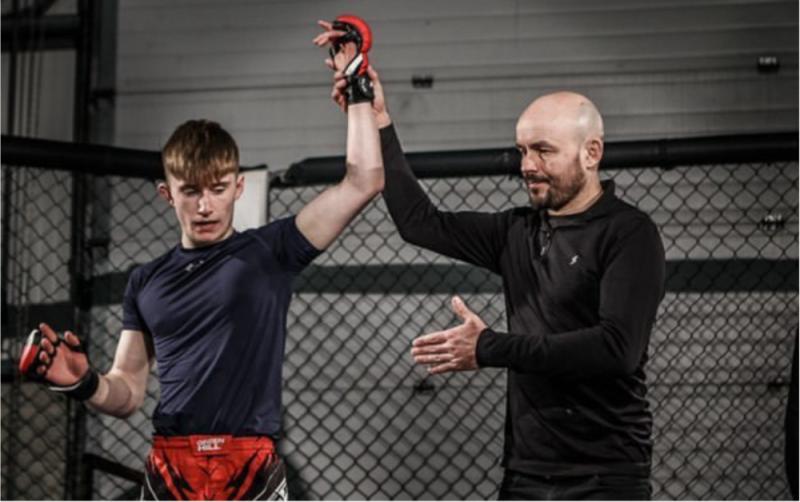 Jamie Doyle and three of his SBG Naas teammates have fought their way on to Team Ireland for the Inter-
national Mixed Martial Arts Youth World Championships this August in Abu Dhabi. Four young men who want nothing more than to represent their country in the sport they love are now looking for funding from donors and sponsors to get them to the championships.

Unfortunately, MMA is not recognized as a sport by the Government of Ireland so that means Jamie and his teammates Alex Keogh, Brandon Blake and Dan Podmisanins, must pay for all expenses involved costing €12,000 for them.

Expenses such as flights, accommodation, registrations and all other encompassing fees must be paid by each individual fighter that would normally be covered by government funding were it another sport.

“We need all the help we can get. It’s so upsetting for us that the sport isn't recognised in Ireland, for me, the lads and everyone. The work we have put in with our coaches who we want to represent,” Jamie explained.

“We are training twice a day, six days a week. It's a professional level of training, and it's a shame that we do all that and have to worry about funding then. I'm here stressing having to get funding to represent my country in something that I love whereas if I was in another sport, such as boxing, I wouldn't have to.”

The 16-year old's route to Team Ireland has been nothing short of inspirational. Initially taking up martial arts as a last resort following struggles with bullying Jamie has now qualified twice to don green at the IMMAF world championships.

“I have been doing MMA since I was around 11. The reason I got into it, like a lot of kids, I was being bullied. I tried GAA and other sports, but that didn't work for me. When I started it wasn’t so much that the bullying stopped but it was that my confidence went through the roof. That’s what made the bullying stop, just being able to stand up for myself,” Jamie said.

“It was tough because I was diagnosed at a young age with Asperger's, which is on the autism spectrum as well as dyslexia and ADHD. For me going into a gym, an atmosphere like that where it can be loud, lots of people and a contact sport, it wouldn't have been my thing at all. I don't know what happened, I just fell in love with it and it is the best thing to ever happen to me.”

Bullying and mistreatment is something that so many people can empathise with and Jamie’s journey through that struggle started one day after school.

“My Dad came home and I had broken down crying about these kids that wouldn't leave me alone, the stuff they were saying to me and I didn't know what to do. I never wanted to fight or get into anything with them but he just came home with the timetable for a jiu-jitsu place and I didn't want to do it.

“He brought me up and it was tough. The coaches were great with me especially in those first couple of days that I wasn't myself. Like anyone else, regardless of why they are there, you’re nervous and worried about it.

Initially heading into Dublin for training, Jamie now trains out of SBG Naas and makes the trip up the M7 multiple times a week from Portarlington.

“It doesn't matter what age you are, you will be nervous the first time and a lot of people have a negative perception of MMA and jiu-jitsu. But it's incredible how different it is to that perception, it’s such an open and loving environment,” Jamie said.

Many years on from going to train to build his confidence Jamie, after being advised by his coach, was training to make it on to Team Ireland for 2019. Jamie made it onto the team that year after a selection process done via training sessions.

“They only started doing youth championships in 2019 and my old coach Phillip said to my dad about going to this training session to get onto the Irish team for the IMMAFs. I went to a training session in Cork and in Paddy Holohan’s gym and I got picked for the team but it was just kind of a show up and there might not be much on your weight and I got picked automatically really because nobody was at my weight,” Jamie recalled.

“It wasn’t that I wasn’t working hard but I felt within myself that I didn't truly deserve it. The Championships were in Rome and I lost but it was a great experience for me.”

The qualifying process in recent years has become much different.. MMA is still a rapidly growing sport and the casual selection process from 2019 was ditched and to qualify to represent Ireland at the premier level of world youth MMA was much harder.

“Last year you had to fight for your place. But Covid was going on and I hadn't trained in months. I was just going on runs because my gym had shut its doors so I would have been against lads who were training through that time so I decided not to go for it. I found out later I would have been picked so that was heartbreaking,” Jamie described.

Qualifying for this year’s championships would be the toughest test so far for any MMA athlete looking to represent Team Ireland. After a test-run in December 2021, the Irish MMA Association hosted the national championships in May of this year with the athletes told the tournament would impact their prospects of representing their country for the IMMAFs.

“If you came first or second you knew you had a great chance to be on the team. At the championships, I won my first two dominantly. I was in control of the rounds and finished with submissions. Then I fought my teammate Alex in the final and he won but we both knew we were surely on it,” Jamie explained.

“We are the featherweight fighters for Ireland this year and I really felt like I earned it, compared to 2019 where I was just picked. I feel this competition style process of getting on the Irish squad has really improved the team too.

“I'm just so grateful for the effort our coaches Sergey, Jenna, Cian and Peter have put in with us to get us to where we are. I just hope we get the chance to show that.” Jamie and his teammates have earned their places at this tournament and they are now appealing for support from the public and potential sponsors to get involved in their journey.

“I know how for Alex, Brandon and Dan it’s so important. It’s a huge thing for all of us right now but it's also to help us reach bigger goals in our futures,” Jamie said.

This piece was done through the lens of Jamie’s experience but this is just one of many stories of young athletes in Ireland who are attempting to realise their dreams. The young man himself was keen to reiteratedespite discussing his own journey; he wanted this as much for his teammates and their progression as a group as he did for himself.

The team’s goal is to raise €12,000 (with €1,000 raised already) to include flights, accommodation and many more costs. You can donate through their GoFundMe ‘Help us get to the World Youth MMA Championships’ or see @jamiedoylebjj on Instagram to see more ways to give.

This is not the first time this fundraising has been forced to occur due to the lack of government funding. The most recent Irish visit to the IMMAF’s was funded by MMA superstar Conor McGregor who provided the full funding for the trip.

These young men and women across Ireland have expressed their appreciation for the donations that they so desperately need.

But in addition they are calling for reform and acknowledgement of the existence of the sport that they love.