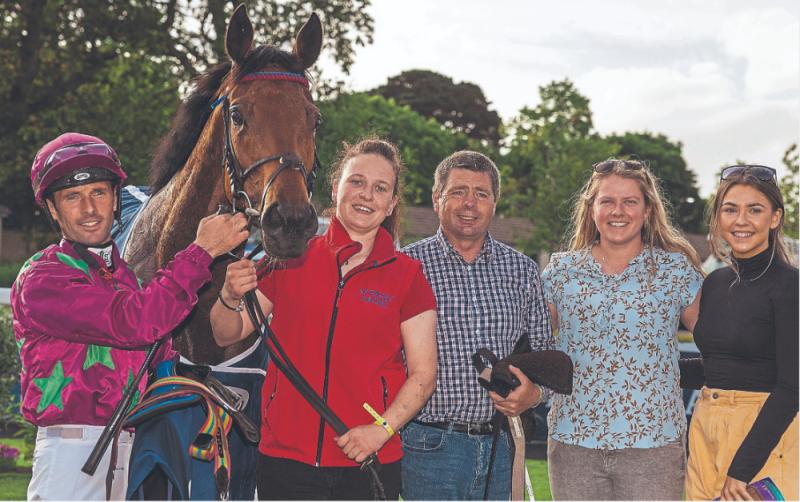 Ken Condon supplied Billy Lee with his fifth winner of the week when Marhaba Ashmayme won the concluding eight-furlong maiden at Limerick on Saturday.

A strong 6/5 favourite, the three-year-old made virtually all the running to score by a length and a half from the Denis Leahy-trained Blueberry Jack.

Willie McCreery won the handicap over the extended six-furlong trip with the Nathan Crosse-ridden Cnodian. A 15/2 shot in the colours of her breeder Noeleen O’Toole, the four-year-old had half a length to spare over the Richard O'Brien-trained Cleveleys which was ridden by the winning jockey’s brother Shane.

Johnny Murtagh sent out easily the longest-priced winner of the day as Deceit won the 11-furlong handicap in the colours of Qatar Racing. Ridden by Shane Kelly, the 28/1 shot was nicely on top when beating the Billy Lee-ridden White Strand, trained by Tom Hogan, by three-parts of a length.

Silken Leader continues to improve and the Joe Murphy-trained three-year-old landed the seven-furlong handicap in fine style under Gary Carroll at Gowran Park on Sunday. In the colours of Tom Egan, the strong 5/4 favourite led early in the straight to beat the Joe Murray-trained Hot Sunset by an easy three and three-parts of a length.

Peter Fahey landed a back-to-back course and distance success with Angel’s Trumpet which just prevailed under Leigh Roche in the second division of the eight-furlong handicap.

The Festival Dreamers Syndicate-owned 13/2 chance gained a narrow advantage inside the final furlong and held off the late flourish of the Paul Flynn-trained 4/1 favourite Tashim by a head.

Johnny Murtagh and Danny Sheehy combined to win the apprentice handicap with the Nanboku Syndicate-owned Eighty Eight. The 5/1 shot came from off the pace to beat the Johnny Feane-trained 7/2 chance Urban Oasis by two and a half-lengths.

Jessica Harrington saddled he easiest winner of the day as the Shane Foley-ridden Sierra Navada ran away with the fillies’ maiden over the extended nine furlongs. The 7/2 chance made all the running and stretched clear from the furlong pole to beat Willie McCreery’s Any Dream Will Do by six lengths. Charles O'Brien’s runner in the race shares the same name as the winner but she made it easy for commentator Peter O’Hehir when finishing back in eighth place.

Ken Condon saddled back-to-back winners at Fairyhouse on Friday with Billy Lee and Joey Sheridan the successful jockeys.
High-flying Lee took the three-year-old handicap over six furlongs on the Treadstone Bloodstock owned Areille which led home a 1-2 for the stable when getting the better of the Sheridan-ridden Jupiter Express by half a length at odds of 15/2.

Sheridan got his turn 35 minutes later as the Charlie Bit Me Syndicate-owned Moss Tucker won another of the six-furlong handicaps. The 5/1 chance made all the running to beat Charles O'Brien’s Big Gossey by a neck.

A fifth success over hurdles for the Tommy Ward-owned eight-year-old, she led after the third last hurdle and made the best of her way home to win by two and a half-lengths from Andrew McNamara’s Lessofdnegativity.

Two Kildare conditional jockeys helped Henry de Bromhead to a double. After sending out a couple of early beaten favourites, he landed back-to-back winners late on the card, winning the two-mile beginners’ chase with the Cloud Nine Syndicate owned Cornerkova which scored a four-length success at odds of 11/1 under Conor Brassil before 7/1 shot Withallduerespect, ridden by Charlie O’Dwyer, took the handicap chase over the same distance in the colours of the One In The Barrell Syndicate.

Amateur rider Pat Taaffe gave County Carlow trainer Pat Foley his second winner in as many days when partnering the Dunne In Trim Syndicate-owned Brianna Lily to land the mares’ bumper. The 15/2 chance led early in the straight to beat the Andy Slattery-trained Lady Of The Vale by a length and a quarter.

Owned and bred by Redpender Stud, Helpmeout maintained the fine strike rate for Willie McCreery and Billy Lee when taking the eight-furlong handicap at Leopardstown on Wednesday evening.

A strong 7/2 favourite, the three-year-old led inside the final furlong to beat Gavin Cromwell’s The Last Swallow by just under two lengths.

Dermot Weld beat McCreery to the line to win the nine-furlong fillies’ handicap with Giladah. Another well-supported 7/2 chance, she raced up with the pace under Chris Hayes, leading at the furlong pole to score by half a length from the Nathan Crosse-ridden 3/1 favourite Coill Na Sionainne.

The Triona Burbage-owned Complete Fiction had a little more in hand as he won the handicap over the same distance. A 28/1 chance in the hands of Rory Cleary, the Jarlath Fahey-trained five-year-old beat the Tom McCourt-trained Philly’s Hope by a length and a quarter.

Willie McCreery landed the five-furlong maiden at Cork on Wednesday with Funchal which was ridden by high-flying Billy Lee.