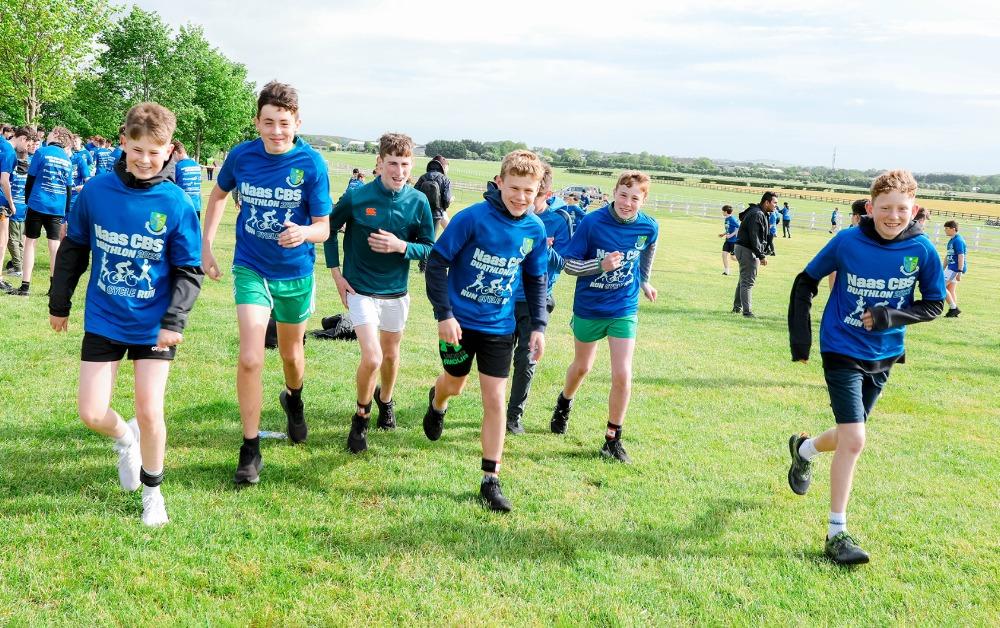 Over 300 Naas CBS students took part in a duathlon event at Naas Racecourse on May 20. Organised by the CBS Parents’ Council, the duathlon is one of many annual sporting events hosted by the committee since 2011, when the inaugural Naas CBS triathlon was launched. Proudly supported by Naas Racecourse and Fitzpatrick's Garage Opel Naas, sponsors also included Fitzsimon’s Finance, Cross Insurance Ltd, Halligan Transport Ltd and Naas International Immersion Programme.

Ben Travers, Naas CBS Principal, said: “I warmly thank our Parents’ Council for organising yet another super event for our pupils. Sport and well-being is at the very core of our school ethos and it is great to see so many of our pupils take part again in this event. Of course, the organisation and conduct of the duathlon would not be possible without the support of our main sponsors, who I also thank sincerely.

“I pay homage to the many local businesses who have supported the event, including those who provided the goody bags of water, fruit and snacks - Queally Group, Boran Packaging Ltd, Swans on the Green, Salmon’s Centra Monread and Super Valu Naas – and those who provided spot prizes - Expert Electrical, Colgan Sports, Cahill Cycles, Andy's Barbers, The Men's Room, Hawk & Blade, Old County Barbers and Bikeology. My thanks to Naas Triathlon Club who provided bike racks and to the Order of Malta for their services today. It is wonderful to see such wide and continued community support for our boys.”

Chairman of the CBS Parents’ Council, Frank Murphy, said: “We are delighted to be back hosting a sporting event in 2022, following a two-year absence due to Covid restrictions. As ever, the main purpose of the duathlon is to encourage the students to take on a healthy and rewarding outdoor challenge. The duathlon consists of three consecutive challenges around the racecourse; a team or individual must complete a 1500m run, followed by a 6km cycle and then finally, a 1500m run. Above all, this is a fun event that the students have come to enjoy each year.”

The year 2021/22 has been peppered with an extensive list of tremendous sporting accolades for Naas CBS pupils of all ages, across athletics, badminton, soccer, rugby and football. Students brought home a range of medals from the South Leinster Schools Track and Field, represented Kildare on the winning Leinster U20 Football Championship panel and were team members at Naas Rugby Club, who won the U15 Leinster Premier League. The Naas CBS badminton team took home the Leinster U19 Badminton Division 1 Shield and finished with Silver at the All-Irelands. The Naas CBS U16 football team were crowned Leinster Champions, whilst the U17 soccer team won their Midlands League Final.

A momentous sporting win and one for the history books, Naas CBS Senior Football Team is the first-ever Kildare school to win the Hogan Cup. Crowned All-Ireland Senior A Football Champions, St Patrick’s Day 2022 will live long in the players’ and the wider Naas CBS community memories.

Harnessing their increasing sporting successes and seeking to further develop students’ potentials, Naas CBS has been granted planning permission for an all-weather playing facility. The school will seek to engage support and sponsorship from the Naas community and businesses in the next year. Sponsorship enquiries can be directed to Frank Murphy, Chairman of the Naas CBS Parents’ Council.

All photos by Aishling Conway