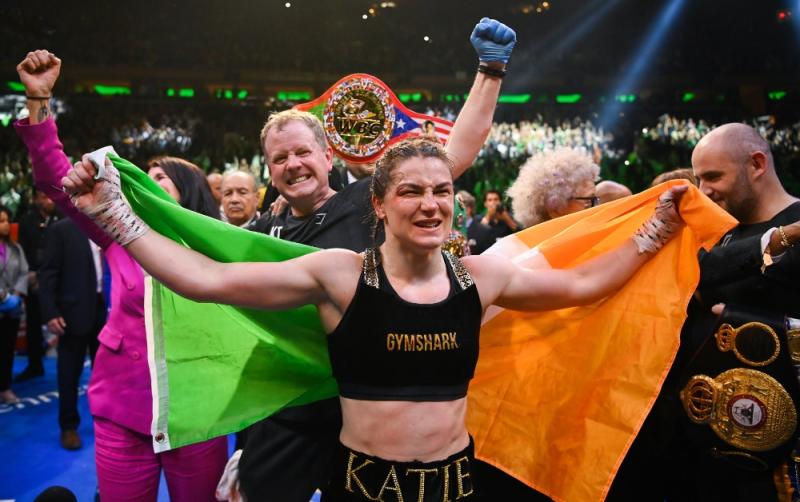 I was at Katie Taylor vs Amanda Serrano and I am going to do my best to do it justice and describe what it was like to be at a once in a generation event.

I’ve never been one for praising both sides of a sporting fixture just for the sake of it. Especially when it comes to women’s sport, I feel a lot of the major events in soccer such as the FA Cup final coverage are reduced to ‘look how far we have come’ instead of analysis before or after an important game.

There was none of that after this fight because frankly there couldn't have been, nobody would have cared about the crowds or women’s boxing’s progression on the night, that talk was for later. When that fight ended all anyone could look at the person next to them and say was “f—ing hell what a fight.”

With all that said, I have to credit both sides of this encounter, even before they went to war with one another. It was only after the fact I got to see Serrano’s pre-fight moments and they were baffling, her and Katie faced-off in the ring and she said “this is crazy” with a smile ear to ear only blocked by a mouthpiece. She was in awe of the occasion, so was I to be fair, but I wasn't fighting in a couple of minutes.

I reckon my heart rate might have been higher than hers at that exact moment. Even for Serrano, a been there and done it, one of boxing’s greatest ever, that is a staggering level of cool. To look your opponent in the eyes and attempt to share a moment of acknowledgement of both of your achievements BEFORE the fight itself is for the lack of a better word, mad.

If you think I am over-selling this, I’m not. All you would have to do is look at Katie’s face when her opponent said those words to her so gleefully to know how mad it was, she was bemused, you could see on her face that for a moment she had to mentally shake it off.

She was in seek and destroy mode and Serrano was looking around at the crowds with a wonder I can only liken to a child at the zoo. If Serrano had been finished early in the fight or not performed this moment would have been looked at as that the occasion was too big for her. But the reality is this woman has a switch, and when that bell rang just moments later, the smile had disappeared and it was time to swing some leather. And by god did they.

I was able to notice more in Katie’s entrance at the time as she slowly walked slowly to the ring clearly taking everything in, albeit in a different way, and looked upon what she had built. The greatest showpiece in women’s boxing history with her name at the top of the bill in a packed Madison Square Garden. Ali, Tyson, Taylor, all headline acts at the Mecca of boxing.

She absorbed the feeling of the crowd, energised by the thousands screaming in adulation of an Irish icon but it didn’t dare quicken her step. She plodded to the ring, looking around at the crowds like a Roman gladiator entering the Colosseum.

It is genuinely difficult to not use tropes and overused phrases when describing the occasion, as a journalist it shames me to say I was lost for words both at the time and now to truly get across the staggering nature of it all for Katie as she made her way to the ring. She had us all in the palm of her hand, it was reminiscent of professional wrestling in its cinematically perfect nature. She did it the way the Undertaker would make his way to a WWE ring, not a remote sense of urgency knowing she was the star, the champ, the one we’re here to see.

But once again, the hype for this fight wasn’t based around the growth of women’s boxing or the first women’s main event of Madison Square Garden, the reason there were asses in seats that night was because it was two of the best ever in their sport about to throw down.

The bell rang and I have rarely seen anything like it. About half way through I began to think the minute break at the end of each round was for me to catch my breath and the two of them going to battle was being interrupted so the crowd could recover.

If Katie won this fight she was an Irish legend, if lost she was an Irish legend. But there is so much before the result, within those rounds, that can propel a fighter towards being an icon. Katie could have won easily and that would have been amazing, although unlikely against someone of Serrano’s calibre but anything can happen when swinging from the hip.

But rounds five to 10 are the ones that raised her even further up in estimation of all who watched. Many of us probably didn't know that was possible, that we could hold Katie Taylor in even higher regard.

Round five, Serrano catches her with a stunning strike, Katie is rocked, stumbling towards the Puerto Rican she eats multiple more in a time period that felt like an eternity before we hear the sweet release of the bell. It all looked ever so bleak, the younger fighter had seized control of the fight half way through and had a round for the ages. Nobody wrote Katie off but we can't say the signs were good.

The recovery from a round of that nature, to bite down on that gum shield and march forward and retake control of that fight is what legends are made of. It was her Rocky moment, the uphill battle to finish the fight in the ascendancy landing booming power shots of her own while wearing the scars of one of the greatest fights a storied arena had ever seen.

If your cynical mind is thinking, she’s a boxer, it’s what they do. You’re right in a sense, but not really. There is a reason inspiring comebacks in combat sports are held in legendary regard, it's because they are beyond rare.

Rocky isn’t real, most fighters don't come back to reach their ultimate goal, most boxers fold in round five or get taken out in round six. Even if they don't, they absorb a career’s worth of head trauma on their way to a decision loss. The fairytale doesn't come true for most and you finish your dream fight on your back staring up at the lights asking your coach what happened. You only remember the ones that came back and did it but most of them don't.

The greatest of all-time.