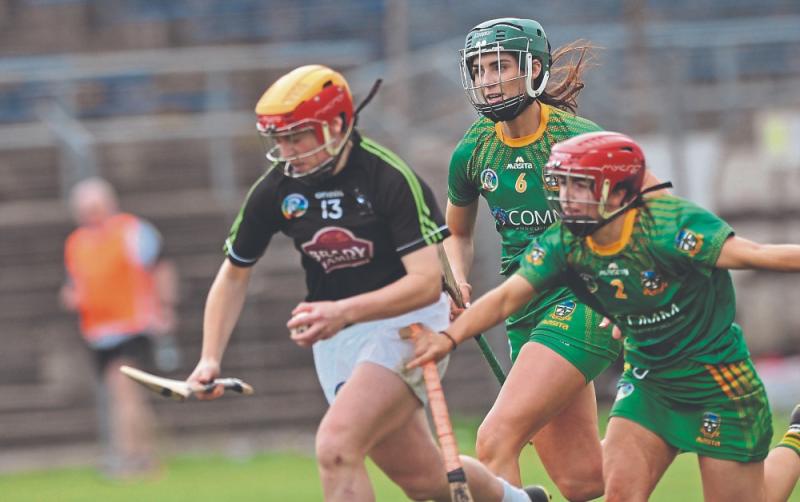 Meath were named Leinster Intermediate Camogie champions after a fantastic battle against Kildare in Aughrim on Sunday.
It was a brilliant game from start to finish, with very little to separate the sides during the contest.

It was Meath who found the first score of the game through a point from Aoife Minogue. The Lilywhites responded instantly with a point from Emer Reilly before Sara Carroll rattled the back of the net, giving Kildare an early advantage.

The sides were evenly matched across the pitch, with the two teams looking to use their dangerous full forward lines at every available opportunity.

Meath’s Amy Gaffney and Sinead Hackett showed their attacking strength in abundance during the first half with the full forward and wing forward linking up excellently between the lines.

Gaffney and Hackett added a score each before Aoife Minogue’s effort from the guts on 45 yards out caught out Kildare goalkeeper Eimear Sterling to give her side the lead.

Despite conceding against the run of play, Kildare continued to try and break down the strong Meath defence. Deirbhile Byrne did cause Meath some trouble when given the ball in the right areas.
Emer Reilly added another free to her tally before Kildare found the back of the net for a second time in the opening 20 minutes.

Deirbhile Byrne’s pace and power proved to much for Meath as she sent the Kildare faithful ecstatic in the stand .
The battle in the centre of the park between Emma Kielthy and Ellen Morgan against Meath’s Ellen Burke and Aine Keogh was a fascinating watch. All four players impacted the game massively whether it was from their ability under the high ball or showing their endurance during a hot afternoon in Wicklow.

Sinead Hackett and Amy Gaffney kept the pressure on Kildare in the build up to the interval with another couple of scores, but Kildare’s Emer Reilly was a huge asset over the dead ball and she sent another two points over just before the break.
Anytime Kildare found themselves in a dangerous area inside the Meath half, Reilly’s free taking qualities proved to be a big plus for the Lilywhites.

Sinead Hackett’s point on the cusp of half time brought Meath to within a point of Kildare at half time with the scores at 2-4 to 1-6.

Thankfully, the second half started in the same fashion as the first with both sides showing no signs of decreasing the tempo of the game. Meath equalised within 60 seconds of the restart through a free from Sinead Hackett before Kildare’s Emer Reilly slotted over two frees of her own to give her side some breathing room.

Kildare’s lead could have been stretched even further if it wasn’t for the post with Nicole Malcolmson and Emma Kielthy both being denied by the upright with a quarter of an hour remaining.

Meath continued to try and break down the Kildare defence but some brilliant individual performances from Emma Barry and Maria Doyle made that difficult for Meath.

Hackett added another point to her tally shortly after before substitute Jane Dolan levelled the scores once again from an acute angle.

Emer Reilly and Amy Gaffney traded scores before Aedin Slattery got her name on the scoreboard with a great score for the Royal County.

Meath took the lead for the first time since the start of the first half with a fine score from Tracy King and a 45 from Sinead Hackett to give Meath a two-point lead with just under 55 minutes played.

Emer Reilly sent another free between the posts for Kildare before Aine McInerney sealed the win in injury time, crowning Meath as Leinster Intermediate Camogie champions.