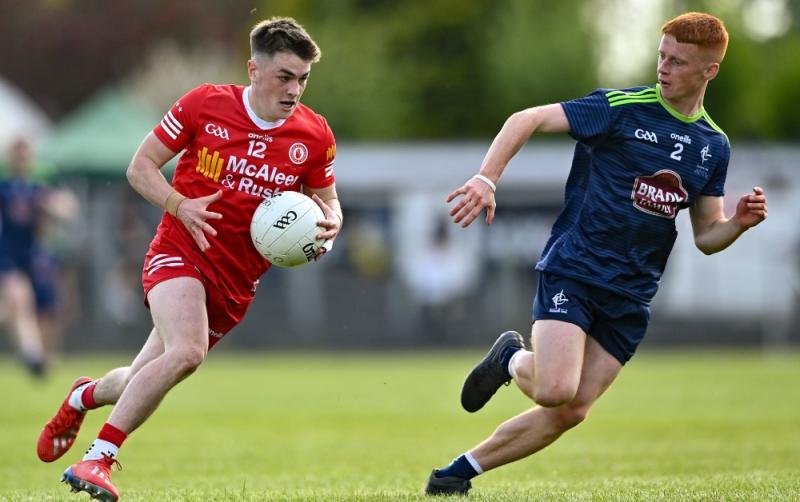 A goal inside 25 seconds of the start from man-of-the-match Ruairí Canavan; responded within 90 seconds by Kildare with centre foward Daniel Lynam palming to the net from an Eoin Bagnall centre, but it ended in a bit of a whimper as Kildare played second fiddle for most of the game with Tyrone being crowned All-Ireland U20 football champons, a result that was on the cards a long, long way before the final whistle.

In fairness to Brian Flanagan's boys they kept plugging away even if the extremely competitive Leinster campaign, no doubt, took its toll, as many felt the exerctions of the past five weeks or so but right to the end they were attacking, albeit without ever putting their opponents under any real pressure once they opened a five point gap before the half time break. You can find Flanagan's match reaction below.

Kildare manager reacts to U20 All-Ireland final defeat to Tyrone

Brian Flanagan says they have no complaints over their defeat

Six points between the sides in the end, it could have been a lot more, a good bit more and in the end there were no complaints, no hard-luck stories and no wondering what might-have-been.

At sun shone brightly at the picturesque Avant Money Páirc Seán Mac Diarmada, Carrick-on-Shannon on Saturday afternoon with some 3,000 fans making a fine atmosphere as the game got under way at five bells.
And what a start.

The ball was thrown in by Mayo referee Liam Devenney and within 21 seconds Kildare 'keeper Cormac Barker was picking the ball out of the back of his net as the Kildare defence was caught completely cold from the start with players standing yards of their markers and a swift move ended with Canavan giving the Kilcullen net-mider no chance with a blistering shot.

That set-back however, did not deter The Lilies, lining out in their bottle-green away shirts. Kildare responded with a quick-fire movement down the left hand side and when Eoin Bagnall gained possession he sent a perfect pass to the unmarked Daniel Lynam, the Caragh man making no mistake palming the ball past Stephen McMenamin.
What a start, less then two minutes and the score standing at a goal apiece.

Coor Cush set up Ciarán Bogue who got the first point of the game with the second coming on eight minutes, a brilliant cross-field pass found Dan Muldoon in space and he made it 1-2 to 1-0.

Niall O'Regan got the first of his points a minute later but Tyrone midfielder Ciarán Daly had the lead back to two soon after.
Little between he sides at this stage with Kildare gradually getting more possession and that possession was transferred to the score board when Luke Killian, who had a fine game, found O'Regan and the Celbridge reduced the game to one.

Having their best period of the game, Shane Farrell combined with Dean O'Donoghue who split the posts keeping up his scoring in every game of this campaign leveling the game at 1-3 apiece with just 11 minutes on the clock.

A Kildare effort fell sh0rt before Eoin Bagnall edged Kildare in front for the first and only time with a converted free from 45m l line but that was as good as it got for Brian Flanagan's side.

Niall O'Regan, who had a fine opening half, denied Ruairí Canavan with a brilliant block but Tyrone soon leveled with a mighty effort from wing forward Conor Cush.

Suddenly Tyrone took control and with a string of points from Canavan, Daly, Niall Devlin and James Donaghy suddenly Tyrone opened up a four point lead, 1-8 to 1-4 on 27 minutes.

Eoin Bagnall (free) reduced the deficit but it was the boys in red who had the final say of the half with wing back, Niall Devlin hitting a beauty to leave the half-time score reading Tyrone 1-9 Kildare 1-5.

Kildare looked in big trouble at this stage and with the stiffish breeze on the backs of the northern boys in on the resumption it was going to take one almighty turnaround if The Lilies were to be crowned U20 champions for the second time in four years.

A few quick-fire early points was certainly what was required but two quick wides did nothing for the cause as Tyrone showed that only had their some top quality forwards, they also had some excellent defenders as the squeezed and squeezed many a Kildare forward move.

Five minutes in the lead was pushed out through a Ruairí McHugh point. Eoin Bagnall pointed but that was replied to by another from the impressive Niall Devin to leave it 1-11 to 1-6, 43 on the clock.

One got the impression that Tyrone were more than happy to sit back, defence as Tyrone do and then break with speed and with accuracy.

Kildare kept at it, Tommy Gill reduced the gap but two wides followed and when Ruairí McHugh fired over the lead once again stood at five, 1-12 to 1-7, 46 gone.

An Eoin Bagnall was waved wide, although many felt it went inside before Darragh Swords reduced the game with some nine minutes remaining.

Any hopes or thoughts that Kildare had of making a flying finish was ended with Ruairí Canavan raising two white flats inside two minutes, the first a free.

Bagnall converted a free but there was no denying Tyrone who now sensed they were well on their way to taking the title.
Points from no. 14 Michael McGlennan, who had a big influence in the opening half around the middle and substitute Gavin Potter, Canavan were replied to by Luke Killian and Adam Fanning as Tyrone led 1-18 to 1-12 with the clock moving into time added territory.

Two more white flats from Canavan, they were replied to with a Luke Killian effort as the announcement was made naming Ruairí Canavan as man of the match.

No complaints.
Kildare gave it their all but on the day played second fiddle, the legs went well before the finish and while they kept at it to the end, the result was a foregone conclusion long before the Mayo official brought the game to its inevitable conclusion.