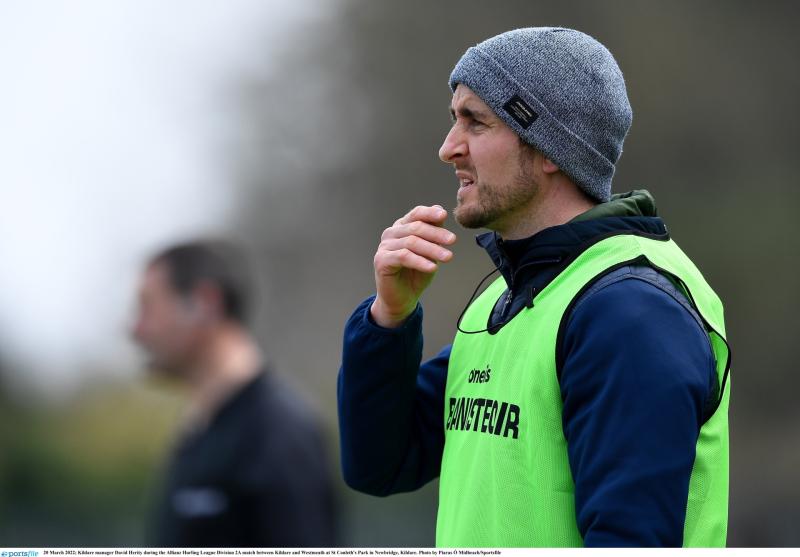 Speaking to the press after the game with a ready-to-go curry in one hand a few hurdles in another Kildare manager, David Herity was happy to get another win under his belt, happy with the final scoring tally, yet, like most others not entirely pleased or satisfied with the overall performance on he day.

“We got a win, again, that's what you want to do first and foremost, all the other things there you want to look on, look back on the video but the sending off (London player) ruined the game as a competition; we were up a few points after a slow enough start, but at that stage you know it was going to fizzle out that way, it is disappointing though but we got another six lads (one blood sub) game time in the second half, ran up a good score but the only things you would have to be disappointed with our work-rate today, the stats show that and when you are dominating a game you have to really put the foot down and we didn't do that today, conceded three goals (one an o.g.) and then those late scores, they are the things we will be looking at.”

This coming week Kildare will be playing Derry, the team looked upon by most as Kildare's biggest threat to winning the Christy Ring, the Division 2B champions and one that should tell us a lot more about both.

Yet David Herity admitted that his side against London, looked a bit nervous.
“I think everyone is looking eager, everyone wants to try and get on the score sheet, especially when you have a big wind, but we had lads shooting from ridiculous angles there just to try and get on the score sheet, and we have told the players it doesn't matter who scores, just give it to the man in a better position but conceding that early goal and it wasn't just any goal, it was an own goal, so that probably made them somewhat nervous but I would be happy, we got ten scores without reply coming up to half-time; all learning curves, I was delighted the way the team bounced back after conceding the two early goals but yes, our touch was a little bit sloppy, the game was delayed, not making that an excuse but you could see it threw things off a little bit” a tasty game to look forward to next week, no doubt.”