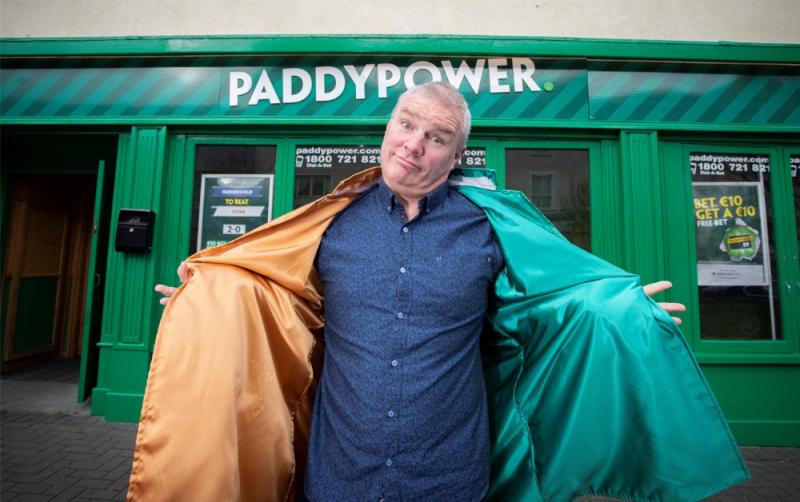 'The Turncoat' designed for Kildare's clash with Kerry this weekend

Cheeky bookie Paddy Power have revealed their own bespoke designer fashion item in a hat tip to ex-Kerry All Star Paul Galvin as he joins the Kildare GAA set-up. Galvin's move is the reverse of the one Jack O'Connor made prior to the 2021 championship season, leaving the lilywhites in the lurch for a return home.

‘The Turncoat’ is a beautifully designed reversible jacket produced specially to mark the occasion of Kildare GAA’s Division One clash with Kerry at St Conleth’s Park in Newbridge on Sunday.

“Much like the half-and-half scarf, which may well be the most hated thing to come out of the Premier League, our turncoat allows you to switch sides in the blink of an eye,” spokesman Paddy Power (pictured), said.

“We know Mr Galvin has an eye for style given he has his own fashion label, so we hope our new clothing item meets his standards.”

Kildare remain the underdogs going into the clash at odds of 11/2, while the Kingdom are currently odds on at 1/8.

But as part of their turncoat campaign, Lilywhite retail customers attending the match in Newbridge can avail of special odds in Paddy Power’s two shops located on the Main St, directly opposite St Conleth’s Park.

In a nod to the debut of ‘The Turncoat’ and their runway fashion debut, the bookie will offer enhanced odds of 11/1 on Kildare to win, but only to Kerry turncoats, and Kildare fans can avail of a boosted price on Kerry at EVENS.

He continued: “Jack O’Connor followed in the footsteps of another legendary Kerryman in the shape of Mick O’Dwyer when he joined Kildare. But unlike ‘Micko’, his departure has left a bitter taste in the mouths of many Kildare supporters. They’ll be hoping Paul Galvin sweetens the deal. Either way, our turncoat offer should do the trick.”

Kildare's opener with Kerry 'will not define season'

Meanwhile, Kerry legend Aidan O’Mahony also weighed in on the debate earlier in the week in his exclusive column with Paddy Power saying “When Kerry was beaten by Tyrone in the All-Ireland final, Jack O’Connor made it known that his heart is at home and he wanted the Kerry job. He was obviously Kildare manager at the time, so from the perspective of Lilywhite supporters it’s like when a manager moves from one club to another in the Premier League. You’re never forgiven once you move. When there’s a breakdown and you leave mid-season, it’s never going to end well. As for the welcome he gets from them this weekend, I’m not sure they’ll be too kind to him”