Kildare push Kerry all the way to earn draw 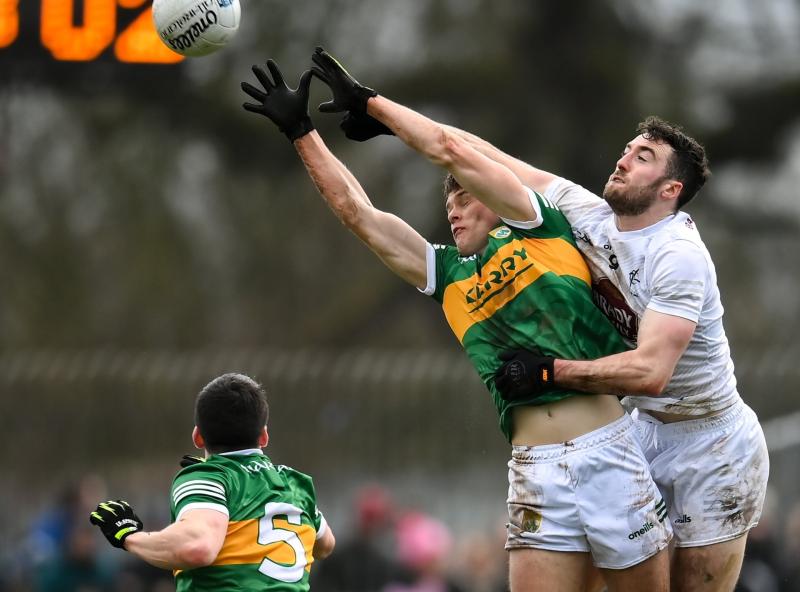 Gavin White of Kerry in action against Kevin Flynn of Kildare during the AFL Division 1 match at St Conleth's Park in Newbridge, Photo: Stephen

Kildare collected a well-deserved point in the opening game in the AFL, Division 1, when holding Kerry to draw at St Conleth's Park, Newbridge, this afternoone; in fact such was the dominance of Kildare in the second half that it looked like Kerry were more relieved that the home side to her the final whistle.

In a rip-roaring game before a full house in Newbridge Kildare trailed at half by four points, 1-7 to 0-6, Kerry getting a somewhat sloppy goal after five minutes, Killian Spillane poking the ball to the net.

Kildare never flinched and while they trailed by four, they were still in showing tremendous appetite, courage and work-rate.

The second half saw Kerry get the opening point befor Kildare took control reducing the gap to three, before Kerry stretched it back to four on 58 minutes.

However The Lilies came stroming back with two points from Paddy Woodgate and two from Jimmy Hyland, the leveler from Hyland after a brilliant move involving Daniel Flynn and Paul Cribbin saw the Kildare man fouled and Hyland did the rest.

A tense last few minutes before the final the final whistle arrived, and a well-deserved draw for Kildare.'