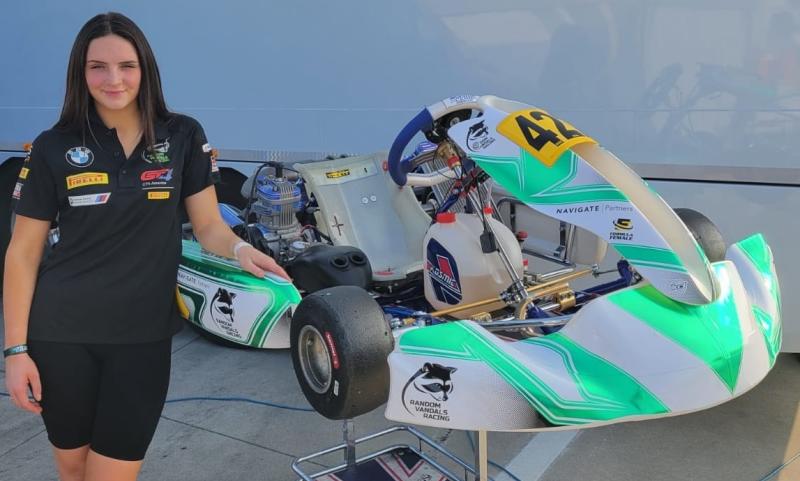 A native of  Newbridge, karting star Alyx (17) is currently competing in the Senior X30 karting class in Ireland, the UK and Europe and has recently returned from the IAME World Finals in Adria, Italy.

Alyx follows her family’s racing tradition. Her father Gary and uncle Aaron both competed in motorsport. Since she first started racing at the age of eight in 2013, Alyx has made a name for herself as a star of the future. She has impressed continually in Ireland and abroad, including qualifying three times for the IAME International Finals, one of the most-renowned karting races in the world, against 140 of the top international drivers.

RVR Team Principal Paul Sparta is a long-time backer of young talent having supported Conor Daly from the age of 17, a relationship that continues to this day, and has been a significant ally of Formula Female since its launch in 2018.

As the newest member of the Random Vandals Racing team, Alyx will make her sportscar debut this coming February 18 - 22 at famed Road Atlanta with the American Endurance Racing series in a BMW M2 CS Racing with co-drivers Jessica Tracy and Drew Wikstrom. The event will be two 8-Hour races on Saturday and Sunday with practice and qualifying Friday.

Paul Sparta, Random Vandals Racing Team Principal and Driver said: “I am delighted to welcome Alyx to the team. We have been keeping an eye on Alyx in recent years and have supported her karting this year. Talented young drivers like Alyx need early exposure to a variety of motorsports as well as lots of race seat time and a professional environment to make the most of their opportunities. We feel that now is the right time to offer our support to help her build on what she has achieved so far. RVR is a big supporter of Nicci Daly’s Formula Female program, and we hope to do more in the future.”

Alyx Coby said: “I am incredibly proud to be invited to join Random Vandals Racing. I’d like to thank Paul Sparta for his support so far this year and for providing me with the opportunity to step up to cars and race in the US. I’d also like to thank my management team Nicci Daly of Formula Female and Naomi Panter and Christopher Foster of Navigate Partners for their support. Random Vandals Racing is an amazing environment to be in, with all the support I need to reach my full potential, I am excited about what we can achieve together and can’t wait to represent Random Vandals Racing in 2022.”