One game away from reaching 2021 football finals 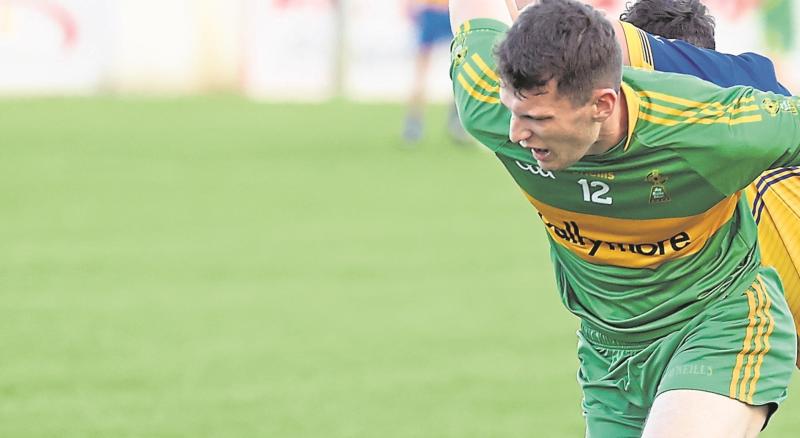 After an incredible number of weekends on the club scene we have reached the semi final stages of The Auld Shebeen Intermediate Football Championship along with the Tom Cross Transport Junior Football Championship also reaching that stage this Saturday and Sunday.
There is also one outstanding UPMC quarter final in the SHC remaining and this Saturday sees Ardclough, third place in the winners' group, taking on Coill Dubh, runner-up in the losers equivalent.

IFC SEMI FINALS
The first the IFC semi finals is down for decision at St Conleth's Park on Saturday afternoon when Ballymore Eustace take on Leixlip, in a game timed for a 4.45 throw-in.
These sides met back in August at Raheens in the opening round with Ballymore Eustace coming out on top by the minimum of margins, 1-9 to 1-8, in a game played in wet and windy conditions.
One thing for sure is that there won't be a lot between these sides and there is even a possibility that extra time just might come into play.
Ballymore topped the group with five points, just one ahead of Saturday's opponents.
The boys in green, apart from defeating Leixlip also got the better of Ellistown while drawing with Caragh, coming from a long way back to share the points.
Leixlip defeated Ellistown and Caragh while last weekend, after looking like they were in big trouble against Ballyteague in the quarter final, came alive in the final quarter to book their semi final spot.
Ballymore Eustace recorded an impressive win over Nurney last weekend and there is little doubt their confidence will be sky high for this weekend's clash
Expect another tight game, for Ballymore, Simon Murphy is enjoying a fine championship while he is receiving great back up from Sean Broderick at full forward, along with Brian Crowe, Caolan Halpin and Shane Barrett. Mark Barrett is a big player at no. 3 in an overall decent defence.
Leixlip are back in the semi final and will be hoping to make it all the way through but they will have to show a bit more composure if they are to succeed. They have in Jack Barrett a quality forward, Tommy Moolick in midfield, Jack Quinn in at no 3 while Paddy Meagher and Eamonn Murphy are proven players.
Expect a tight game but in the end it is Ballymore Eustace who get the vote to advance to the final.

The second semi final, on Sunday, also at St Conleth's is another intriguing affair with Kilcock taking on Sallins.
These sides have also met in the group stages, with Kilcock coming from two points behind with a few minutes remaining to defeat Sallins by two.
Kilcock are unbeaten this season with group wins also over Rathangan and Monasterevan while Sallins got the better of Monasterevan and Rathangan, knocking up some impressive scores on the way.
In the quarter finals last weekend Kilcock had an impressive win over Nurney while Sallins had an excellent three point win over Allenwood in their quarter final.
Very little between these sides, just as the first semi on Saturday and there will be no surprise who eventually books a final place.
However that win Kilcock recorded over Sallins showed a lot of doggedness and with some top class forwards in particular the likes of Shane O'Rourke, Sean O'Sullivan, Daragh McArdle along with Findlay Nair, they will be hard to beat.
Sallins are not short of some quality players of course and in Conor Herbert, Jamie Cox, James Dalton along with Paul Farrelly they won't be found wanting for scorers.
Another tight game expected with the vote going to Kilcock to shade it.

IFC SEMI FINALS
Rathcoffey and Robertstown meet in the first of the Tom Cross Transport JFC semis on Saturday, again at St Conleth's Park
Rathcoffey top the group after five games with nine points, their only dropped was against second placed Kilcullen.
Robertstown, Kill and Athgarvan finished on eight points each with Athgarvan the unlucky ones, going out to Kilcullen in the quarter final.
Robertstown are a side always capable of scoring goals, they have been here before and if they turn up on form will take a bit of beating.
Rathcoffey, under manager David Whyte, have enjoyed a great season and will not be short of confidence, if they are to succeed they will probably have to keep Robertstown from finding the net and that is a big ask so the vote goes to Robertstown, just only just.

The second quarter final sees Kilcullen take on Kill on Sunday also at Headquarters.
Just relegated a few months ago, Kilcullen will be hoping to make their stay in the junior ranks one of the shortest in history.
In Kill they face a formidable outfit at this level who went straight to the semi finals while Kilcullen had to get the better of near neighbours Athgarvan, something they did with a bit in hand although their second half display was not their greatest.
At the same time, one feels that The Rags will have enough to advance and while they will have to play to their strengths to advance, it is thought they will have that little too much for Kill on the day.

SHC QUARTER FINAL
Ardclough and Coill Dubh go into battle on Saturday in the opening game on Saturday in St Conleth's.
Ardclough operated in the winners' group lost to Celbridge and Naas, both fairly comprehensively, before getting back on the winning trail with a win over Confey.
Coill Dubh on the other hand finished second in the losers's section, defeated Clane and Eire Og CC before losing to Leixlip.
Very, very difficult one to call, injuries might just cost Coill Dubh and while neither would be expected to advance no further than the semi final, a very hesitant and tentative vote goes to Ardclough.