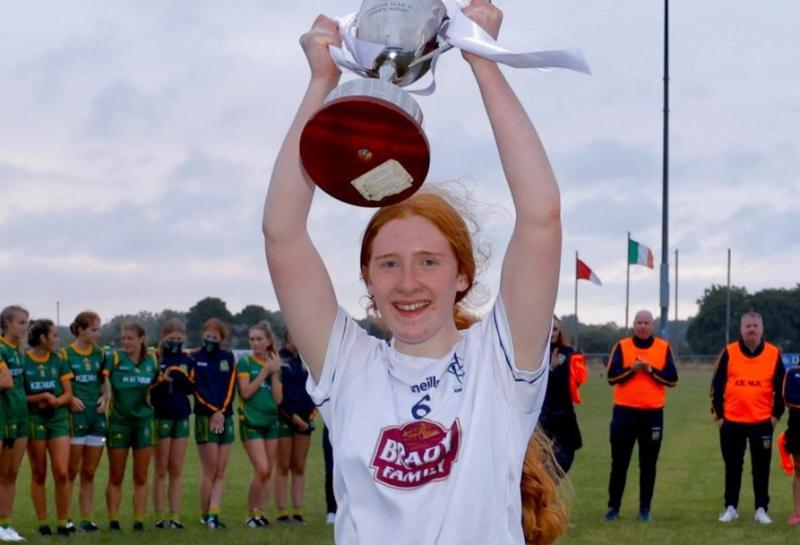 Kildare U16 Ladies captured the Leinster Football Championship following an impressive win over Meadh in Kinnegan on Wednesday. The final score showed The Lilies with 22 points to spare, 3-18 to 1-2.

It is the third time the Ladies have been crowned Leinster champions, the other wins coming in 2002 and 2018.

Kildare played Meath in Manguard Plus Hawkfield COE in their opening round game and had to come from behind very late in that game to secure victory with two late goals from Edwina Birchall and Grace Murtagh. Both teams had good wins against Westmeath to set up Wednesday evenings final.

Judging from the first game played between the sides in the earlier round it was expected this final to be a closely contested affair.

It certainly looked to be going to form as only two points separated the sides at the first half water break with Kildare leading 1-4 to 1-2 the Kildare goal scored just before the break  by Alannah Prizeman.

Kildare upped the tempo after the water break and kicked eight unanswered points missing some goal opportunities on they way only for the heroics of Meath keeper Vicky Carry but led at the break 1-12 to 1-2.
Kildare would lead at the halftime break 1.12 to 1.02.

Kildare continued where they left off in the first half with Leah McGovern pointing a free. Things got worse for Meath when Edwina Birchall was fouled by the Meath keeper in the square and a penalty awarded. Meath were reduced to 14 and Alannah Prizeman netted the spot kick.

Kildare took full  advantage of the numerical difference and Meath wouldn't score until just before the second half water break with a fine effort from Rebecca Harney. Both managers made changes and it was Meath that finished the game out scoring Kildare 1-3 to 0-1 but it was to little to late for the Royals as the damage had been done leaving the young Lilies victorious on the final whistle.

Player of the Match award went to Kilcullen's Edwina Birchall yet every Kildare player from 1 to 15 and the subs introduced must be commended on a exceptional game played.